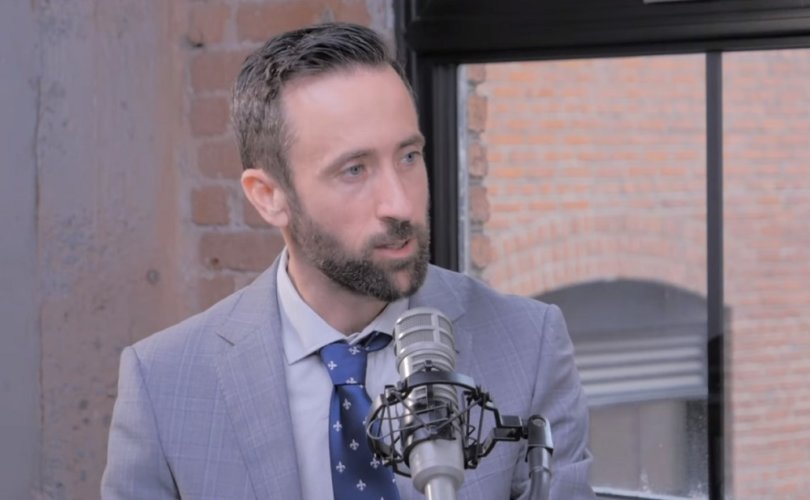 MONTREAL, Quebec, July 28, 2020 (LifeSiteNews) — With the Conservative Party of Canada sending out ballots to members to vote for its new leader, Campagne Québec-Vie president Georges Buscemi sat down with candidate Derek Sloan to quiz the rookie member of Parliament on a wide range of topics.

A 35-year-old father of three, Sloan is running against Toronto lawyer Leslyn Lewis, Ontario M.P. Erin O’Toole, and former Nova Scotia M.P. Peter MacKay. Members are to mail their ballots in by August 21, when the party will tabulate the results and announce the new leader.

Campaign Life Coalition has endorsed Sloan, as well as Lewis, in the leadership race.  Moreover, social conservative advocacy group REAL Women of Canada and parents’ rights group Parents As First Educators (PAFE) recommend Sloan as the first choice on the ranked ballot. Campaign Life is also urging pro-life Conservatives not to put either O’Toole or MacKay on the ranked ballot because of their pro-abortion, pro-LGBT policies.

Sloan was accused of racism early in the campaign when he demanded that Canada’s chief medical officer, Dr. Theresa Tam, resign over her ties with the WHO, which repeated Beijing’s false claim that the coronavirus, which originated in Wuhan, China, was not transmitted human to human.

He told Buscemi he would cancel Canada’s $850-million annual funding to the WHO, which gave out “political information” on the coronavirus and kowtowed to China by refusing to recognize Taiwan, which successfully contained the spread of the disease.

Sloan blasted Trudeau for partnering with a Chinese company “that’s connected with the Chinese army” to develop a COVID-19 vaccine, and for the prime minister’s “smiles and hugs diplomacy” with Beijing that “has gotten us nowhere.”

China is a “global bully” with “long-term plans [of] basically global domination.” Trading with President Xi Jinping’s communist regime is “a deal with the devil,” said Sloan.

“The only thing that China responds to is a show of strength,” he added. “We’ve never been more under the boot of China than we [are] now … and we’ve never been nicer to them.”

Sloan blamed the Liberals for Canada’s spiralling debt load, which he said is nearly one third of a trillion dollars, adding that the Trudeau government appears not to know where the money is going.

“It’s funny because a couple weeks ago, we realized we’d spent 100 billion more than we anticipated,” he told Buscemi.

Sloan stated his opposition to mandatory masks as an infringement on personal liberty, even as a number of Ontario counties, as well as the City of Toronto, are passing health orders mandating masks indoors as a measure to stop the spread of COVID-19.

“Life entails certain risks, and in a free country, we have to let people take those risks,” he said.

He is likewise opposed to mandatory vaccines.

“Medical treatment should always be informed and based on a person’s consent,” said Sloan. “I think any forced vaccine is troubling.”

Sloan stated his opposition to the Liberals’ Bill C-8, which makes it a crime punishable by up to five years in jail to offer help to minors to reduce their gender dysphoria or unwanted same-sex attraction.

In discussing Sloan’s 12-point pro-life platform, Buscemi asked how he would respond to the charge that by restricting someone’s “right to choose abortion, you’re hindering their self-determination.”

“How about giving the baby a choice? That choice ends the life of another human being. The baby is a human being. No one denies it,” replied Sloan.

“Listen, we all know that there’s a lot of women out there in difficult situations, who maybe are being pressured,” added the candidate. “This is not about judging someone, but this is saying, look, this is a real thing, where a real human life is being ended.”