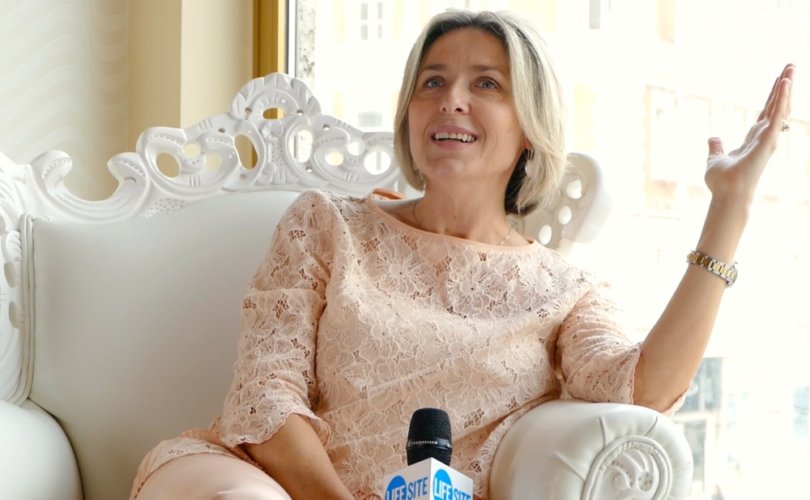 ZAGREB, Croatia, November 16, 2016 (LifeSiteNews) — On the outside, 34-year-old Sanja Orešković appeared to have it all — beauty, money, social connections. She was married to a successful husband. Together they had adorable children. The couple were the envy of their neighbors when they moved from cold Canada to sunny Puerto Rico, where Sanja filled her life with every luxury the tropical paradise had to offer – pristine beaches, fine dining, and dazzling social gatherings.

But inside, Sanja was a mess. Her life seemed meaningless to her. She was always looking for that “something more,” but when she thought she had found it, it never satisfied. It was never enough.

She began to wonder why she felt so depressed all the time.

“So I went to this beautiful doctor — I always say he was one of the angels on my path towards the Lord — and I was sharing my sadness with him,” she told LifeSiteNews co-founder John-Henry Westen in an exclusive interview in Zagreb, Croatia.

Sanja was given some pills that she hoped would “just calm me down and [allow me to] continue with my daily life as a mother, as a wife, and a friend.” But she sensed deep down that her problems could never be solved by mere pills.

It was during her final visit with the doctor that he asked her a surprisingly simple question that unexpectedly changed her life forever.

“He asked me a sentence that will always stay in my heart, ‘Sanja, do you pray?’” she recounted.

At first, Sanja was incensed to be asked what she thought was a very unprofessional question.

“I was thinking, ‘Who is he to ask me that kind of a question. … Faith is something very personal.”

But as she returned home with more pills in her hand, she found that the question kept haunting her: “Sanja, do you pray?” She could not get it out of her mind.

On the one hand, it was an easy question to answer. Sanja did not pray. She had not prayed since she was a child. She did not even remember how to pray. She no longer believed there was anyone or anything she could pray to.

But on the other hand, there was the doctor’s words, “Sanja, do you pray?” that kept echoing within her. Something inside of her kept begging that she give prayer a chance.

A night finally came when Sanja could no longer ignore the doctor’s words. If she was willing to try solve her problems with pills that she knew were futile, why not try the ‘prayer thing’ and see if it did anything. She realized that she had nothing to lose.

“I simply opened my hands that night towards [the sky]. I didn’t know if anything would happen, but I did it as if I were a kid, a child … I opened my hands and said, ‘Please God, if you do exist … please help me so I can help others.”

There were no lightning bolts, no thunder claps, no raging wind, just a stillness and a peacefulness. Sanja went to bed, wondering if she had just wasted her time. If anything, she hoped that maybe the doctor’s words would stop ringing in her ears.

But something did happen.

“What happened that night only God knows, but next morning I woke up — as I should openly say — a new person. There are no words to explain how I felt. And it’s beyond words, actually,” she said.

That morning of November 18, 2001, will forever be engraved in Sanja’s heart as the day she began to live, as for the first time. She experienced a new surge of life within her. She saw her relationship with her children and her husband in a new light. She no longer felt obligated to conform to the many expectations that she felt society foisting upon her. She felt liberated for the first time. She realized that she had to use her newfound freedom to help others.

“My life … changed. Not only my life, but the lives of my family, my children, people around me, and friends as well,” she said.

Sanja said that by “knowing the Lord, knowing the truth, so many things just fell off my shoulders.”

“The Lord says, ‘Look for my kingdom. Ask for my kingdom, and everything else is going to be given to you. And that’s exactly what I realized that morning. The whole package came to me, in front of me, and I said, ‘OK, what do I do first,’” she added.

Many years later, Sanja would find her faith convictions being put to the test after she and her family moved to Croatia. Her husband became involved in politics and was unexpectedly elected Prime Minister of Croatia, making her the First Lady.

Croatia, which allows abortion up to the 12th week of pregnancy, was gearing up to have its first national March for Life in May 2016. Organizers invited Sanja and her family to attend. But high ranking ministers urged her not to go.

Sanja would not listen to them. Since her conversion in 2001, she had been living her life according to a higher wisdom that superseded political correctness. She knew what God expected of her and it had become her delight to follow his plan for her life.

“And so therefore I did what I felt I was supposed to do as a mother of four children, and I told [everyone just] one sentence,” she said. Asked by a journalist why she, as First Lady, had joined in the march, Sanja famously replied: “Every prudent person chooses life over death.”

Sanja said her decision to march was not about condemning women who have had abortions but to show women that there is another way.

“I empathize with those mothers who are deciding to go through  this difficult time of abortion. And they usually go, not because they want to kill the baby, but because they are fearful. They don’t have support,” she said.

“I do empathize with them, but then, at the same time, I cannot say that abortion is right. We have to speak up and say clearly no it’s not OK. But, let’s help those women. Let’s open up shelters. … There are many many possibilities we can do for those who are in need,” she added.

Even though Sanja received some negative coverage for attending the march, she said she has “no remorse.”

“I have no judgment in my heart towards those who said not very nice things about the march, because it’s obvious we [have to] do battle in this life for good, and we have to continue doing that, no matter what. We are apostles of this time, and we have to say ‘Yes,’” she said.

Sanja said that if there is one message women need to hear today, it’s that they must discover anew the purpose for their existence.

“Women, mothers, are going through a lot of struggle. They are fighting for something. Why? Because they’ve lost the root of their purpose, which is first and foremost to be a mother, a mother who gives birth, a mother who waits for her husband when he comes home, a mother who talks 24 hours in prayer.”

“Being a woman today is extremely challenging, and without Jesus Christ it’s impossible.”

Sanja believes that only a real relationship with Jesus can help women to be the persons God created them to be.

“Being a woman today is extremely challenging, and without Jesus Christ it’s impossible. And some would say, ‘What do you mean, it’s impossible? Of course, it’s possible, everything is possible.’ But then why is there so much sickness? Why is there so much sadness? Why do women cry when they go to bed? Why? Because there is no hope. There is no light. These we can only get through Jesus Christ,” she said.

Sanja said she can only say such things with conviction because she herself has been that woman who cried when going to bed, who was sick of life, and who had no hope for the future.

Sanja said that once a woman has Jesus in her life, then everything else — relationships with husband, children, and others — falls into the right place. She believes that women only need ask God for help, and he will not fail them.

“We are all called to surrender to the Lord. … We are here to meet the Lord Jesus Christ, and [once we do] everything else is going to fall into the right place where its supposed to be,” she said.