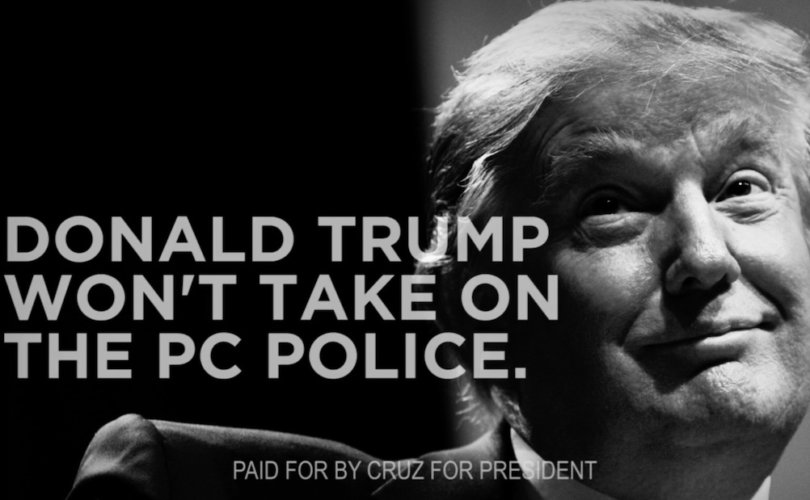 “Should a grown man pretending to be a woman be allowed to use the women’s restroom?” the ominous ad asked.  “The same restroom used by your daughter?  Your wife?”

The ad then played audio of Trump saying, “People go, they use the bathroom that they feel is appropriate.”

“It’s not appropriate.  It’s not safe,” the Cruz ad continued.  “It’s PC nonsense that is destroying America.  Donald Trump won’t take on the PC police.  He’s one of them.”

Cruz also criticized Trump in a statement yesterday. “Donald Trump isn’t going to defeat political correctness; today he bowed down to it,” the Texas senator said.

Donald Trump is no different from politically correct leftist elites. Today, he joined them in calling for grown men to be allowed to use little girls’ public restrooms. As the dad of young daughters, I dread what this will mean for our daughters – and for our sisters and our wives. It is a reckless policy that will endanger our loved ones.

Yet Donald stands up for this irresponsible policy while at the same time caving in on defending individual freedoms and religious liberty. He has succumbed to the Left’s agenda, which is to force Americans to leave God out of public life while paying lip service to false tolerance.

This is not real tolerance. The Left wants to force its belief system onto Americans across the country and silence people of faith in the public square. Unsurprisingly, Donald Trump is all too eager to join them. This simply confirms that the same man who favored partial-birth abortion and still supports public funding for Planned Parenthood will sacrifice principle on the altar of political correctness. Trump will not defeat political correctness. Today he bowed to it.