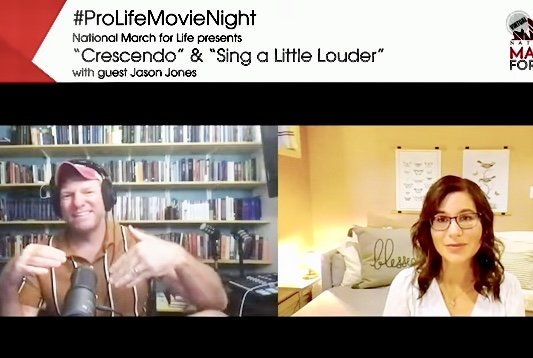 OTTAWA, May 12, 2020 (LifeSiteNews) – More than a thousand Canadians tuned in to view two “impactful” pro-life films and hear from one of the movie’s producers during day two of Campaign Life Coalition’s 23rd annual Canadian March for Life. The event is taking place virtually this year because of the coronavirus.

The movie night (click here to watch) featured the live streaming of two pro-life films, “Crescendo” and “Sing a Little Louder.” It included a conversation with pro-life activist and film producer Jason Jones and CLC’s Global Policy and Advocacy adviser Mattea Merta. Jones is the founder and president of Movie to Movement.

Debbie Duval, the national capital organizer for CLC, told LifeSiteNews that day two of the virtual March for Life went well, and the conversation with Jones and Merta was enlightening.

“The second day of the virtual National March for Life went on without a hitch,” said Duval. On the first night, the website crashed due to overwhelming traffic.

“The conversation with Jason Jones and Mattea Merta was really interesting discussing all aspects of the most vulnerable groups in our society. The films Crescendo and Sing a Little Louder were short but very impactful.”

In his conversation with Merta, Jones said the award-winning film “Crescendo” is a story “to promote the beauty of the human person.” He also told Merta that “Crescendo” is a work of art that celebrates the dignity of the child in the womb and the mother.

The second film of the evening was the short picture “Sing a Little Louder.” It is a movie inspired by the true story of a man who in his youth witnessed the horrors of the Jewish Holocaust from the pews of his Church.

Duval told LifeSiteNews that she had one pro-life viewer comment to her that the film left him speechless.

“One viewer said he was speechless and had not realized the similarities between the Jews and the current dehumanizing of the preborn children whilst we are all singing louder by watching TV and many other entertainment escapes,” said Duval.

“The comment was just from a viewer that spoke directly to me. They are pro-life but shocked and really made the correlation between the Christians singing louder to avoid taking action and our current society, with all our escape measures to avoid dealing with it including being afraid to stand up and be persecuted.”

Today’s pro-life movie night will feature the film Fatal Flaws: Legalizing Assisted Death. It can be viewed at marchforlife.ca and CLC’s YouTube channel starting at 8 p.m. EST. It will be followed by a conversation with Alex Schadenberg, who is the executive director of the Euthanasia Prevention Coalition.

CLC decided in April to hold this year’s March for Life virtually, as the coronavirus health restrictions on public gatherings made it impossible to conduct the event as usual in Ottawa.

CLC is the largest leading national pro-life and pro-family political lobbying group in Canada. The CLC virtual Canadian March for Life started Sunday and will continue until May 15. This year’s theme is “Be not afraid Canada!”

Despite being in a virtual format, the 2020 March for Life will replicate some of the March’s usual mainstays, such as the candlelight vigil, Masses, and a rally.

For Sunday’s kickoff, more than 3,000 tuned in to view a free screening of global pro-life advocate Obianuju Ekeocha’s documentary Strings Attached. Sunday’s event saw such a high demand that for a brief time the site, marchforlife.ca, crashed.

CLC noted that although the free screening is no longer available, the film can be viewed for a small fee at stringsattachedfilm.com.

The “virtual” march will take place on Thursday, May 14. This day is chosen for the March as it is the same day 51 years ago in 1969 when abortion was legalized in Canada. This was the day when then-Prime Minister Pierre Trudeau (Justin Trudeau’s father) passed a heavily criticized Omnibus Bill that amended the Criminal Code to allow abortions to be done in hospitals.

The court encouraged the Canadian Parliament to come up with replacement abortion legislation. This effort failed when then-Prime Minister Brian Mulroney’s draft law failed in a Senate tie vote. Canada has since had no abortion law at all, and thus abortion is permitted up through all nine months of pregnancy.

On Wednesday, the pro-life Mass in memory of Fr. Alphonse de Valk, C.S.B will take place starting at 6 p.m. EST, followed by the virtual Candlelight Vigil for victims of abortion at 8 p.m. EST.

For Thursday, the day's online program begins with the National Mass for Life from Ottawa’s Notre-Dame Cathedral starting at noon EST. It will be celebrated by Archbishop Terrence Prendergast.

The Mass will be followed by a “Be Not Afraid” pro-life special hosted by EWTN’s Doug Keck. The virtual march will then take place from 2:30 to 4:40 p.m. EST, which will include a “great lineup of pro-life, religious, and political leaders,” according to the March for Life website.

The Virtual March for Life will end Friday, May 15, with a pro-life webinar organized by CLC’s Youth and Niagara Region Right to Life.

Before the evening ends, there will be a free one-time screening of the film “Because of Grácia,” which will include an interview with the film’s director, Tom Simes.

May 14, 2020 update: Proper attribution has now been given to two quotes.