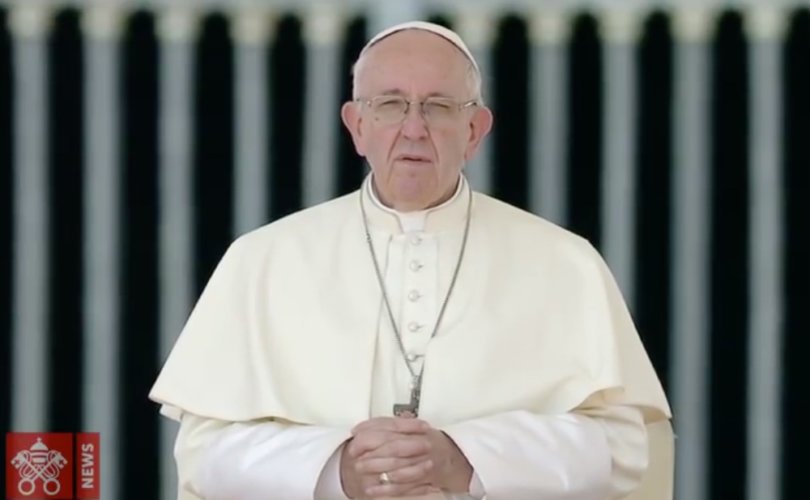 VATICAN CITY, August 29, 2018 (LifeSiteNews) – A group of the faithful were chanting what some say is the name “Viganò” at the end of today’s general audience with Pope Francis in St. Peter’s Square. Some, however, are saying the crowd was only chanting the name of a bishop on stage with the Pope.

The chant came at the end of the audience, after the customary praying of the Our Father and bestowal of the apostolic blessing. Listen to the chant in the video below.

Pope Francis dedicated today’s general audience Catechesis to his recent visit to Ireland for the World Meeting of Families.

On his return from Ireland to Rome on Sunday, during the inflight press conference aboard the papal plane, Pope Francis said he’s “not going to say a word” regarding Archbishop Carlo Maria Viganò’s explosive 11-page testimony implicating him and several senior prelates in covering up Archbishop Theodore McCarrick’s alleged sexual abuse of seminarians and priests.

Archbishop Carlo Maria Viganò, who served as apostolic nuncio in Washington D.C. from 2011-2016, principally charged that between 2009 and 2010, Pope Benedict imposed canonical sanctions on Archbishop McCarrick, removing him from public ministry and forbidding him from traveling. Viganò says that he personally informed Pope Francis about the problems with McCarrick. Vigano further attests that he personally informed the Pope of McCarrick’s misdeeds, but that the Pope ignored this and lifted the sanctions.

The Spanish agency, Infovaticana, first reported the chanting this morning. The news soon flew around Twitter as well.

But CNS reporter Cindy Wooden suggested that the chanters were saying the name of their bishop.

Sorry @matthewschmitz but it seems more likely to be the confirmation kids from Lucca, calling their bishop “Italo” (Castellani) who is up on the stage with the pope. “EE-ta-lo EE-ta-lo” https://t.co/64FUoFqeQL

CNA reporter Hannah Brockhaus then claimed on Twitter that the group of young people from Lucca were, indeed, tweeting ‘Italo’:

Just spoke to Don Gilberto, who is leading the pilgrimage, and he confirmed the youngsters were shouting “Italo.” https://t.co/K33GY7KaX0

But another source close to the Vatican, after listening carefully, told LifeSiteNews that what began as ‘Italo’ was soon joined by ‘Viganò’: “It is definitely ‘Italo’ at the beginning, but the three last calls are ‘Viganò’,” he said.

This leads to the hypothesis that the group of young people began chanting ‘Italo’ but other people in the crowd thought they heard ‘Viganò’ and joined in the chant with the whistleblower's name.