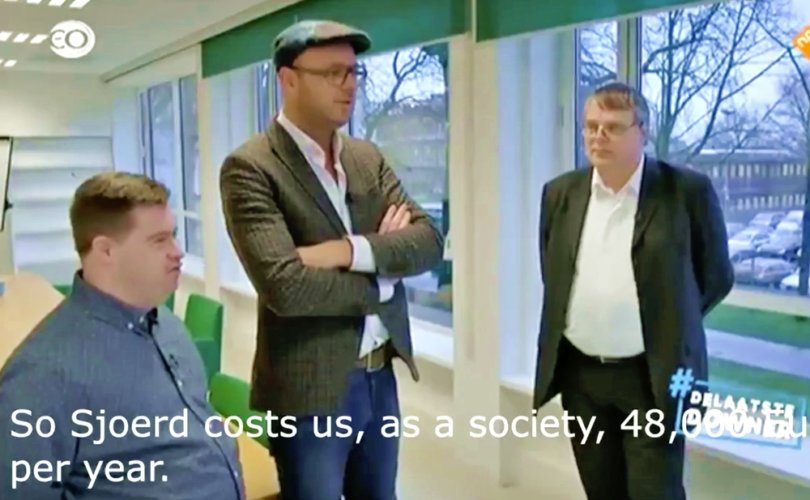 AMSTERDAM, Netherlands, December 18, 2017 (LifeSiteNews) – A pro-life leader is calling out a Dutch research organization for putting a price tag on the lives of people with Down syndrome.

African pro-life leader Obianuju Ekeocha occasioned upon a clip of a Dutch video in which a man with the chromosomal abnormality of Down Syndrome is told exactly how much his life is a financial burden that is draining health care dollars.

The video clip was part of a TV series named “The Last Downer” which aired in March last year. The series appears to have been produced by a Christian group who wanted to provoke a debate about the value of people with Down Syndrome. In one episode, the Dutch National Institute for Public Health and the Environment (RIVM), a research institute whose findings help form government policy, was asked to calculate the cost of such people to society. The clip highlights the researcher showing his calculations.

In the video clip, a narrator begins, “The Dutch National Institute for Public Health and the Environment (DNIPHE) has…calculated what the costs are to care for a Downer.”

Lany Slobbe of the DNIPHE asks Down-afflicted Sjoerd on camera if he wants to know what it costs the nation to care for someone with Down Syndrome.

“Yes, for sure I want to know,” the Down-afflicted man said.

The researcher, who had written a series of huge numbers on the board, answers, “48,000 Euro per year approximately.”

The narrator then asks how the cost compares to “normal persons.”

The narrator continues his inquiry, asking if “Downers” are the most expensive human burdens on society.

The researcher stated that the cost of “Downers” is “very comparable to people who stay in nursing homes (and) elderly patients with dementia” who require institutionalization and “24-hour care 7 days a week.”

“That is more expensive than just getting a pill at the doctor to become well,” he said.

“Watching this broke my heart,” Ekeocha tweeted.  “This dear man who has Down syndrome is told exactly how much he is costing society and how ‘expensive’ he is.”

“Why has the Dutch National Institute for Public Health put a price tag to human life?” Ekeocha asked.

Watching this broke my heart��.

This dear man who has DownSyndrome is told exactly how much he is costing society & how “expensive” he is☹️.

Why has the Dutch National Institute for Public Health (@RIVM) put a price tag to human life? Why?pic.twitter.com/RBIn6IpbKN

Putting a price tag on people with genetic abnormalities so that they feel like burdens that society is better without is not new. Civilized people around the world were confounded as to how the average German could have tolerated or ignored the Nazi Holocaust decades ago. But the “Ultimate Solution” started with the idea that there is such a thing as a human “life not worthy to be lived.”

Germans were propagandized in movies, newspapers, and public posters. High School math tests included “problems” on the cost of caring for and rehabilitating the sick and crippled. For example, one problem asked how many new housing units could be built and how many marriage allowance loans could be given for the amount of money it cost the state to care for “the crippled, the criminal, and the insane.”

People reacted to Ekeocha’s tweet of the video clip with outrage.

Princeton professor Robert P. George suggested that the video clip of a research institute pricing out a human being smacks of everything the Dutch fought against in World War II.

My God! People! People!!! Do you not see where this goes??? Do the Dutch, who suffered under–and in many cases heroically resisted–Hitler's domination, forget that the “final solution” began with the dehumanization and eugenic killing of the handicapped? https://t.co/2blq0OXGzL

Others were equally outraged by the Dutch research institute putting a price tag on a human being.

“This is gross Darwinism at its root,” Jeff Jackson Jr.‏ wrote in response to Ekeocha's tweet. “We’re only worth it if we’re not expensive to society because of disability or age.”

“As someone with autism, this makes me furious and scared,” Jackson added, along with his assumption that the Dutch National Institute for Public Health (DNIPH) “also advocates for assisted suicide.”