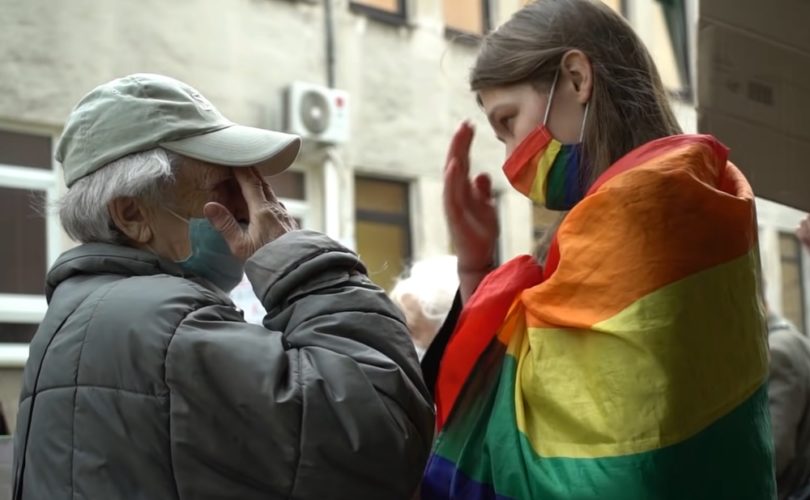 POLAND, May 13, 2021 (LifeSiteNews) – A video out of Poland making the rounds on social media captures the powerful moment when an elderly Catholic woman in tears kneels down on the ground to kiss the feet of a young female LGBT activist who has come out to mock and disrupt the woman’s group which is praying. The elderly woman begins a dialogue with the LGBT activist which stunningly ends in the activist imitating the woman in making the sign of the Cross.

The elderly woman was part of a group praying the Chaplet of Divine Mercy on April 29 outside a courthouse in Warsaw as Catholic station Radio Maria was inside defending itself against the latest attack from leftists, who were attempting to silence the conservative outlet.

Video captures the group praying while holding signs in support of Radio Maria. Suddenly, a young woman wrapped in a rainbow “gay pride” flag and wearing a rainbow-colored mask enters the scene. She dances to music playing on a hand-held device while smoking a cigarette. She attempts to shout down the group with slogans, cursing and swearing at them.

As the young activist continues her ranting, the elderly woman approaches her, kneels down on the sidewalk, and kisses her feet.

Video captures the dialogue that ensues between the elderly woman and the LGBT activist. The LGBT activist, apparently moved by the woman’s gesture, tells the woman to go on “calmly” with her words, asking her “please don't cry.”

The elderly woman explains how sad she is to see where her country is going after fighting for it her whole life.

“I am 83 years old and I love you. I fought for Poland my whole life. Soon I will leave this world and Poland is divided. I am very sorry for that and I feel it very much,” the elderly woman said in tears.

“And these children, our poor children, who were raised by Polish Poles,” she adds in reference to the young woman.

The two hug one another at one point.

The Remnant’s Michael Matt called this moment of the woman and the LGBT activist making the sign of the Cross together a “beautiful little sign of hope.”

Matt said that as the world struggles under the weight of the fallout from the Coronavirus with the loss of freedoms, the trampling of rights, the closure of churches, the plans for a great reset, the Cross of Christ has the power to save and will always be there, no matter what may come.

May 14, 2021 correction: The original report stated the group was praying the rosary whereas they were praying the Chaplet of Divine Mercy. This has now been corrected.