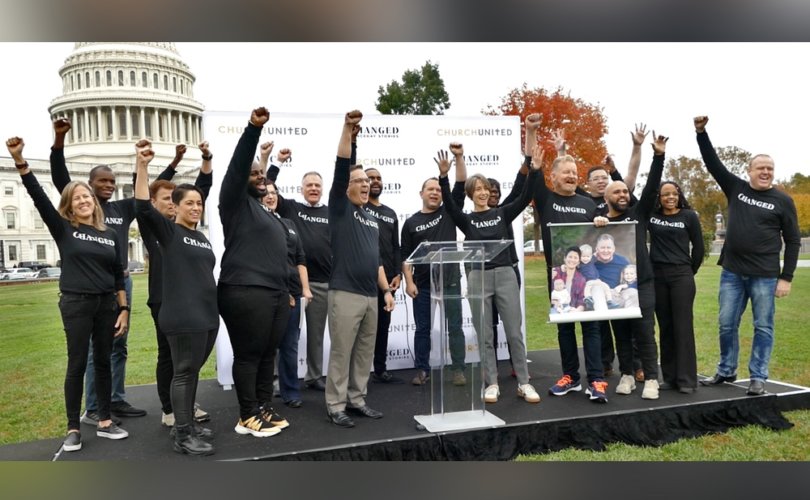 WASHINGTON, D.C., November 1, 2019, (LifeSiteNews) — Former gays, lesbians, and transgender men and women descended on the nation’s capital this week to urge members of Congress not to support the so-called “Equality Act” and “Therapeutic Fraud Prevention Act” that would prevent others from seeking help to escape LGBT lives.

Laws are being proposed in Washington and in state and local jurisdictions around the country that would hinder those struggling with unwanted same-sex attraction or gender dysphoria —conditions that are often triggered by childhood trauma such as sexual or emotional abuse, depression, or family dysfunction— from getting the professional or pastoral help they desperately need and want.

At the same time, such legislation implies that those who have left LGBT lifestyles are nothing more than frauds.

“We are being targeted by city, state and the federal governments here in the United States,” said Jim Domen, a former homosexual, now a married father of three.  Domen is a pastor and founder of Church United, a burgeoning coalition of California churches seeking to shape the moral culture of the state.

“America needs to hear that there’s diversity of experience for LGBTQ, and that should impact how our congress legislates,” said Elizabeth Woning, cofounder of Changed, a growing movement of former gay, lesbian, and transgender men and women. She has been married to her husband for 14 years and no longer experiences same-sex attraction.

“We have chosen a different route for our lives,” continued Elizabeth, “and in following that path, either through professional counseling or faith-based discipleship, we’ve attained levels of wholeness and fulfillment that most assume is impossible.”

“Many people, upon hearing our testimonies of fulfillment are seeking what we have,” she added.

All sixteen individuals who took to the stage in front of the U.S. Capitol building testified not only to the power of God to change their lives, but to the importance of having access to counseling from psychologists, psychiatrists, and ministers whose services might someday be outlawed across the land.

Here are several short video testimonies by this remarkable group of individuals —about three minutes each— telling their stories in the hope of averting the creation of tyrannical new laws that would harm many.

Kevin Whitt:  A former transexual, drag queen, and prostitute who estimates he had sexual encounters with 5,000 men.

“I lived a life of much gender confusion and much abuse — verbally, physically, and sexually — by my father,” he explained.

God changed Kevin’s life six years ago on Easter Sunday.  “I knew there had to be another way.”

In fact, “most of us wonder what conversion therapy is, because we do not know,” he declared.  “If God can change me, he can change anybody.”

“Yes, I am known as a Pulse survivor, but I really want to be known as living proof that God does transform lives,” said Angel.

“Change is possible,” he declared, “and we should have the right to share our stories.”

KathyGrace Duncan:  Former “Transman,” who began falsely believing she should have been born a male even before she started attending kindergarten.

Watching her father’s abusive treatment of her mom, she concluded that she didn’t want to grow up and be a woman and decided to become a man and “rescue women.”

A little later, for a period of two years, KathyGrace was molested by a family member, confirming her belief that women are weak, vulnerable, and hated, steeling her resolve to become a man.

Twenty-six years ago, after living convincingly as a man for several years, KathyGrace began living according to her biological sex.  “I am changed. I’m free.  I no longer struggle with attraction to women.  I am grateful to my heavenly Father, and my Lord and Savior, Jesus Christ.”

April Lockhart:  Former lesbian.  “I had fully believed in this lie that gets perpetuated:  That people don’t change, they can’t change, and if you try to change them it’s detrimental to their health,” she said.  “That’s a lie.”

Unfurling poster-size pictures of her wedding day, her husband, and children, April explained that she would have missed out on the greatest joys of her life had she not found out that change is possible.

“People can and do change if they want to,” said April, “and we need to be allowed as free Americans to seek that out.”

“Nobody has the right to tell you can’t be what you want to be,” she added.

“My father who is a pastor raped me,” recounted 24-year-old Christopher, “and I was tortured by my mother” simply for being a male because she had been hurt by men.

“Any sign of masculinity was a trigger and a threat to her,” he said.  “I can remember her beating me with a wire hanger until I was bloody and putting alcohol all over my body as I stood in front of a mirror.”

“I learned at that moment that I could not be masculine.  I had to be effeminate,” he continued.  “I had to emulate my sisters to avoid triggering her so I could survive.”

At age 18, he went to a church where he “saw in people’s eyes a God that my parents did not tell me about,” and he wanted the freedom and the life they displayed.

“I want to say change is possible, and people like me do exist,” he noted.

“Not only can Jesus change one’s orientation,” added Christopher, “He can also heal you of trauma.”

Greg Quinlan:  Former homosexual, who was the object of his father’s rage when he was a child.

“I was eight years old, and my dad was working on a car in the driveway.  He was about to explode and I knew I was going to be the target of his venom.”

At age ten, “Hugh Heffner was my first molester,” said Greg, because he was introduced to Playboy pornography, and he soon became sexually active with neighborhood boys.

Years later, after Greg’s dad finally told him, “I love you,” while on his deathbed, Greg forgave him. “That’s when the same-sex attraction started to wane.”

“There are so many people trapped in homosexuality that want out, said Greg.  “And standing right here on this stage, is proof that homosexuality doesn’t have to last a lifetime.”

“Ex-gays, formers, ex-trans” all “prove that change is possible,” he added.

“Having been sexually abused at a very young age,” said Jason, “it caused me to have a very distorted view on love, relationships, and sexuality.”

Although as an adult Jason found some measure of happiness in an 11-year homosexual partnership, God touched his life, and he was instantly delivered from his same-sex attraction.

“I now stand before you as the proud father of three beautiful children and the proud husband of a loving wife,” he said.

“Governors think that they know better than I do how I should identify sexually,” observed Ken.

“Apparently, we’re inappropriate,” said Ken, referring to the groups of former LGBTQ individuals standing on the stage with him.  “It’s OK for everyone else to choose their sexual identity, but not us.”

Turning his attention to members of congress, Ken said, “With all due respect, what gives you the right to decide what I would like to pursue with my sexuality?  Why in the world would you or someone with a gavel decide what therapy I should or should not be able to get?”

“You can decide whatever you want, but make no mistake:  Nobody is going to make my decisions for me,” declared Ken, “and we’re not going away.”

“God is on the throne, He changes people’s lives,” he proclaimed, “and America, you would be well advised to hold on to your liberties.”