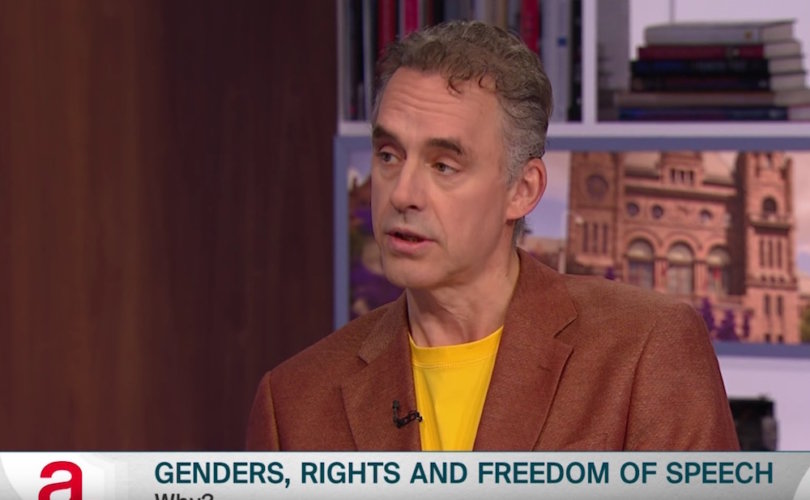 TORONTO, October 28, 2016 (LifeSiteNews) – Jordan Peterson, the University of Toronto champion of free speech, told a TV panel of critics that he would never use politically-correct gender pronouns like zir and xe even under threat of fines, jail, and job loss.

Three weeks ago Peterson raised an international storm by putting out three Youtube videos condemning the Canadian government, the Ontario Human Rights Commission (OHRC), and his own university for what he sees as their effort to compel the use of transgender pronouns for students and staff who identify themselves as other than male or female.

Peterson indicated the likeliest threat to be the OHRC, which already has regulations threatening both individuals and their employers with fines and gag orders if they don’t use the pronouns preferred by individuals claiming to be “other-gendered.”

Ask by TVO host Steve Paikin if he is willing to suffer the inevitable consquences for his stand, Peterson was resolute.

“I think that the OHRC is obligated by their own tangled web to bring me in front of it. If they fine me, I won’t pay it,” he told the panel. “If they put me in jail I’ll go on a hunger strike. I’m not doing this and that’s that. I’m not using the words that other people require me to use, especially if they’re made up by radical left-wing ideologues.”

A moment later he said he was prepared to soften his position if the dozens of alternative pronouns now being proposed were boiled down to a handful and if he were never required to give up the distinction between singular and plural pronouns. Some transgenders, including one of the panellists, transitioning female-to-male writer Mary Rogan, prefer to be referred to as “they” because it is gender-neutral.

Watch the clip of Peterson on TVO:

Rogan dismissed as a “tempest in a teapot” what she described as Peterson’s belief that transgender pronouns were part of a “transsexual cabal” to overthrow Western civilization.

Peterson corrected her: “It’s not a transsexual cabal. It’s a cabal of radical left wingers.”

Peterson’s overarching view expressed in his videos is that the political Left’s strategy in democratic societies is to ally themselves with those who are unsuccessful and to blame their situation on oppression by those who are more successful. Peterson calls this “the PC Game” and describes it as an attempt “to subject all values to the single value of equality of outcomes.”

In the panel discussion he called the ideological Left “resentful and uninformed.” He said they didn’t love the poor so much as “they just hated the rich: the ‘resentful’ part is their willingness to pull down any structure that’s hierarchical because of resentment about not being on the top [themselves]. And ‘uniformed’ is about the attempt to force every political issue into the domain encompassed and viewed through this single lens.”

While Peterson denied ever saying that transgendered people don’t exist, he did state what was heresy to some in the panel, that “gender identity and biological sex don’t vary independently.” Another panellist, Transgender Studies professor Nicholas Matte, flatly denied the existence of biological sex and said Peterson was guilty of “hate speech,” “abuse,” and “violence” against transgender students by refusing to use the pronouns they wanted.

But Peterson rebutted claims he was a “transphobe” by insisting, “I can tell you I’ve received more letters from transsexual people supporting me than opposing me.”

Ironically, his only ally on the panel was male-to-female transgender Theryn Meyer, a Vancouver university student and blogger who participated from a Vancouver TV studio. Meyer condemned the “political hegemony surrounding trans politics” and insisted that “there are two genders biologically,” though many people are not all one and none of the other. Though he would prefer to be referred to as female, he admitted, “ultimately its up to him what pronouns he uses.”

Prompted by the moderator, Peterson then said he would refer to Meyer, who looks and sounds like a woman, as “she.”

While Peterson’s willingness to go to jail was dismissed at one point as false bravado since the OHRC did not possess the power to jail people, Peterson replied, “What if I don’t pay the fine?” Nobody could answer him.

He also noted that the University of Toronto had told him to stop talking about gender because it faced fines and orders from the Ontario Human Rights Code if he did not. “If the hate crime accusation stuck, I could be fired,” he said, regardless of his tenure.

One of Peterson’s targets has been Bill C-16, still being debated in the House of Commons, which would add “trans people” to those protected against hate crime already in the Criminal Code.

Panelist Kyle Kirkup, a human rights specialist at the University of Ottawa, tried to allay concerns over Bill C-16, arguing it only penalized those promoting genocide against transgenders, and of those committing other crimes against them, such as assault, because they are transgender.

Peterson tried to make clear that transgenderism was not the issue for him. It was the idea of forcing him and all Canadians by law to use certain words against their will. Peterson sees words as essential tools to debate and discover truth without violence.