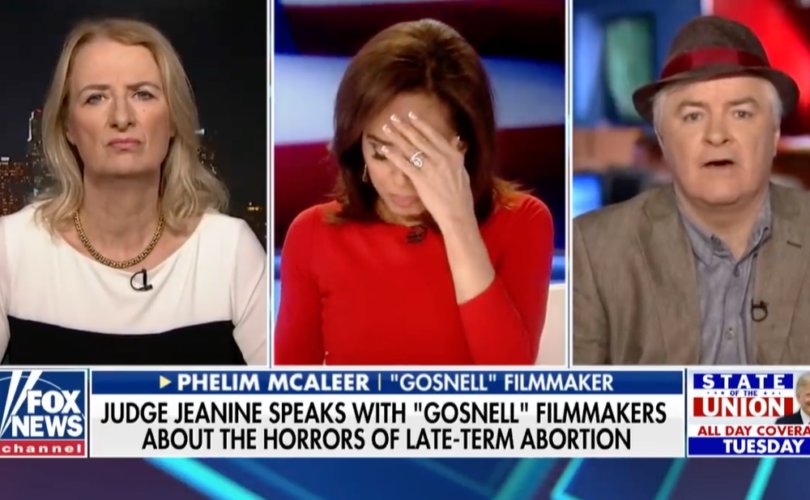 NEW YORK, February 4, 2019 (LifeSiteNews) – Fox News host Judge Jeanine Pirro reacted with disgust when one of the creators of the hugely successful movie Gosnell told her during an interview how lucrative it is to sell body parts from aborted babies.

When asked about what happens to the bodies of abortion victims, the film's co-producer Phelim McAleer told a visibly disturbed Pirro that, “aborted babies bodies are a very valuable commodity in today’s America. Research institutions, elite universities, medical centers pay a lot of money for baby parts.”

“I find myself in complete shock saying that on television in America in 2019 but you can buy the arms and legs and skin of babies today. It’s shocking,” he said.

As McAleer was saying this, Pirro was shaking her head, as if in disbelief. She then exhaled, dropped her head in disgust, and blocked her eyes with her hand.

McAleer along with co-producer Ann McElhinney appeared on Pirro’s February 2nd show to react to the pro-infanticide comments made by Democratic Virginia Governor Ralph Northam last week and to discuss their film and the impact it has had.

“The whole reason that we decided to make this movie…was because the testimony that was heard in the court when Gosnell was on trial. And that testimony, described, you know, ‘comfort care’ — if a baby was born alive in a botched abortion you just let it die, eventually it will pass,” McElhinney said.

Northam said in January 30th comments defending a proposed abortion bill that doctors could refuse to resuscitate an infant born alive that “would be kept comfortable” after a failed abortion if that's what the mother wanted.

McElhinney argued that Americans know little about the crimes of Kermit Gosnell but that the testimony given during his trial “must be heard.” The “incredible reaction” to the remarks of Governor Northam and Virginia Delegate Kathy Tran shows people are finally learning about the reality of abortion laws in the United States, she added.

Gosnell depicts the 2013 arrest, trial, and conviction of Philadelphia abortionist Kermit Gosnell for the first-degree murder of three born-alive babies and the involuntary manslaughter of patient Karnamaya Mongar. Gosnell is currently serving three life sentences in jail. The film is based on courtroom transcripts, interviews with Gosnell himself, and the 280-page grand jury report.

Despite every major Hollywood agency turning the film down, crowdfunding helped raise more than $2.3 million in 45 days from almost 30,000 donors. When released, hundreds of movie theaters across the United States refused to show the movie. Still, Gosnell earned a box office of more than $3.6 million as of December 17, 2018. The movie’s DVD, set to be released Tuesday, February 5th, can be preordered on Amazon for $9.99 by clicking here.

The trio discussed the reasons why Gosnell was made and the positive effect it has had on viewers, with McElhinney sharing a story about how Americans across the country who used to be pro-abortion saw the movie but are now fighting against abortion.

“I think the next election could be the abortion election,” McElhinney said. “We’ll have Donald Trump on one side defending the most defenseless and we have the Democrats who want abortion up to nine months.”

The interview concluded with McAleer thanking Governor Northam, who he referred to as “Governor Gosnell,” for speaking “loudly and clearly” on what really goes on in states across the country where babies are left to die after a failed abortion. To which Pirro responded, “I actually call him Governor Mengele,” a reference to a 1930s Nazi physician who conducted human experiments on prisoners during World War II.