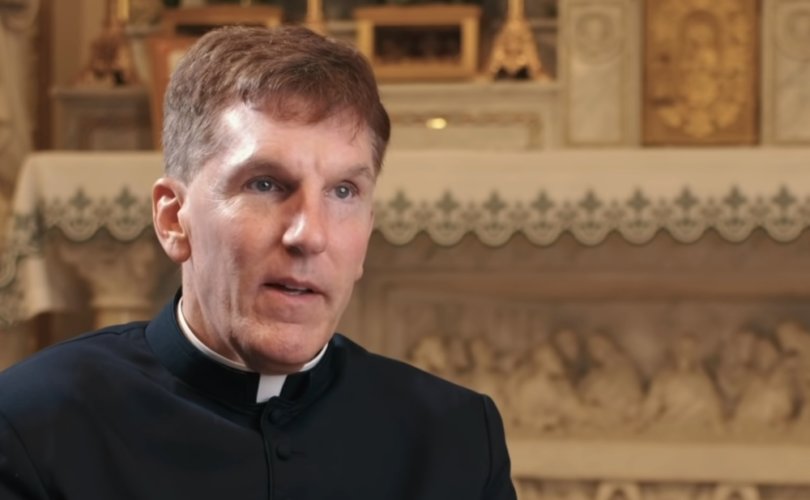 LA CROSSE, Wisconsin, April 28, 2021 (LifeSiteNews) — The priest who last fall rocked the U.S. Catholic Church when he warned, “You cannot be Catholic and Democrat,” is again making headlines for speaking plainly and truthfully about the COVID-19 vaccines, and for calling out the apostasy of Catholic bishops. In an exclusive interview with LifeSiteNews, Fr. James Altman discussed the media-manufactured controversy and rebuked bishops who have cowardly mishandled the Church’s pandemic response from the start.

Altman, a priest of the Diocese of La Crosse, Wisconsin, is being targeted by local and national media for cautioning parishioners that the COVID-19 injection technically “is NOT a vaccine,” but rather “an experimental use of a genetic altering substance that modifies your body — your Temple of the Holy Spirit.”

He is also being criticized for what some detractors deem to be his disregard for COVID-19 gathering and masking restrictions during parish Masses, while also frequently administering the Sacrament of Holy Communion on the tongue, not the hand.

The Associated Press (AP), Newsweek, and others picked up on the story after a local paper, La Crosse Tribune, accused Fr. Altman of “flouting COVID protocols” and sharing “vaccine misinformation.”

Fr. Altman sat down with LifeSite’s Jim Hale to discuss the media-manufactured controversy and to rebuke bishops who have cowardly mishandled the Church’s pandemic response from the start.

“This is how stupid the left wing is,” said Fr. Altman. “They think they’re attacking me, but what they have done is they have created international news, spreading the truth that I have been speaking. I could never have done [this] on my own.”

Altman explained that his simple goal is to lead his parishioners to remain faithful in the face of what’s going on in the world, noting that in countries like Ireland and Canada, those resisting mandates while striving to live their faith are being arrested.

“It’s coming here if we don’t stand up to it,” said Altman. “Shepherds of the Church, bishops of the Church: You better get united, you better start standing up for the faithful. That’s your job.”

“Back when this whole thing started, the bishops of the Church lost a great opportunity to finally stand up and be relevant again,” noted Altman. The U.S. bishops could’ve “shown an abundance of courage, instead of an abundance of cowardice.”

“Why should people believe in the real-presence [of Christ in the Eucharist] when the shepherds of the Church in this country and around the world have said it doesn’t matter if you receive or not?” wondered Altman.

“There’s an absolute lack of faith,” he declared. “This is the bad fruit that has come from the bad trees over the last thirty years, really since Vatican II when they destroyed our churches, when they eviscerated our sacred liturgy, [and when] they made it a turning toward man instead of toward God.”

Fr. Altman criticized President Joe Biden for telling Americans that it is their patriotic duty to take the COVID-19 injection.

“No, Joe Biden, it’s my patriotic duty NOT to get your little science experiment inside my body,” emphasized Altman. “What a buffoon!”

In this context, he addressed the bishops, saying, “How dare you, shepherds of the Church, encourage people to use the Temple of the Holy Spirit … in some experiment that we know is gene manipulation? How dare any shepherd of the Church encourage you to take an experiment that manipulates your genes? That is as godless as they come.”

Biden “is no more Catholic than the Dalai Lama,” said Altman, “and shame on any shepherd of the Church who dared to say they would commit sacrilege by giving that guy Holy Communion.”

“How dare you, shepherds of the Church, how dare you say such a thing!” he added.

Altman said that Biden is an apostate, and that the prelates who condone Biden’s reception of the Holy Eucharist are likewise engaged in apostasy: “You don’t give apostates the Blessed Sacrament.”

To the German bishops: “You guys don’t deserve your little red hats”

Fr. Altman then turned his attention to the errant German bishops, who are seeking to mormalize homosexuality and divorce within the Church, and to Pope Francis.

What Fauci, Bishops, are now promoting is damnable to the hottest fires of hell

In his Palm Sunday homily, Fr. Altman had criticized the “godless vermin” who have “fed us fear and instituted godless, Nazi-esque controls on all of us and on those we love.”

“Let us be clear, God damns every single one of those godless moves, whether it be in civil governments, or worse, in the complicity of many in the Church,” he declared.

“In fact, if hell itself has many levels … as Dante was inspired to write, the lowest, hottest levels are the final burning place for those shepherds who were complicit in the godless restrictions,” said Fr. Altman.

COVID restrictions are “destroying our humanity,” asserted the priest. “We are destroying our relationships with other humans made in the image and likeness of God.”

When asked why there aren’t more priests who are willing to speak out boldly and truthfully, he said priests are trained beginning in the seminary to be afraid.

“Once you’re a priest, if you step out of line, they’ll take away your faculties. That’s the big threat — the Sword of Damacles — hanging over everybody’s head,” so truth-speaking priests have to “fly below the radar.”

“Stay close to the Holy Eucharist,” Altman said. “Without that, you do not have life within you. That is what sustains us. And that is why it is so diabolical for any shepherd of the Church to deny people access.”

Every single Catholic has a right to kneel and receive communion on the tongue, and no shepherd of the Church can deny that universal right, the priest emphasized. “Go to the Holy Eucharist, my dear family. That is our only hope in Jesus Our Lord.”