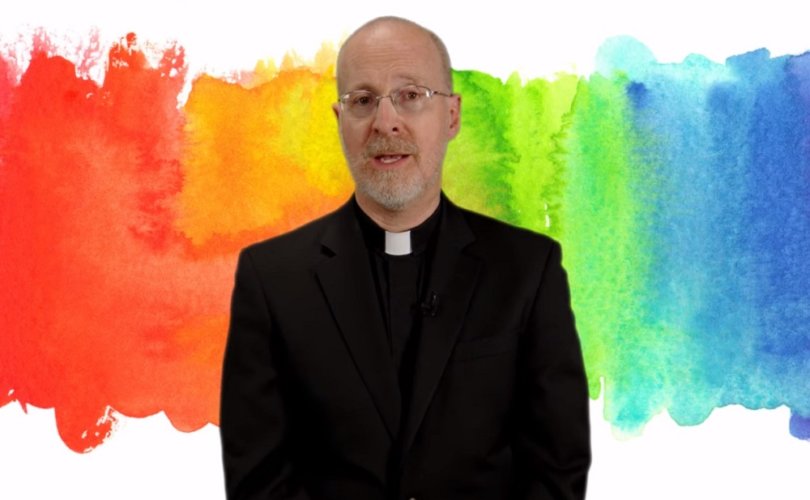 Fr. James Martin's video testimony to a commission of the U.S. government.America - The Jesuit Review / YouTube

Several religious leaders addressed lawmakers on the U.S. Helsinki Commission on Tuesday about how faith communities can address such “hate crimes,” including Martin, editor at large of America magazine and a Vatican consultant.

How churches can combat #racism, sexism and homophobia. https://t.co/ZvxdoUxiOm

Martin, who was given plaudits by Rep. Gwen Moore (D-Wis.) for his work with LGBTQ advocates, said people of faith should first address prejudice and discrimination within their own houses of worship in order to address the phenomenon of “hate crime.”

Joining the committee via video, Martin explained that he was not able to personally attend the hearing because of medical treatments. He spoke on the issue of how religious organizations can respond to “hate crime.” He recalled the murderous 2016 rampage unleashed by a Muslim terrorist at the Pulse nightclub in Miami, which he said had a largely “LGBT clientele.”

Martin said that following the attack, there was an “outpouring of love and support for the LGBT community from almost every quarter in the country.” He claimed, “One notable exception was the Catholic Church, my own church.”

Martin admitted that the U.S. Conference of Catholic Bishops issued a “brief, four-line statement” deploring the attack. He complained that it did not provide specific mention of “gay” and “LGBT” people as the targets of the murders. He said few Catholic bishops issued their own statements about the attack.

“As a thought experiment, imagine if 49 people from a particular ethnic group were massacred, and the name of that ethnic group was omitted from public statements. Moreover, in the wake of the U.S. bishops’ statement, only a handful of individual Catholic bishops expressed any sympathy at all. The vast majority said absolutely nothing. Even in death, the LGBT community remained invisible to much of the Church,” he said.

“Racism, sexism, and homophobia still exist in many Christian denominations, my own included,” said Martin.

Martin suggested that Christian groups are fostering and blessing homophobia among their parishioners. He also claimed that Catholic bishops outside the U.S. have allegedly supported laws directed at supporting homosexuals.

Martin deplored what he said is an “influential, far-right Catholic website,” which he did not further identify, for deploring so-called gay-straight alliances in schools.

“What does such tacit support for prejudice by Church leaders end up doing?” he asked. The priest answered his own question: “it excuses hate, it fosters hate, it blesses hate, and it unintentionally encourages the violence that this hate leads to.”

LifeSiteNews has published articles in the past that point out that so-called gay-straight alliances put children in contact with LGBTQ ideology, radical and homosexual activists, and sexually oriented literature.

Standing in front of the rainbow colors of the LGBT movement, Martin offered what he said are ways that churches can address hatred directed at specific groups of people.

“First, by taking a clear look at how their organizations speak of, and minister to, members of marginalized groups. Second, by reaching out to these groups, specifically to make them feel welcomed into what are, after all, their churches too. Finally, by taking every opportunity to stand with them publicly, to advocate for them, to fight for them, even at the risk of losing some parishioners,” he said.

According to a press release from the organization, countering “hate crimes” requires bringing together government, law enforcement, and religious communities. Founded in 1976 and officially dubbed the Commission on Security and Cooperation in Europe, the commission’s brief is to foster “human rights, democracy, and economic, environmental, and military cooperation” among its 57 member countries. A press release stated, “Religious actors and interfaith institutions play an important role in promoting safe and inclusive societies and reducing violence, hostility, and discrimination.”

The Catholic Church teaches that homosexual acts are “acts of grave depravity” and “intrinsically disordered.” Such acts are “contrary to the natural law” in that they “close the sexual act to the gift of life,” states the Catechism of the Catholic Church.

The Church moreover teaches that God does not create any man or woman with attraction to the same sex, calling such an inclination “objectively disordered.” As is the case with any other kind of sin, be it murder, theft, or adultery, Christianity holds that followers of Christ must love the sinner while hating the sin. The same is true for those who commit homosexual sins. The Church teaches that people who struggle with same-sex attraction must be “accepted with respect, compassion, and sensitivity.”

Martin has been roundly criticized by various prominent Catholics and others for his incoherence with regard to Catholic teachings about sexuality. In June, he said at a Mass to kick off New York City’s huge LGBTQ “Pride” march that Pope Francis has appointed numerous pro-LGBTQ bishops and cardinals.