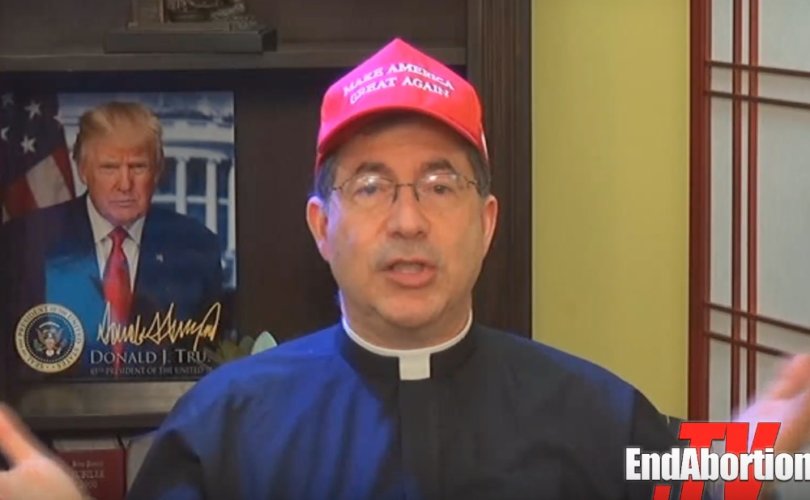 January 25, 2019 (LifeSiteNews) – With initial claims that the Covington Catholic High School Students harassed a Native American veteran at the March for Life quickly debunked, some critics turned their fire to the fact that several of the students were wearing “Make America Great Again” hats in the first place. In a new video, the national director of Priests for Life offers a ringing defense of pro-lifers wearing President Donald Trump’s iconic red caps.

As regular LifeSiteNews readers know, last weekend social media erupted with complaints that video supposedly showed the kids surrounding and mocking Native American veteran Nathan Phillips. But additional video and firsthand accounts soon revealed Phillips was the one who waded into a crowd that was already there waiting for its bus, and he was the one beating a drum inches from student Nick Sandmann’s face. The kids had been performing school cheers in an attempt to drown out profanity-laced harassment aimed at them by members of the Black Hebrew Israelites fringe group.

As the original narrative began to unravel, many journalists retracted their claims and some figures apologized, but others continued to maintain there was something wrong with Catholic attendees of a pro-life event wearing MAGA hats. A video message from President Trump was played at the pro-life event the students had been attending, and Vice President Pence spoke live from the event’s stage.

“Why were so many students sporting MAGA hats?” pro-gay Fr. James Martin asked in a tweet string that partially walked back, but did not apologize for, his original attack on the kids. “It’s a free country for sure, but they were at the March for Life, a religious event, under the care of their Catholic high school administrators and, one hopes, chaperones, not a political rally.”

“It astonishes me that any students participating in a pro-life activity on behalf of their school and their Catholic faith could be wearing apparel sporting the slogans of a president who denigrates the lives of immigrants, refugees and people from countries that he describes with indecent words and haphazardly endangers with life-threatening policies,” Lexington Bishop John Stowe wrote in an op-ed, ignoring, like Fr. Martin, the fact that the event had a heavy Trump administration presence, as it has had each year since the Republican took office. Stowe also didn’t mention the numerous advances President Trump has made for the pro-life agenda, or the fact that the March for Life is an anti-abortion, not pro-mass immigration, rally.

In a Thursday livestream, Priests for Life’s Fr. Frank Pavone wore his own MAGA hat to demonstrate its compatibility with the pro-life cause.

“I believe that the principles America was founded on are consistent with the Gospel, the unalienable rights bestowed by our Creator of life, liberty, and the pursuit of happiness,” he explained. “I believe furthermore that making America great again is simply another way of saying what we say throughout our history when we talk about preserving liberty, defending life, fighting for freedom.”

“God bless you, Covington students, for coming to the March for Life,” Pavone continued. “God bless those who brought you there, who organized the trip. You were in the right place, as were all the other hundreds of thousands of us in the right place on that day, because we're standing up for the children who cannot speak for themselves.”

He said their hats were evidence that the students had confidence in their convictions, and were perfectly appropriate in light of President Donald Trump’s pro-life record during his first two years in office, as well as the pro-life promises he reiterated in a message to the March.

“Did we not hear the words of the most pro-life president that we have ever had when it comes to this issue of abortion?” Pavone asked. “Did he not stand up and say before our eyes and before our ears and before the whole nation and before the world that he would veto any legislation brought to his desk that weakens the pro-life provisions that our elected officials have worked so hard to put into our laws?”

He asked God to bless anyone who wasn’t afraid to express his or her support for Trump, and advised the students to “keep focused on why it is that all of us came to Washington: there are children being slaughtered.”

Fr. Pavone also directed some comments to those present at the Lincoln Memorial to demonstrate for other causes.

“Do you realize that there's a holocaust going on of little baby boys and girls, and that these students who were there ought to be praised and congratulated for coming to Washington to stand up against that holocaust?” he asked.

“No matter what you're protesting about, raise your voices as loud as you want to raise them, but do not close your eyes or your hearts to the tragedy of abortion that those students were there to protest,” he implored.