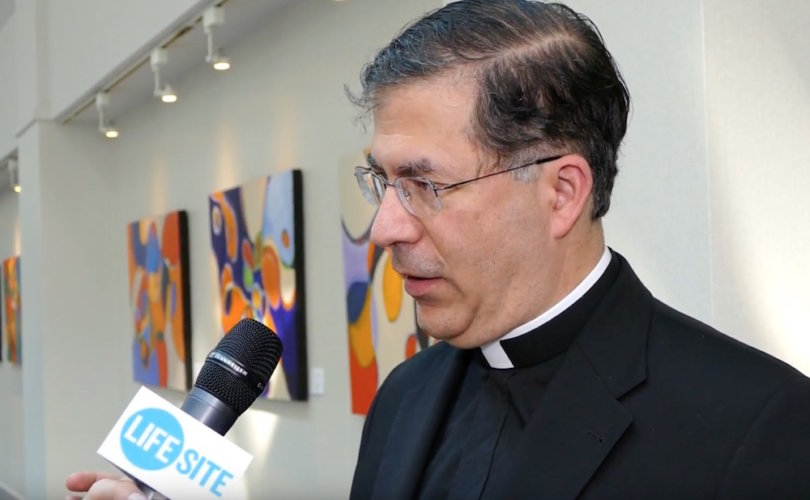 This is Part 2 of a 4-Part series on Catholics and the 2016 election:
Part 1 – Can a Catholic justify voting for a pro-abortion candidate?
Part 3 – Fr. Pavone on why Catholics can’t sit out the election
Part 4 – How churches are ‘more free to speak’ about elections than they think

September 12, 2016 (LifeSiteNews) — The fact that so many Catholics support candidates and parties that are in conflict with the Church’s moral teachings indicates “our politics have become corrupt” and “we don’t have enough solid catechesis right now to counteract this phenomenon,” National Priests for Life Director Father Frank Pavone told LifeSiteNews.

Pavone noted that there is a distinction between self-identified Catholics who don’t practice the faith into which they were baptized and those who regularly attend Mass and strive to follow the Church’s teachings.

This is “where the whole Church’s mission of evangelization and re-evangelization and catechesis comes in,” Pavone said. “The more we lead people back into the flock, the more they end up living right and voting right” to protect life, marriage, and religious liberty.

Right now, Catholics are faced with the possibility of electing a government that could force religious people to violate their faith in an “untold different numbers of ways,” Pavone told LifeSiteNews.

“Do we want an administration that believes that the government can run roughshod over a person’s religious beliefs?” Pavone said. “Or do we want an administration that’s going to respect and protect those beliefs like the law already says that they must? That is a fundamental question. We will see a continuing change in that direction for the worse” under a hostile government.

The 2016 election will influence not only what happens during the next four to eight years but what will happen “in the next 40 and 80 years” with a new group of Supreme Court justices and federal judges, the pro-life advocate and priest explained.

“There’s no way to overstate the importance, the implications, for a generation or more, on public policy right now with this election,” Pavone said.

This is part two of a series on Catholics and the 2016 election.