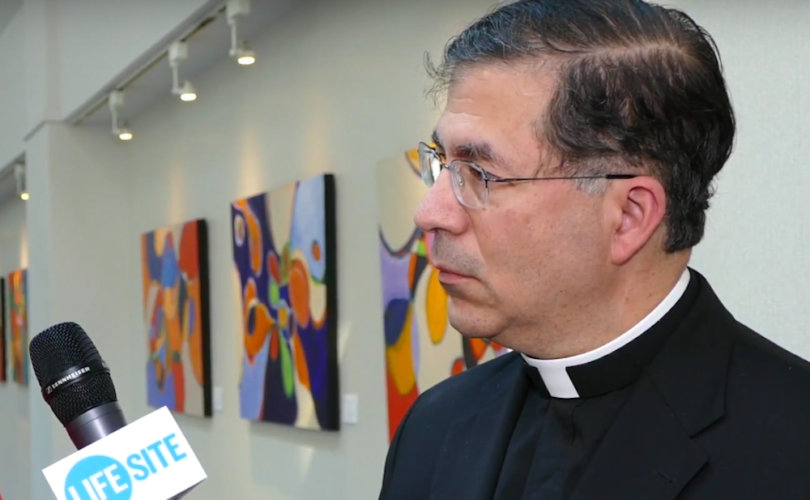 This is Part 3 of a 4-Part series on Catholics and the 2016 election:
Part 1 – Can a Catholic justify voting for a pro-abortion candidate?
Part 2 – What Catholic voting says about the state of the Church in America
Part 4 – How churches are ‘more free to speak’ about elections than they think

September 13, 2016 (LifeSiteNews) — Voting isn’t about feeling good and there is no reason for Catholics to sit out the 2016 election, Father Frank Pavone told LifeSiteNews.

“We might feel like we’re uncomfortable voting for a particular person even if we know it’s the better of the two choices,” said Pavone, the national director of Priests for Life. “Voting is not about what’s good for me. It’s about the common good.”

“A vote is not about liking the person. … A vote is a transfer of power,” he said. “And we transfer the power to best of the viable alternatives.”

Pavone compared voting in the 2016 presidential election with changing a runaway train’s tracks in order to limit its damage.

“At the end of those two tracks, the damage is going to be done,” he said. “But what if you know that less damage is going to be done at the end of track B than at track A? It’s not that you intend any damage; you don’t. But it’s beyond your control. Wouldn’t you switch the train to track B, even if you couldn’t stop it? To lessen the damage, to reduce the harm? Of course you would.”

“People should never think that by not voting at all they escape responsibility for the outcome,” said Pavone, noting that Catholics at the beginning of Mass ask for forgiveness for “what I have done and what I have failed to do.”

Those who abstain from voting in a certain race or voting at all “still have responsibility for the [election’s] outcome, because if you don’t vote at all, that took away a vote from the better of the candidates,” the priest explained.

Pavone said Catholics should consider that when they vote for a candidate they are essentially voting for an entire administration.

“You are also putting someone in the office of the Secretary of State, the Surgeon General, the Attorney General, the Secretary of [Health and Human Services], and in fact thousands of positions in the federal administration — not to mention that you’re also putting a certain type of person on the Supreme Court, and on all the other federal courts that decide so many issues of public policy,” he said. “Who are the people the president brings with him into office?”

It is “critically important” for Catholic voters to recognize the significance of party platforms, Pavone said.

“You have to consider, what do the parties represent?” he asked. “The platform contains an entire philosophy, a set of policy preferences, a whole worldview, and the people … [on politicians’] staffs are going to be people who are … more or less consistent with the position, the philosophy, the worldview, of that particular party.”

“This is so much more than, ‘Oh, that candidate said something bad or this other one said this other thing,’” Pavone said. “It’s not about what they’re saying in a particular set of remarks. What are they representing? And we need to look at that closely.”