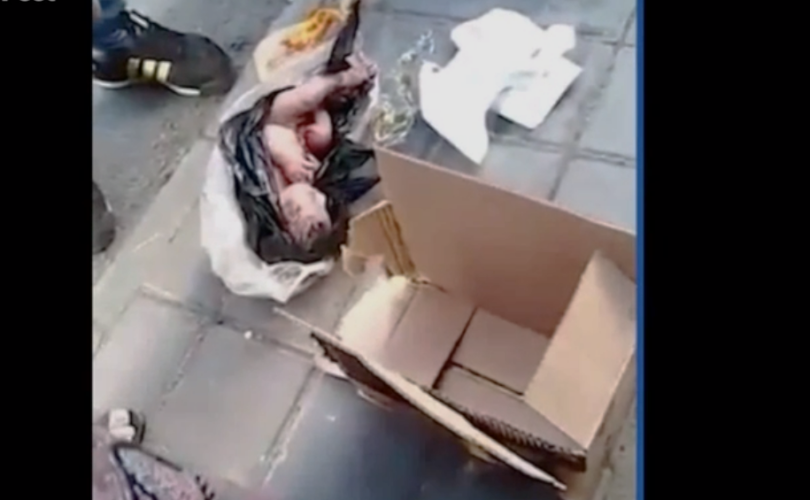 TEHRAN, Iran (LifeSiteNews) — A tearjerking video out of Iran shows a garbageman rescuing a newborn baby boy who was stuffed into a trash bag and abandoned in a city dumpster.

In the harrowing footage posted by the New York Post on May 25, the unnamed garbageman in Iran’s capital city of Tehran can be seen lifting a black, tied-closed trash bag carefully from a dumpster and placing it delicately on the ground. Afterward, the video angle changes to show the man carefully untying the plastic bag, at which point a baby can be seen moving inside with his umbilical cord still attached.

The baby boy, who is in stable condition according to local reports, appeared unharmed in the footage despite the dreadful circumstance, and was transported immediately to a local hospital by first responders.

According to the New York Post, the garbageman was alerted to the dumpster after he said he could hear muffled breathing sounds coming from a trash bag.

Local authorities have said they are investigating the situation, which is just one of many examples of the child abandonment crisis occurring in Iran.

Calling the rash of child abandonment cases a “horrifying” crisis, a former director of welfare issues in Iran’s Ministry of Interior stated that around 1,000 children under age 3 are abandoned each year, with many activists claiming the true figure is likely much higher.

While activists point to poverty as the reason for child abandonment, the problem is far from confined to developing nations such as Iran.

Safe places where mothers can anonymously drop off their infants, often referred to as “baby boxes,” have been constructed across the United States in recent years to avoid situations in which babies are haphazardly discarded and left to die.

Even with the growing prevalence of “baby boxes,” a disturbing video of an 18-year-old mother in New Mexico surfaced in January showing the young lady tossing her baby in a dumpster before driving off.

Much like in Iran, the New Mexico baby was saved by a Good Samaritan and the mother was subsequently charged.