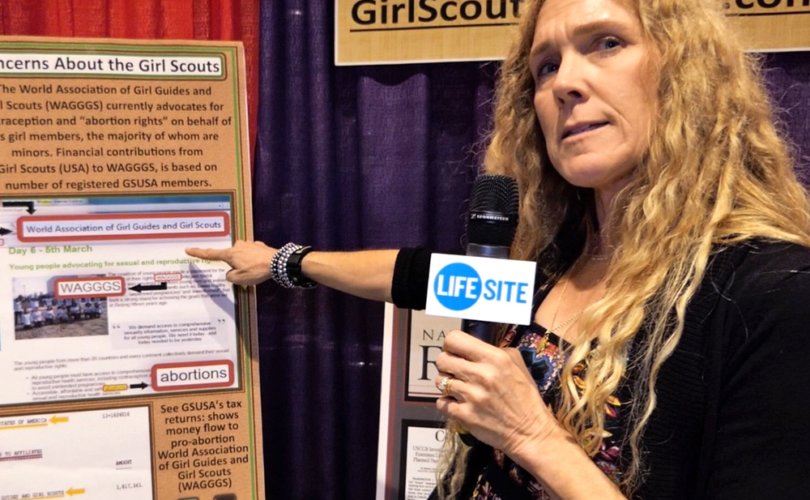 WASHINGTON, D.C., February 7, 2017 (LifeSiteNews) — American parents sending their little Sally or Joan to Girl Scouts to learn essential life skills may be horrified to learn that the organization funds and partners with the world's leading abortion advocacy organization.

Rochelle Focaracci, former leader of her daughter’s Girl Scout's troop, told LifeSiteNews that the organization's “money trail” to abortion is indisputable. She spoke to LifeSiteNews while supervising an anti-Girl Scouts booth during an event at the March for Life in Washington last month.

Focaracci, co-editor of Girl Scouts: Why Not, explained how Girl Scouts USA belongs to the World Association of Girl Guides and Girl Scouts (WAGGGS) and pays an annual membership fee of $1.8 million.

“WAGGGS advocates for contraception and ‘abortion rights’ on behalf of its girl members,” she said. WAGGGS, she pointed out, openly partners with the International Planned Parenthood Federation.

WAGGGS is also closely tied to the UN Population Fund and its agenda, which includes graphic sexual education for children from the earliest ages, free access to contraceptives and abortion for minors, and protection of “right to privacy” so youth can hide their sexual activity, pregnancies, and abortions from parents.

Focaracci said the more registered Girl Scouts there are, the more money WAGGGS receives for its work, part of which includes a pro-contraception and pro-abortion agenda.

A signboard at Focaracci’s booth showcased a screenshot of the Girl Scouts income tax return, where a $1.8 million “membership quota payment” made to WAGGGS was highlighted.

“Here’s the money trail,” she said. “It’s here [in the income tax return], every year.”

Focaracci also noted how Girl Scouts partners with The Coalition of Adolescent Girls, an organization that has direct ties to the UK abortion provider Marie Stopes International.

“Marie Stopes actually provides abortion,” she said. “Their little slogan is ‘Children by choice, not by chance.’”

Focaracci once saw the Girl Scouts as a wholesome endeavor that she hoped would help her daughter grow into a strong and confident woman while having a lot of fun along the way. But that all changed in 2008 when she was shocked to learn that part of the Scouts’ agenda stood in direct opposition to her Christian values of respecting life and living chastely by treating one’s body as a temple of the Lord.

The Girls Scouts’ connection to abortion along with its ties to leftist groups pushing gender ideology (here and here) have caused controversy in recent years.

Last year, Archbishop Robert Carlson of St. Louis cut diocesan ties with the Girl Scouts over its involvement in promoting contraception and abortion. He directed pastors to support other scouting options for the girls of the archdiocese.

“Girl Scouts is exhibiting a troubling pattern of behavior and it is clear to me that as they move in the ways of the world it is becoming increasingly incompatible with our Catholic values,” he said in a letter at that time.

In 2012, Indiana state Sen. Bob Morris refused to sign a resolution honoring the Girl Scouts’ 100th anniversary because of “disturbing” information that had surfaced about the organization’s relationship with Planned Parenthood.

In 2011, then-Auxiliary Bishop James Conley of Denver warned that participation in the Girl Scouts risks opening young women to the pro-abortion agenda because of the organization’s approach to sexuality and “reproductive freedom.”

Concerned parents have the option of alternative scouting organizations for their daughters, such as American Heritage Girls or Frontier Girls.