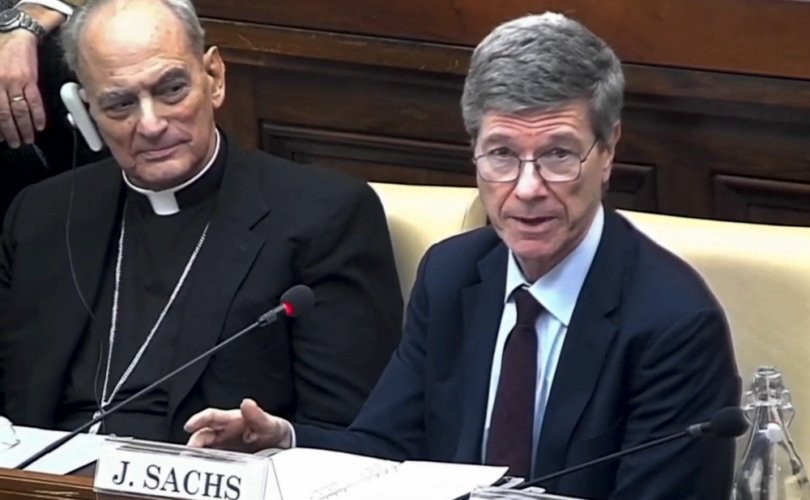 Jeffrey Sachs, with Bishop Marcelo Sanchez Sorondo on his right, speaks at Vatican-run conference on ‘New Forms of Solidarity’ in Rome, Feb. 5, 2020.

February 6, 2020 (LifeSiteNews) – Pro-abortion globalist and U.S. citizen Jeffrey Sachs attacked the United States at a Vatican-run conference in Rome, calling the land of the free and the home of the brave not only a “problem” but “dangerous” for its opposition to what he called the world’s “big consensus” on economic issues and the climate.

Sachs was the keynote speaker at the Feb. 5 conference on “New Forms of Solidarity: Towards fraternal inclusion, integration and innovation” at the Pontifical Academy of Social Sciences.

Argentine Bishop Marcelo Sanchez Sorondo, the Chancellor of the Pontifical Academies of Sciences and Social Sciences, smiled and nodding approvingly during Sachs’ ten-minute speech. Sorondo has previously advocated that Catholics have no more than one or two children and The Pontifical Academy of Sciences, which he heads, has come under fire in recent years for hosting pro-abortion, pro-population control speakers with ties to the United Nations.

The recurrent theme of Sachs’ speech was that Trump and the U.S. are a threat to “multilateralism”, meaning the pursuit of common goals by various nations.

An example of the sort of “multilateral” effort supported by Sachs is the UN's “Sustainable Development Goals,” which he helped to draft. Those goals include the aim to “ensure universal sexual and reproductive health and rights,” a euphemism for the legalization of abortion on demand and giving children access to birth control drugs and devices as well as abortion without parental knowledge.

In 2018 Trump told the 73rd session of the United Nations General Assembly in New York: “America is governed by Americans. We reject the ideology of globalism, and we embrace the doctrine of patriotism.”

Sachs began his speech by saying that “multilateralism is not under threat, per se, in most of the world. It is under threat because of the United States, and I want to say this clearly because it's not a game.”

“The U.S. is a problem,” he continued. “It became a far more significant problem with Donald Trump.”

Sachs focused the majority of his attacks on Trump’s foreign economic policies, but also attacked him for his approach to international climate agreements and U.S. military engagements.

“The US has blocked every multilateral initiative of recent years”, Sachs said. It is the only country pulling out of the Paris climate agreement.”

The Paris Agreement has been roundly criticized by pro-life and pro-family leaders, primarily because it calls for “gender equality” and “empowerment of women,” phrases that critics say are used to push the LGBT agenda, contraception, and abortion. In 2018 U.S. cardinal, Joseph Tobin, called on Trump to rejoin the agreement.

Sachs also criticized Trump for pulling out of the JCPOA nuclear deal with Iran and for his economic actions with regards to China. “There is not a China, U.S., trade war”, Sachs continued. “There is a U.S. trade war on China – that is different. This was an unpremeditated attack.”

Sachs accused the Trump administration of “thuggery” and “a complete violation of every international rule” with regards to its military engagement in Iraq. He described the current U.S. administration as “bullies” who make “vulgar threats” and spoke of Trump’s “overt hostility against everybody”.

In a direct attack on Trump’s hopes of winning reelection this year, Sachs said: “I'm sorry to say, it — it's my country — I'm not very happy to say it, but this is an imperial power in decline and it is a dangerous country right now. It will be absolutely dangerous if Trump wins re-election.”

Sachs ended his speech calling on globalists and other leaders gathered for the conference to move forward toward a “decent world,” even if without “unanimity.”

“So, we had a good discussion today. There is really a big consensus on this world for a decent world. It's not unanimous, but let's not depend on unanimity. Let's move forward when a large part of the world wants to do the right thing,” he said.