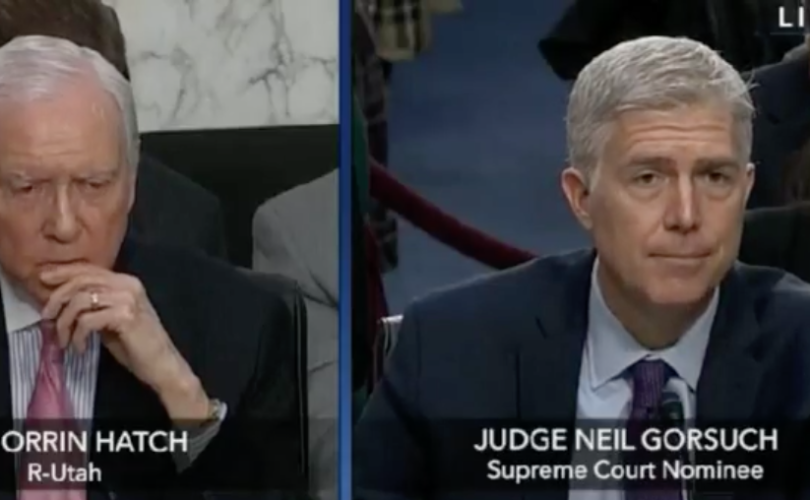 While on the Tenth Circuit, Gorsuch sided with the majority in Hobby Lobby Stores v. Sebelius. The majority ruled that Hobby Lobby shouldn't be forced to participate, even remotely, in the provision of birth control against its religious beliefs.

“How can it be any clearer that the law substantially burdens the plaintiffs’ free exercise of religion?” Gorsuch and several colleagues wrote of the Catholic nuns being forced to participate in the provision of contraception.

“Opponents of your nomination do not like this result,” said Hatch. “They accuse you of being anti-woman. That, of course, isn’t true at all and any fair person would have to conclude it’s not true. Your critics simply demand that, as a judge, you must follow their political priorities that availability of birth control is more important than religious freedom.”

“I have two questions about your decision,” continued Hatch. “Isn’t that really a policy dispute that should be addressed by Congress, and was your job on these cases to impose your or anyone else’s priorities or to interpret and apply those statutes the way Congress enacted them?”

“Senator, our job there was to apply the statute as best we could understand its purpose as expressed in its text,” replied Gorsuch. “And I think every judge who faced that case – everyone – found it a hard case and did their level best. And that’s all any judge can promise or guarantee. I respect all of my colleagues who addressed that case.”

Hatch then read a quote from Gorsuch in his concurring opinion in the Hobby Lobby case: The Religious Freedom Restoration Act “does perhaps its most important work in protecting unpopular religious beliefs, vindicating the nation’s longstanding aspiration to serve as the refuge of religious tolerance.”

“In other words, Congress enacted RFRA to apply broadly and robustly to ensure that among other things, the little guy would be protected as much as the big one,” said Hatch. “Is it fair to say that the Court’s decision in Hobby Lobby and your concurring opinion upheld this purpose and in doing so effectively promoted religious tolerance?”

In addition to protecting the Little Sisters of the Poors' right to not be forced to participate in the provision of drugs and devices they morally oppose, RFRA protects the right of everyone to freely live out their faith, Gorsuch explained.

“It applied to a Muslim prisoner in Oklahoma who was denied a halal meal,” he said. “It’s also the same law that protects the rights of a Native American prisoner who was denied access to his prison sweat lodge it appeared, solely in retribution for a crime that he committed and it was a heinous crime. But it protects him, too. And I wrote those decisions as well, Senator, yes. I wrote the – the Native American prisoner case and I participated in and I wrote a concurrence in the Muslim prisoner case.”