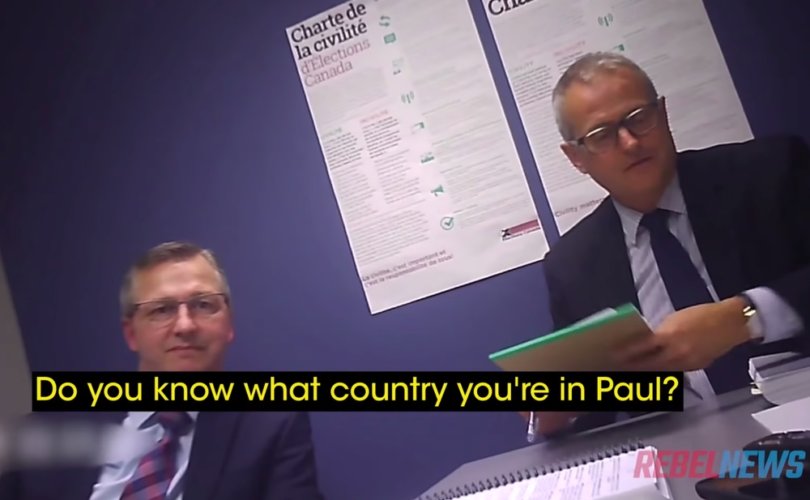 OTTAWA, Ontario, January 31, 2020 (LifeSiteNews) – A well known Canadian media personality and political activist says he is being investigated because he chose to publish a book critical of Canadian Prime Minister Justin Trudeau during the recent election, and for not “registering” his book with the government to promote it.

Rebel News editor Ezra Levant released portions of a video on Wednesday in which he secretly recorded himself being interviewed by government agents.

A letter was sent to Levant during Christmas from the Commissioner of Canada Elections via registered mail. The correspondence (which you can read here), accuses him of breaking the law in violation of the Canada Elections Act and asks him to submit to an interview.

He agreed to be questioned, but made sure to film portions of the interview. He was accused of violating Canadian election laws because he promoted his book, “The Libranos: What the media won't tell you about Justin Trudeau's corruption” during the 2019 federal election season.

Levant posted parts of his police interview here, in which he says: “Whoever heard of an author being interrogated by police, that’s how they do it in China or Iran, not Canada.” Levant has promised to post additional portions of his interview at a later date.

In June of 2019, the federal government amended Canada’s Elections Act. The rules require third parties, including non-profit groups, to register with Elections Canada if they spend more than $500 on any kind of “political advertising.” This includes any spending which goes on to boost positions taken during election campaigns regarding issues of public policy. The new Elections Act also sets spending limits on third-party election advertising.

During the 2019 Canadian Federal Election, Levant promoted his new book with posters, lawn signs as well as billboards and other methods. According to Levant, the Election Act exempts books from the new law.

States the act: Election advertising means the transmission to the public by any means during an election period of an advertising message that promotes or opposes a registered party or the election of a candidate, including by taking a position on an issue with which a registered party or candidate is associated. For greater certainty, it does not include […] (b) the distribution of a book, or the promotion of the sale of a book, for no less than its commercial value, if the book was planned to be made available to the public regardless of whether there was to be an election.”

“How can you publish a book without planning it ahead of time,” Levant says to investigators in his video. “You know we have fixed election dates.”

Prime Minister Trudeau has a track record of promoting abortion despite being a Catholic. He recently said he is no longer personally opposed to abortion and pledged billions of tax dollars to fund abortion worldwide for ten years in a pre-campaign announcement.

Investigators also probed Levant about Rebel News staff and its hiring practices in the investigation. In specific, they wanted to know why the news outlet has staff working for them who are critical of Trudeau. Investigators also asked Levant why he did not register his book with the government with the new third-party election advertising laws.

Levant responded: “The day I register with the government to write a book, is the day we no longer are the true north strong and free. And if Elections Canada’s commissioners are stupid enough to prosecute me for writing, publishing and promoting a book, about an election, during an election, then that’s an important fight to have.” “You’re being un-Canadian by summoning an author to your offices.”

Some prominent Canadian figures took to Twitter on Thursday (link to screengrabs if possible) to voice their support for Levant. Some examples include Brett Wilson a Canadian philanthropist and businessman known for calling out the Trudeau government, and Randy Hillier, an independent member of the Ontario Provincial Parliament.

Hey Police. Back off. Please.

This is @liberal_party hypocrisy at its worst.

And you know it. https://t.co/XwDPtZnVQI

I watched the video and find it difficult to believe this secret complaint was not immediately thrown in the trash and the author not admonished for an attempt to abuse the statute and process. The elections commissioner ought to removed from office for incompetence https://t.co/1XKJ4TKxVJ

Levant’s interview was conducted in Ottawa by two former senior RCMP officers who did not disclose to him where the initial complaint came from. After pressing the investigators, he managed to get them to say that the grievance did not come from them, but rather from someone outside their office.

In his video, Levant can be heard saying: “I don’t want to provide you anything, because I think this is an unlawful investigation, I think it’s political in nature, I think it's probably unconstitutional so I don’t want to provide you with anything. I’m here under protest, I didn’t want to come here, but your letter made it clear that coming here would reduce any penalties so it makes sense for me to come here, but I come here under some duress.”

“How can I push back against a complaint you won’t show me. How do you think this is going to look in court when we take this to a judicial review.”

During the interrogation, investigators tell Levant that he is being interviewed in regards to Rebel News Network: “Oh I know that, and I’m just asking you to confirm, that not, that not a single other, loving book of Trudeau is being investigated,” he can be heard saying adding:  “I’m not a censor like you, I’m not a bully and a censor, I’m not a bureaucrat looking to justify my budget like you, I go out and earn my living everyday, fella.”

“You call in authors, to grill them about a book criticizing your boss, think about who you are.”

He also said that he was there “under protest” and that being there was contrary to the Constitution. Investigators did mention to him that he was free to leave at any time during the investigation and that he was permitted to not answer any questions.

He also promised to fight the investigation saying on his Twitter account:  “Every ounce of energy I have, every dollar I have and can raise, every trick of the trade I can deploy, I will deploy to smashing this law.”