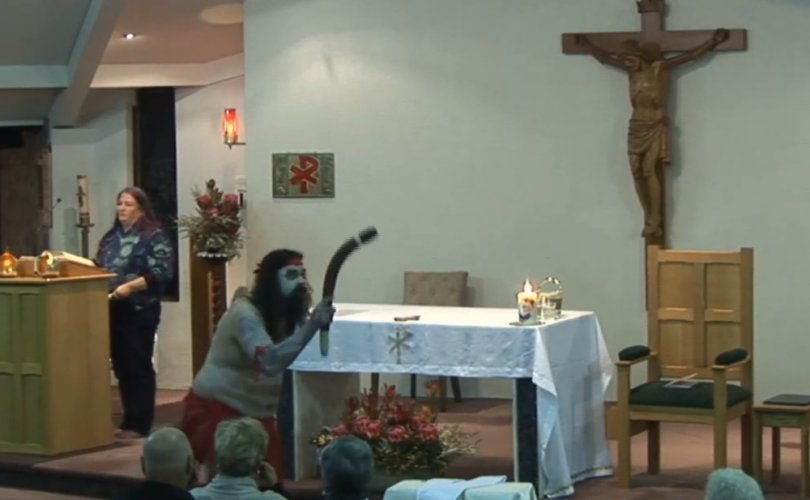 A man invokes spirits prior to the ordination of a deacon in an Australian parish in Milton, New South Wales, Aug. 28, 2020. Milton Parish / Youtube

MILTON, New South Wales, Australia, September 8, 2020 (LifeSiteNews) — Pagan spirits were invoked via drumming, chanting, and a ritual dance prior to the ordination Mass of a married deacon in Australia.

Philip and Bee Butler sang, and Philip danced, a ritual they called a “Welcome to Country” before the August 28 evening Mass in St. Mary Star of the Sea Catholic Parish in Milton, NSW, Australia.

Beforehand Philip Butler stated that he and his wife are members of the Budawang people of the Yuin nation.

In an introduction to the aborigional ritual, Philip Butler said that he and his family were proud to welcome Justin Stanwix, the ordinand, into their community. He said that their songs and his dance would ask a number of spirit birds and animals to “look after us all and keep us safe while we’re in country.”

After the first song, Butler danced before the altar, singing and banging sticks or rattles together.

“I asked for protection from the air, the earth, and then the ocean,” he explained when he returned to the ambo.

“And then that dance to call the spirits of all those animals to look after us all and keep us safe.”

Butler’s short speech was greeted with applause and followed by the entrance hymn, Australian Paul Mason’s “The Power of the Spirit.”

During the Mass, Bishop Brian G. Mascord of the Diocese of Wollongong invited Butler to join him in purifying the congregation. As the bishop sprinkled the faithful with holy water, Butler followed him with a smoking basket of vegetation. According to traditional Australian aboriginal beliefs, smoke from certain plants can drive away evil spirits.

The Mass was posted to Youtube, where a number of viewers expressed outrage.

“Why oh why are the paganistic smoking/cleansing involved in a so-called Holy and Sanctified Church; does not this Bishop believe in God nor His Holy Church?” asked a Fr. Neivandt.

Bishop Mascord told LifeSiteNews via email that the “Welcome to Country” was not a religious ritual, but a cultural ritual of “respect and welcoming visitors to the land of the Traditional Owners.”

“It has been a part of Aboriginal and Torres Strait Islander cultures for tens of thousands of years. The essential elements of welcoming visitors and offering safe passage remain in place to this day,” Mascord wrote.

A ‘Welcome to Country’ occurs at the beginning of a formal event and can take many forms including singing, dancing, smoking ceremonies or a speech in traditional language and/or English,” he continued.

The bishop added that the ritual had greeted both Saint John Paul II and Pope Benedict XVI when they visited Australia.

“The understanding of this ancient cultural ritual of hospitality is in keeping with the special care of hospitality enjoined on Christians (cf. Romans 12:13),” Mascord wrote.

“This leads to and encourages the virtues of charity, fraternity and social friendship in people of every race and tongue, whose faith God alone knows.”

During St. John Paul II’s 1986 visit to Australia, he honored aboriginal culture and told Australia’s first peoples to keep “what is best” of their traditional ways. At the same time, he told them that Jesus Christ was calling them.

“Jesus calls you to accept his words and his values into your own culture,” he said in a speech well-known to Australian Catholics.

“To develop in this way will make you more than ever truly Aboriginal.”

According to Australian Geographic, the “Welcome to Country”, which was indeed celebrated in the past when one aboriginal group wished to travel through the lands of another, has been mainstream in Australia only since 1976. Performed at a Perth Arts festival at the request of a visiting Maori troupe, the concept was eagerly promoted by Australian tourism boards.

The “Welcome to Country” does not have to follow a prescribed set of words and changes from people to people and event to event. Australian performer Dr. Richard Walley, describing what he did to placate the Maori visitors, stated that he invoked the “good spirits” of his and the visitors ancestors and the land.

In December 2019,  a Catholic youth festival organized by the Australian Catholic Bishops’ Conference (ACBC) also began with a “Welcome to Country” ceremony.  At its conclusion, the speaker said: “May all the gods bless you and may all our spirits give you goosebumps, not just today but for the rest of your lives, and we know then we’re on the right path.”

Afterwards a Catholic commentator told LifeSiteNews that beginning a Catholic youth festival with a blessing from ‘the gods’ should be shocking but isn’t thanks to the appearance of the Andean “Pachamama” at the Vatican.

“And it can hardly be a surprise when this festival started with a ‘Welcome to Country’ which is really the most central and modern public ritual of the pagan, animist, and pantheistic religion practised before Christianity arrived in Australia,”  said Bernard Gaynor, a Catholic layman and prominent commentator.

“We live in a time of crisis for the Church. The youth need clear teaching and leadership. Instead they are being encouraged to abandon the central tenets of the faith,” he continued.

“It really is a terrible scandal that this Catholic festival opened in the most anti-Catholic way possible.”