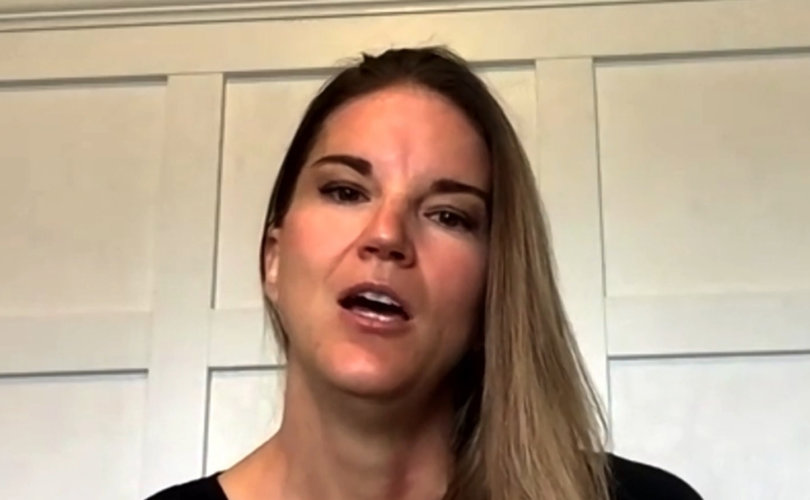 (LifeSiteNews) — A young mother from Utah shared with LifeSiteNews her nightmarish experience of developing severe adverse reactions immediately after receiving the COVID jab as part of the AstraZeneca COVID shot trial.

Brianne Dressen from Utah was a healthy mother of two young children and a pre-school teacher who eagerly signed up to the AstraZeneca COVID vaccine trial back in November 2020, as she was “confident that this was going to be our way out of the pandemic.” She received a first dose of the AstraZeneca vaccine on November 4 and started experiencing adverse effects within an hour of getting the shot.

Dressen first experienced tingling in her arm, blurred vision, hyper-sensitivity to sound, light and touch, dizziness, nausea, and leg numbness. Weeks later, she was admitted to the hospital after her legs “stopped working” and she became incontinent. She had to undergo intense physical therapy, including re-learning how to walk.

Dressen was later diagnosed with a number of serious health conditions which affect her nervous system. She shared her ordeal with LifeSiteNews correspondent Jim Hale.

After a first of “many visits to the emergency room” ruled out multiple sclerosis and other major neuro-degenerative disorders, Dressen was sent home where she had to stay in a room by herself because of her extreme sensitivity to sound.

“My sensitivity to sound was so severe that even my little girl’s voice was too much for my ears,” she recalled.

She also suffered from hypersensitivity to light and had to “put towels on the windows to make the room completely black.”

Dressen lost 20 pounds, as she suffered from nausea and vomiting, and experienced difficulties swallowing her food.

She said she was certain that the vaccine was responsible for her condition.

“There is no question in my mind that the vaccine caused this reaction,” she said, before expressing anger and frustration at the fact that AstraZeneca did not investigate her case thoroughly, as would be expected during a clinical trial.

“You would hope that there would be someone that would be appropriately tracking the data, that these cases (even if they’re rare) are evaluated, that they are discussed, that the information is disclosed in a full and transparent manner. Unfortunately, that has not been the case,” she said.

“I really wish I could say that the drug companies did their due diligence with this, but they didn’t,” she added.

Dressen also revealed that her case was not included in the list of severe adverse events that was published by AstraZeneca. “And now there’s their published clinical trial data. I’m not in it,” she said.

AstraZeneca claims to follow up with all serious adverse events cases for up to 720 days but monitored Dressen over a much shorter period of time.

“I definitely was a serious adverse event,” said Dressen, “I was followed up with for 60 days.”

The pharmaceutical giant also agreed in their contract with clinical trial volunteers to pay for any injury or medical need that would result from the vaccine. An agreement that they did not honor in Dressen’s case.

“After months of repeated pleading and fighting with them to help us with the massive pile of medical bills, I have 590 dollars from them.”

For a long time, doctors could not figure out what was wrong with the young mother. They first diagnosed Dressen with “anxiety” from the COVID vaccine. But she was then able to go to the National Institutes of Health (NIH) where she received appropriate diagnoses, which included a number of nervous disorders such as: non-length-dependent neuropathy, short-term memory loss, sensory neuropathy, dysautonomia and severe postural tachycardia syndrome.

The young woman still suffers from these adverse effects to this day, almost a year after having been vaccinated, and her life has not been the same since.

“My body went from functioning at a normal, healthy level; I was able to take care of my kids and my work, too,” she said. “Now, my big accomplishment today will be talking to you and the fact that I made myself breakfast.”

LifeSiteNews correspondent Jim Hale then asked Dressen to discuss how this event changed her views on the pharmaceutical industry.

“This has been very eye opening for me,” replied Dressen, “I feel like I’ve been plucked out of the matrix.”

Dressen explained that she grew increasingly distrustful of government agencies as she witnessed evidence of them purposefully withholding information from the public.

“These [adverse] reactions are not being disclosed to the public,” she said. “Because of this, the public is not being provided informed consent, but also the medical community is not being informed appropriately that these reactions can happen.”

Dressen also claimed that attempts at withholding information on adverse events from the public does not only come from social media platforms but also from within the medical world.

“There’s medical censorship happening,” she said, “there’s censorship with the research; we have researchers that have tried to get case studies published in scientific journals and they can’t get them published.”

The young mother became emotional when she recalled that some of the people suffering from these adverse effects have committed suicide.

“I had to write a eulogy for a dear friend of mine, for her husband to read after she took her life,” she said.

Dressen and Hale then discussed other cases of people that have suffered loss as a result of the vaccine’s adverse effects, including that of Ernest Ramirez, a father from Texas who recently lost his 15-year-old son to the Pfizer vaccine. Hale also mentioned that in a recent interview with LifeSiteNews, Dr. Robert Malone, a pioneer of the mRNA technology used in the development of the COVID vaccines “told us, flat out, if you have an adolescent son, he should not be getting the vaccine.”

Among some of the initiatives taken in response to this issue, Dressen mentioned a website with over 500 testimonies and accounts of people who have suffered from COVID vaccine adverse events.

Additionally, she announced that a press conference is going to take place on November 2 on the steps of the Supreme Court to hold government agencies accountable.

“We’re uniting with those like Ernest Ramirez and we’re going to the capital to plead with our elected officials to help us and to hold these agencies, the FDA, the CDC, the NIH, accountable, because we know acutely just how much they know,” she said.

In conclusion of the interview, Dressen insisted that she was not anti-vaccine and explained that her husband had gotten the COVID vaccine, but she advocated for informed consent and not coercing people.

“I really believe that everybody should have appropriate full informed consent so they can make an appropriate choice for themselves; and also, because there is a risk, there absolutely needs to be a choice,” she said.

She condemned government agencies for letting people who suffer from these adverse events deal with them on their own and for abandoning them.

“The problem is, if you get a vaccine reaction like this, you are completely on your own. The government agencies are not going to help you,” she said. “You will not be able to get financially compensated and your medical teams will have no idea what to do with you.”