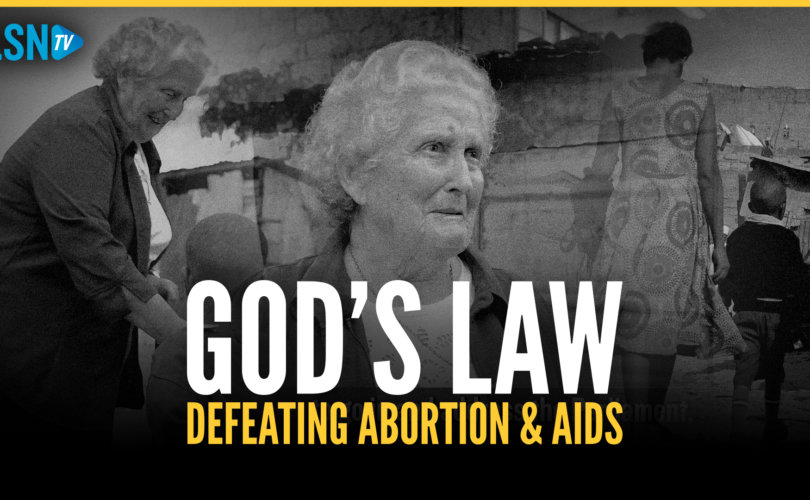 NAIROBI, Kenya (LifeSiteNews) — An Irish missionary nun has said “God’s Law” was and is the answer to the AIDS crisis she fought as an obstetrician and gynecologist in Africa.

In an exclusive interview with LifeSiteNews, Sr. Miriam Duggan explained how her abstinence program was adopted by the Ugandan government in the 1970s and brought the AIDS rate in that country from 27% to 6%.

“When AIDS came in, at that time, people were kind of saying the answer to it is to have condoms,” Sr. Miriam told LifeSiteNews. “And as a gynecologist I knew that condoms weren’t 100% safe … I felt the only real solution to stopping AIDS was to go back to God’s law, if you like, of no sex before marriage and faithfulness in marriage.”

“ … [B]y the time we got our first testing machine, it (AIDS) was already 17% in the country (Uganda). And then it quickly began to rise,” Sr. Miriam explained. “So, at one stage, it went up to 27%, but after we started the abstinence program and spread it throughout Uganda, the level fell right down to 6%, particularly among the young people.”

“So we had a lot of support from the president and his wife as well,” she added.

The 86-year-old Limerick woman also explained how showing Ugandan parliamentarians “The Silent Scream,” footage of an abortion recorded by Dr. Bernard Nathanson, helped to keep abortion illegal there when a new constitution was being drawn up.

“They never legalized abortion in Uganda, and up to today, it’s not legal.”

Sr. Miriam is now working with some of the poorest people in Kenya to lift them out of poverty by sponsoring them through college and giving them as much personal formation as possible.

Some of her students have even been baptized into the Catholic faith as a result of her Catechism classes.

The Irish nun raises as much money as possible every year to send her students to a technical training college, putting them on the path to escaping the extreme poverty of the slums.

While roughly 75% of young people in the slum are unemployed, 89% of those who have gone through Sr. Miriam’s program and been sponsored into college by her are now in gainful employment.

It costs only $600 USD to send one student to a technical training college, where they will learn an employable skill within one year.