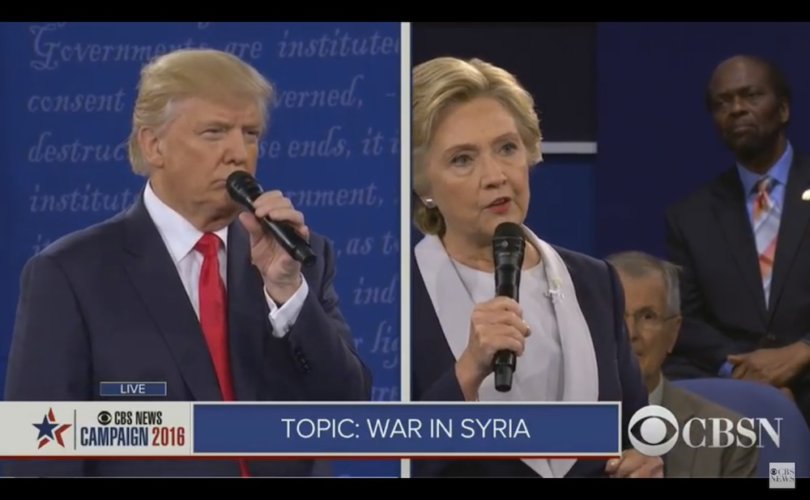 ST. LOUIS, October 9, 2016 (LifeSiteNews) – After the first presidential debate this year was entirely silent on the moral issues affecting the cause for life and family, Sunday's second debate nearly followed suit until the closing minutes, when an audience member asked the candidates for their views on Supreme Court appointments.

The issues came up as Hillary Clinton renewed her vow to appoint pro-abortion and pro-same-sex “marriage” justices, and at the same time took the opportunity to attack Donald Trump on his support for pro-life and pro-family justices.

“Donald has put forward the names of some people he would consider and among the ones that he has suggested are people who would reverse Roe v. Wade and reverse marriage equality,” she continued. “I think that would be a terrible mistake and would take us backwards.”

Trump responded by saying he is “looking to appoint justices very much in the mold of Justice Scalia…people that will respect the Constitution of the United States.” He did not mention abortion or same-sex “marriage.”

The debate, the second of three, came in the wake of the release of a hot microphone tape from 2005 in which Trump made shockingly lewd remarks about groping women. In the opening segment focused on this tape, Trump denied ever sexually assaulting anyone. He fired back against Clinton’s criticism by pointing out that her husband has been accused of raping women and that as a lawyer, Clinton defended a man who allegedly raped a 12-year-old girl.

The candidates blasted each other’s foreign policy, healthcare, and tax positions before finally touching on the Supreme Court minutes before the debate ended.

Trump called Scalia a “great judge” and said the names of potential Supreme Court justices he has floated have been “very beautifully reviewed by just about everybody.”

Clinton has not released the names of anyone she would potentially nominate to the Supreme Court.

“Obamacare is a disaster,” Trump said of the Affordable Care Act, which funds abortions in some states. Its many regulations may end up funding “sex change” surgeries as well. Clinton defended President Obama’s signature legislation and said she would “fix” it rather than repeal it.

Neither candidate mentioned abortion or same-sex “marriage” in the first debate.

Roe v. Wade and its sister case Doe v. Bolton allow unlimited abortion on demand throughout all nine months of pregnancy. The United States has some of the most liberal abortion laws in the world.

Since the Supreme Court redefined marriage to include same-sex couples in Obergefell v. Hodges, numerous religious business owners have faced discrimination for refusing to participate in same-sex ceremonies.