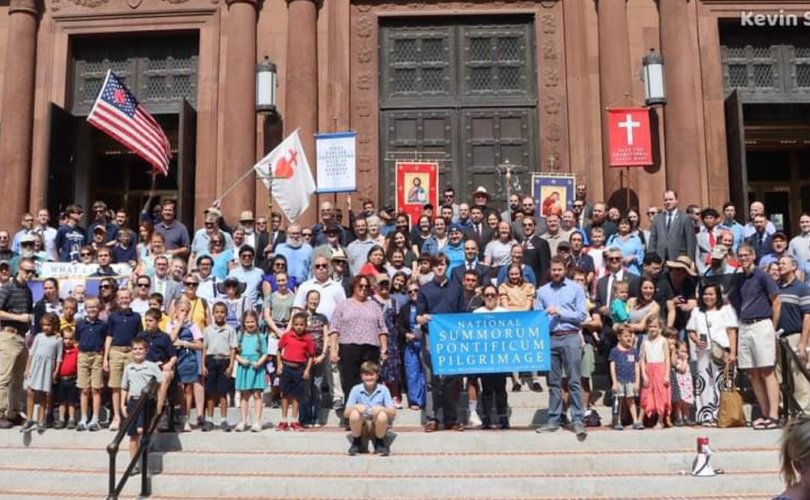 Catholics outside Washington, D.C.'s Cathedral of St. Matthew after the pilgrimage Twitter / @tlmpilgrimage

(LifeSiteNews) – “This is just about being Catholic: As it was in the beginning, is now, and ever shall be,” the National Summorum Pontificum Pilgrimage organizer told LifeSiteNews of the historic event.

On Saturday, Catholics processed about five miles from Arlington’s Cathedral of St. Thomas More to Washington, D.C.’s Cathedral of St. Matthew the Apostle, expressing sorrow over draconian restrictions on the Traditional Latin Mass and gratitude for Pope Benedict XVI’s Summorum Pontificum, the now-canceled 2007 document that freed the Church’s ancient liturgy to be more widely offered.

The new restrictions in the Diocese of Arlington and Archdiocese of Washington are widely expected to decimate numerous parish communities, likely resulting in church closures. This crackdown, which has been called discriminatory and a form of insidious segregation, has devastated Catholics all over the east coast.

In response, Noah Peters, a recent convert, banded together with fellow Catholics to organize the September 17 walking pilgrimage. The hundreds of attendees prayed the rosary, sang hymns, and honored the Catholic Church’s rich liturgical patrimony, the existence of which is now threatened by the very men tasked with preserving and promulgating it.

READ: ‘Like a knife going through my heart’: Catholics devastated by Arlington bishop’s Latin Mass crackdown

“Everyone who attends a TLM can’t help but be drawn into it and to be drawn into a deeper love for Catholicism and a deeper communion with the Catholic Church and with Christ,” observed Peters. “The generosity that had previously been shown by the bishops in both Arlington and D.C. was really tremendous and did allow so many of us to experience the Traditional Latin Mass.”

That all came to a screeching halt at the end of July, when Cardinal Wilton Gregory and Bishop Michael Burbidge announced their harsh implementations of Traditionis Custodes, the 2021 papal edict abolishing Summorum Pontificum. The Traditional Latin Mass is now available in only three parish churches in the Diocese of Arlington – previously known for its large number of diocesan priests who offer the Old Mass in addition to the Novus Ordo – plus five segregated, non-parish “locations.”

The Archdiocese of Washington has banned the Old Mass in parish churches entirely, relegating it instead to the Franciscan Monastery in the nation’s capital, and a chapel and mission church in Maryland.

The Diocese of Arlington’s restrictions were “much harsher than anyone had anticipated,” said Peters.

But “the ultimate legacy of Traditionis [Custodes]” is that “we were forced to kind of pull together as a community.” It also “forced us to grow closer to our priests.”

“We are praying for the Pope and for Bishop Burbidge and for Cardinal Gregory,” he added.

“There have been worse persecutions in the history of Catholicism,” he said. “We have to just think about the reasons why we go to the TLM in the first place.”

“We’re almost just like children being drawn to something that’s so grand and mysterious and so much bigger than any one of us.”