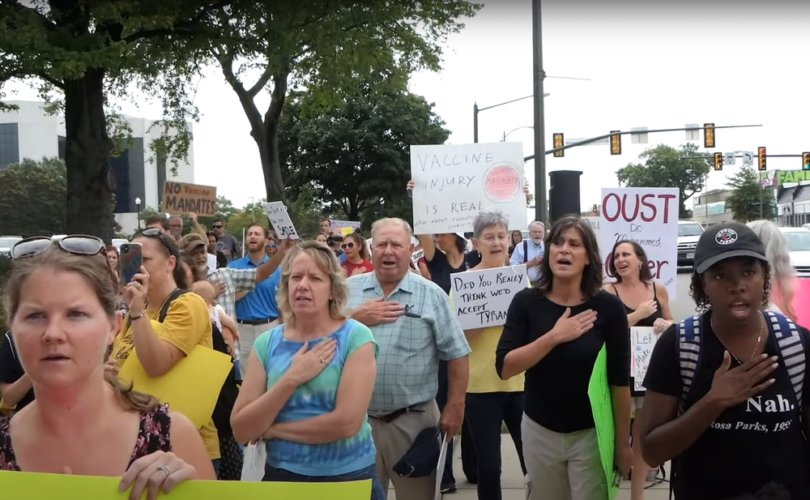 RICHMOND, Virginia, September 2, 2020 (LifeSiteNews) – Hundreds of freedom lovers came together in Virginia’s capital of Richmond earlier today to protest the mandates imposed by the government in the wake of the coronavirus crisis, specifically regarding vaccination. LifeSite’s Jim Hale was on site, interviewing speakers and participants at the “March Against Mandates.”

Virginia Health Commissioner Dr. Norman Oliver, an unelected official, first said in August “that he plans to mandate coronavirus vaccinations for Virginians once one is made available to the public,” according to a report by a local ABC station.

Kathleen Medaries, Director of Communications and Strategy at Virginia Freedom Keepers, which organized today’s “March Against Mandates,” said that Oliver has the power to force Virginians to take the vaccine.

“He’s appointed by the governor’s office. And under emergency powers law, he is given the right to mandate that every adult and child receive a COVID shot if he deems it appropriate,” she said.

The law currently does not provide exemptions for those who do not want to take a vaccine mandated by the state government, and it does not allow even for a delay in getting the shot.

“We have a situation where this unelected official has unilateral authority to make a medical choice for all Virginians, and Virginians are gathered together to say: That’s a problem, we don’t approve.”

Medaries also pointed out the irony that the Virginia government, which in the context of abortion affirmed women who claimed, “my body, my choice,” now flips the script and says, “it’s your body, and it’s my choice.”

One of the speakers, Dr. Leland Stillman, a general physician, told LifeSiteNews that “it’s quite clear from the data” the COVID-19 “is not nearly as virulent or deadly as it was made out to be originally.”

Joe Ordia, another of the speakers at the event, told LifeSite’s Jim Hale that he and his family had come to Richmond “to support medical freedom.”

“We’re very, very concerned that with the current state of fear and hysteria surrounding COVID-19, the government might feel that it’s necessary or proper to force a mandate, certain medical treatments that really aren’t fully tested and may not really be in our interest. So we’re here to stand up for our right for medical freedom.”

Ordia explained that he decided not to vaccinate his children. “I felt that there was just too much conflicting information out there. You’re going to hear from some people today that have personal testimony of themselves being personally injured or their children being vaccine-injured.”