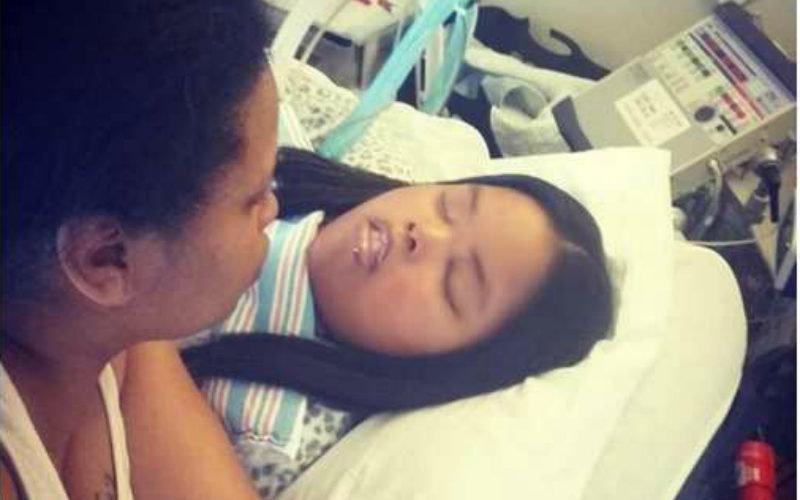 HERNDON, Virginia, July 14, 2016 (LifeSiteNews) — The mother of a teenager who was declared “brain dead” and had to be transferred to a hospital across the country in order to continue receiving medical care told LifeSiteNews in an exclusive video interview that her daughter gives her the strength to continue fighting.

Nailah Winkfield, the mother of Jahi McMath, told LifeSiteNews at the 2016 National Right to Life Convention that despite having received death threats for keeping Jahi alive, God — and Jahi herself — give her the strength to move forward in the legal and medical battles surrounding Jahi’s situation.

In 2013, after routine surgery for sleep apnea and to remove her tonsils, then 13-year-old Jahi went into cardiac arrest. She lost oxygen to her brain and a lot of blood, and doctors at a California children’s hospital subsequently declared her brain dead. Jahi’s family did not want the care keeping her alive withdrawn and had to battle the hospital for their daughter’s life. After Jahi’s “brain death” diagnosis, the hospital refused to give her medical care because in California a “brain death” diagnosis legally classifies a person as deceased.

Jahi’s family was eventually allowed to move her to a hospital in New Jersey, and she is now well enough to live at home with her mother.

“To me, there’s nothing more important to me in this world than my kid, so I’d rather them take my life than to take her,” Winkfield said. “And I always tell people all the time, I’d pull the trigger on myself before I’d pull the plug on Jahi. And I’m serious about that. I would not let anything happen to her within my control.”

Winkfield said one of the underlying issues in the way the hospital treated Jahi was money. Had Jahi died, the hospital would have paid Jahi’s family $250,000, but Jahi surviving surgery with serious complications could mean a much heftier price.

In order for Winkfield to be able to move Jahi from New Jersey back to California, a judge must revoke the adolescent’s death certificate.

“I’ve submitted tons of videos” to the courts of Jahi responding to what she’s asked to do, Winkfield said, along with the testimonies of neurologists and experts saying she is not brain dead.  Now the family must find a judge willing to listen.

Winkfield advised parents faced with a similar situation to stay strong and “just never give up.”

Winkfield told LifeSiteNews that it was “shocking” when doctors informed her she didn’t have the right to continue caring for her daughter once they had diagnosed her with brain death.

“They told me I had 72 hours to say my goodbyes to her,” Winkfield said. “I immediately told them no, I didn’t feel that she was dead, and I felt that I didn’t want care withdrew from her and it was my decision. They told me at this point it was not — it was no longer my decision or anybody else’s.”

“I gave birth to her, I’ve been taking care of her her whole life, and you’re gonna tell me I don’t have rights to [take care of] her?” Winkfield asked. “But if she was … to commit a crime or something, and go to juvenile hall, they would say, ‘You have to pay for all these expenses for her. You’re responsible for her.’ But now that I want to keep her alive, [they’re] saying, ‘no, you’re no longer responsible for her.’ We are responsible for her.”

“You’re really not safe anywhere” if your child is diagnosed with brain death, Winkfield warned, and the only state that allows a religious exemption for parents who wish to continue treatment is New Jersey.

Winkfield said that because of her decision to continue caring for her daughter, she has received death threats, people have photoshopped pictures of Jahi to make her look “like her skin is deteriorating,” and her opponents have even called the police and told them a dead girl is in Winkfield’s house.

“People go to the extreme,” Winkfield explained. “I don’t understand why, because I’m not bothering anybody, I’m not asking anybody for anything. The only thing I’m asking is for my child to have a right to live. That’s it. And I want her to have the same benefits and the same treatment as any other child with a disability. That’s all I’m asking for.”