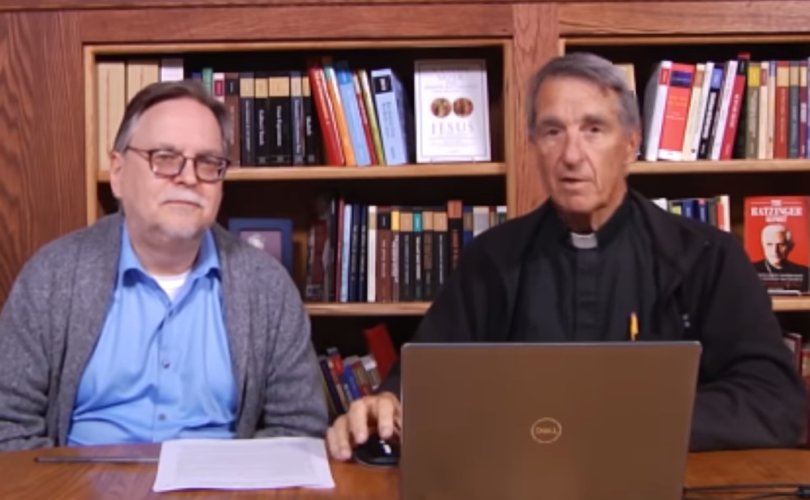 SAN FRANCISCO, May 1, 2019 (LifeSiteNews) ― Both the founder and the CEO of the leading U.S. Catholic publishing company have issued a statement saying that an open letter released this week accusing Pope Francis of heresy should not be ignored by Catholic leaders in Rome.

On April 30, Fr. Joseph Fessio and Mark Brumley of Ignatius Press published a short video expressing their opinions on the importance of the “Open Letter to the Bishops of the Catholic Church”. About 20 prominent clergymen and scholars issued the open letter accusing Pope Francis of being “guilty of the delict of heresy.” They asked that the bishops of the Catholic Church, to whom the open letter is addressed, to “take the steps necessary to deal with the grave situation” of a pope committing this crime.

“It’s an important document,” Fessio said, mentioning that it had been published that morning by LifeSiteNews. “I think something needs to be said about it. There’ll be time for reflection later.”

Ignatius Press’ CEO Mark Brumley said that his first reaction was that the letter was “something that someone of some significance at the Holy See should address.”

“As I read through it, I wasn’t quite persuaded that we had formal heresy or even that the statements [cited] of the Holy Father were materially heretical… But because of the arguments in the document and the persons making the argument, I think this is something that should be taken seriously.”

Among the signatories are world-renowned philosopher Professor John Rist and theologian Fr. Aidan Nichols, OP, theologian Fr. Thomas Crean, OP, and philosopher Dr. Peter Kwasniewski. Since the letter’s release, 12 additional distinguished signatories have added their names, bringing up the total number of signers to 31 as of this writing.

Brumley explained that this would mean someone at a “high level” in Church leadership should address the questions asked by the document and show how Francis’s statements could be shown to be consistent with Catholic doctrine.

“[There] should be some explanation,” he said. “It shouldn’t just be left to people to wonder.”

Fessio said that his first thoughts when reading the document was that it would be ignored if its authors weren’t significant.

“But as a matter of fact these authors ― some of them, anyway ― are quite reputable.”

Fessio noted that even if some of the signers might be construed as being extremists, “even extremists can sometimes make good points.”

“So the second question was ‘Well, what about the document itself? Is it outrageous? Is it outlandish? Is it well-balanced? Is it substantive?’ And I wasn’t sure. It’s 20 pages long, so I read it this morning,” he said.

“There’s seven different … heresy counts,” Fessio continued.  “Each one is clearly stated. Each one of them is backed up by previous Church teaching, either councils or popes. And then they show where Pope Francis has made statements that seem to contradict these Church teachings, and then also how by his actions and his inactions, in some cases, he was to corroborate that understanding.”

The heresies the authors of the Open Letter attribute to the Argentinian pontiff are as follows:

Fessio concluded that, based on its internal merits, the document could not be dismissed as the work of extremists.

Brumley observed that this kind of document is widely circulated instantly with today's communication technologies. Because of the reach of the document, and because of the high stature of its authors, he believes it should be addressed by the highest pastoral authorities.

Citing St. Ignatius of Loyola’s dictum that one must try to give another’s words the most charitable interpretation, Fessio said that he felt that Church authorities should address the document, rather than ignore it, so as to give an acceptable interpretation of Francis’  controversial statements.

“These serious accusations should be looked at and responded to and [authorities should] show how the pope’s statements can be interpreted and should be interpreted as consistent in meaning with the Church’s teaching and the doctrine of the faith.”

Brumley said that he was worried that the Holy See will just ignore the letter because they believe there are people who will be against Francis no matter what he says. However, the Ignatius Press CEO believes that there are other people who don’t want to believe that the pope is heretical and will want “to see and understand his comments as consistent with the teaching of the Church.”

“So I think those people would welcome clarification.”

“This is clearly not insubstantial. It’s clearly not mere extremist carping or ranting. It’s a statement carefully worded and carefully thought through. If it’s not responded to, then it will lead to greater confusion, and people will not be certain about whether they can trust the Pope or not.”

He insisted that the document should be responded to “in such a way that we can reunite people together under the one mind of Christ which is represented by His bishops.”

Brumley added that given contemporary criticism of how the Church has been “ineffective” in answering “certain questions” in the past, the document simply cannot be dismissed

“You can’t ignore these things,” he said. “They pile up. They create a narrative. They reinforce bad attitudes in people. And even people of good begin to say ‘Well, there must be something to this. Why does the Holy See not speak out?”

“That’s what I’m worried about.”