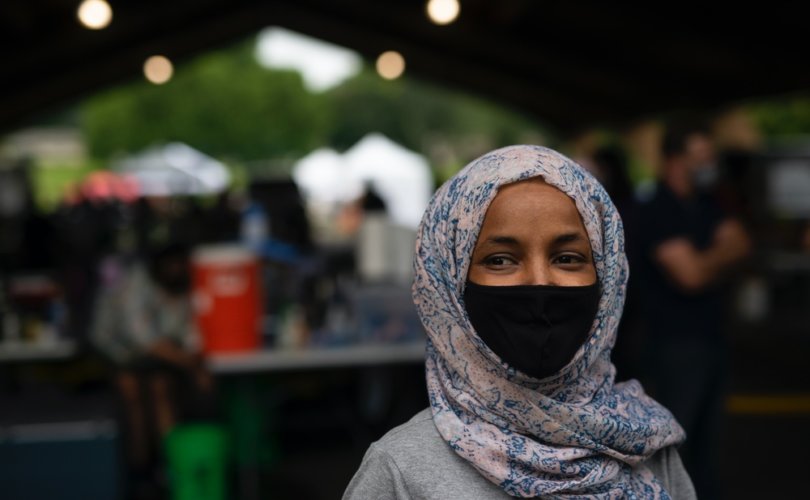 “Ballot harvesting is real and it has become a big business,” Project Veritas founder and head James O’Keefe said in a press release. “Our investigation into this ballot harvesting ring demonstrates clearly how these unscrupulous operators exploit the elderly and immigrant communities—and have turned the sacred ballot box into a commodities trading desk.”

The video contains Snapchat clips of activist Liban Mohamed bragging about and displaying some of the hundreds of absentee ballots in his car, all of which are for his brother, Minneapolis City Councilman Jamal Osman. “Money is everything, money is the king in this world,” Mohamed says. “Look at all these, my car is full. All these are for Jamal Osman… We got 300 today for Jamal Osman only.”

“Our investigation found that among three locations inside Ward 6, a ballot harvesting triangle, where the scheme operates: the Riverside Plaza apartments,  the senior citizen community at Horn Towers and the Minneapolis Elections and Voter Services office at 980 E. Hennepin Ave., which also functions as a voting location and ballot drop-off site,” Project Veritas reports.

Veritas was tipped off to the issue by Minneapolis community activist Omar Jamal of the Somali Watchdog Group, who says “it’s an open secret” that Rep. Omar’s political machine “will do anything that she can do to get elected and she has hundreds of people on the streets doing that.”

Jamal and a Veritas reporter interviewed a local ballot harvester who says he was paid to vote in August 11’s special election, and that activists working for Rep. Omar request ballots and fill them out themselves.

“They come to us,” the harvester said. “They came to our homes. They said: ‘This year, you will vote for Ilhan,’ They said: ‘We will make the absentee ballots. We will fill out the forms for you and when you get them back, we will again fill it out and send it.’”

“When we sign the voting document and they fill it out is when they give us the money,” the whistleblower continued. “The minute we signed the thing [ballot] for the election. That’s when we get paid.”

Later in the video, a Democrat operative identified only as Jamal tells an undercover journalist that he has witnessed abuses, such as some of the ballots Mohamad collected being blank, yet did not speak up because he feared the repercussions and felt he could not make a difference. He further noted that the scheme exploits recent immigrants’ ignorance of the law.

“Through no fault of their own the new immigrants are learning about democracy from the ballot harvesters,” Jamal explained. “When they get here, because of that ignorance, not knowing how this, all things work. Sometimes they even think it's legal.”

Another source identified Rep. Omar’s deputy district campaign director Ali Isse Gainey as a central figure in the scheme, who allegedly oversees and approves “all kinds of shenanigans” from temporary addresses to insufficient identification.

“They have perfected this system,” the source said. “This is what they do. They will tell you we are applying for your ballot. They take a picture of your social security and your driver's license. They have a database. When the ballot comes, they track it, sometimes, they make fake emails. They track the ballot. Then, they come and pick up the ballot—unopened.”

This is totally illegal. Hope that the U.S. Attorney in Minnesota has this, and other of her many misdeeds, under serious review??? If not, why not??? We will win Minnesota because of her, and law enforcement. Saved Minneapolis & Iron O Range! https://t.co/yete31P680

“The amount of truth to this story is equal to the amount Donald Trump paid in taxes of ten out of the last fifteen years: zero,” Omar spokesman Jeremy Slevin responded in a statement to Newsweek. “And amplifying a coordinated right-wing campaign to delegitimize a free and fair election this fall undermines our democracy.”

Even so, the contents of the Veritas exposé were enough for Hennepin County Attorney Jeff Wojciechowski to inform the conservative watchdog group that “we will be investigating.”

In 2016, O’Keefe went undercover and was able to obtain a Michigan ballot for the rapper Eminem, whose real name is Marshall Bruce Mathers III.