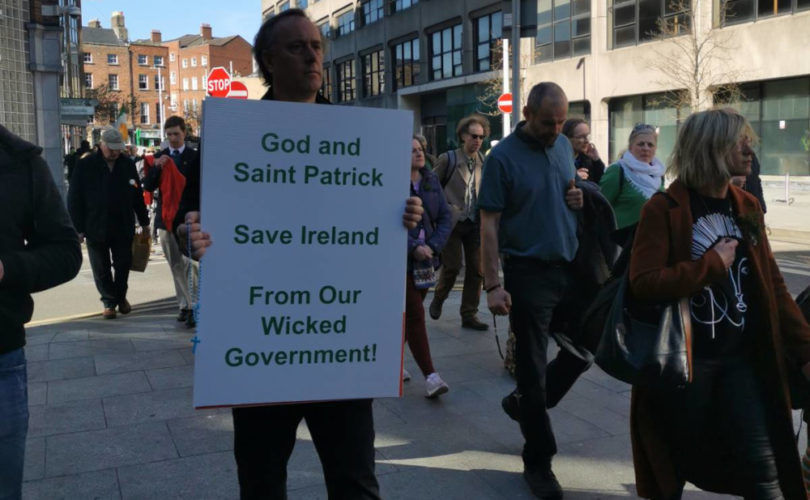 DUBLIN, Ireland, March 18, 2021 (LifeSiteNews) — Amid severe COVID-related restrictions, hundreds of Irish Catholics gathered in Dublin to hold a procession to “reclaim” the day for the Holy Trinity, to take a stand against the government’s forced closure of churches, and to make an act of reparation for abortion in the country.

Attendees were faced with checkpoints barring entry to Dublin, and at the Garden of Remembrance, police “threatened to arrest participants for either breaking their 5km limit or for participating in an event made illegal by draconian Covid-19 regulations.” At least one fine was issued, with a couple fined €300 for being over 5km from home.

However, upon the arrival of a statute of Our Lady of Fatima to the procession, a “miraculous” change took place, as police stopped taking down names and addresses and instead backed off and “escorted the procession to our destination.”

St. Patrick’s Day in Ireland is usually commemorated by state-organized secular parades, which “make a mockery of St. Patrick,” and “promote and encourage the very things that St Patrick came to preach against.” Due to COVID-related restrictions, all such events have been canceled, people have been ordered to stay at home and travel no more than 5 kilometers, and businesses have been closed.

Churches have been ordered to cease public worship by the government, with allowance given for “private prayer” only, while a host of so-called “essential services” are permitted to remain open.

In a statement provided to LifeSiteNews, those who gathered, collectively dubbed “St. Patrick’s faithful,” said they “wanted to use this opportunity to hold a procession to remind people of the true message of St Patrick, which was the preaching of the gospel of Jesus Christ and to call on the Irish people to turn back to God. We want to show and remind people that Christianity is a religion of courage and of hope, and to proclaim the message that if people turn back to God, then He will heal our land.”

Despite a promised “ring of steel” of police presence around the city, several hundred people attended the procession, which went from the Garden of Remembrance to St. Stephan’s Green, “where it was then peacefully concluded with religious hymns.”

Catholics in Dublin today defied their incompetent Pagan government and Drew Harris's Parade Commisions to honour St. Patrick, Christ and Our Lady in song and in prayer pic.twitter.com/QysdzZPwKv

Rosaries and hymns were prayed on the procession, as the event proceeded peacefully, and the amazed bystanders were given holy cards and medals.

“St. Patrick’s faithful” had three intentions for the procession, firstly to give honor to the nation’s patron St. Patrick and to retake his feast in a Catholic manner. “Secularists may think that shutting down the economy and restricting peoples’ movements will slow the spread of disease,” the statement read.

“However, as Catholics we are called to follow the examples of the men and women the Church has canonised as saints. The saints are our ‘experts’. Among the most important today to take inspiration from are St. Charles Borromeo, the Cardinal-Archbishop of Milan in the [1570s], who responded to a deadly plague with public processions and[,] Pope St. Gregory the Great, who also responded to a plague in Rome with public processions.”

But the faithful also sought to have the churches reopened for public worship, which has been prohibited for much of the last year, and no Masses have been permitted since December 26, 2020. Hence, the procession was intended “to show Catholics that it is important to push back against government attempts to restrict public worship. Openly professing our Faith in public is an essential part.”

“The government can never suspend our God-given rights which includes the right to practice our Faith especially in public where we can do the most good to souls. The Irish government is not simply suspending constitutional rights; they are trying to destroy our God-given rights and that is why it is so important to maintain some public presence.”

In addition, the attendees were making a public act of reparation for the “sins of Ireland,” namely “the legalisation of abortion, same-sex ‘marriage’, divorce, and corruption of our children in schools through perverted sex-ed programmes.”

Leading up to the event, a leafleting campaign took place, with over 40,000 leaflets distributed to houses in Dublin and a number of other counties, using the words of St. Patrick to call people to repentance.

Meanwhile, in Waterford City, local Bishop Alphonsus Cullinan walked through the streets of the city blessing people with a relic of St. Patrick. As in Dublin, the streets were uncharacteristically empty, due to the government’s lockdown.

Attendees expressed the hope that the event would be an annual one, so that Catholics do “not allow the secular, atheistic world to corrupt our Catholic festivals. One of the best ways to counter these attacks is to revive the original purpose of the Catholic festivals whether it be St. Patrick’s Day, Christmas or Easter.”