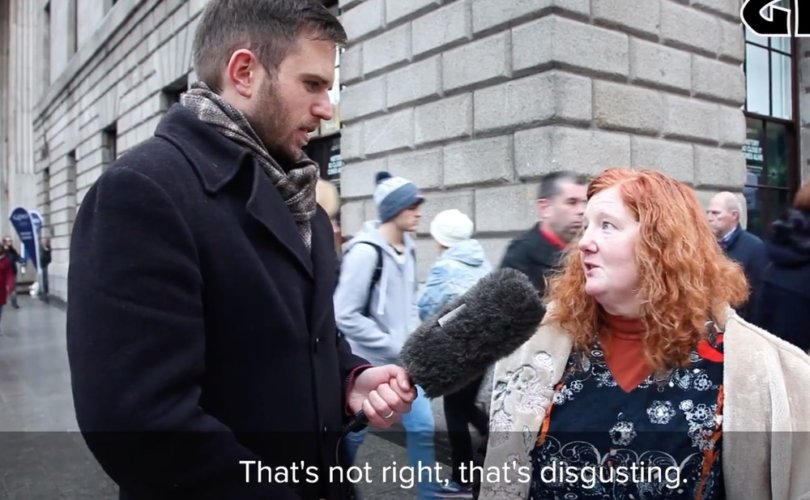 In the film, shot two weeks ago by Ireland’s Life Institute, pro-life campaigner Tim Jackson, 29, asks passersby how they voted in the referendum regarding the repeal of the pro-life Eighth Amendment to the Constitution. Then he informs them that the Health Minister’s abortion bill allows for the abortion of disabled children up until birth – and that aborted babies will not be given pain relief, life-saving treatment if born alive, or a proper burial.

Jackson told LifeSiteNews that the video shows only those who were disturbed by the horrors permitted by the bill. Interviewing the others was “eye-opening,” he said.

“It was eye-opening because of number of them were not moved by what we were describing,” he said. “It [shows] the power of propaganda….and the effectiveness of the media’s misinformation in dulling consciences.”

The pro-life campaigner said that their callousness didn’t depress him unduly, however, as he’s been campaigning for months and years. Jackson made headlines last year by going on a hunger strike in an attempt to shame the Irish government into watching a video about the realities of the abortion procedure.

Jackson says formerly pro-life Ireland’s change of heart on abortion is the fault of the media.

“[Repeal the Eighth] really was a media-led campaign that gave people a taste for it,” he said.

The media had been doing “a slow and steady turn towards abortion” for years before the 2018 referendum, Jackson added, journalists being products of Ireland’s pro-abortion education system. At a certain point, the media contained a “critical mass” of pro-abortion journalists.

Given the pro-abortion bias of the Irish media, pro-life campaigning and media in Ireland may be more crucial than ever.

“The media haven’t covered the more cruel aspects of the bill,” Jackson said.