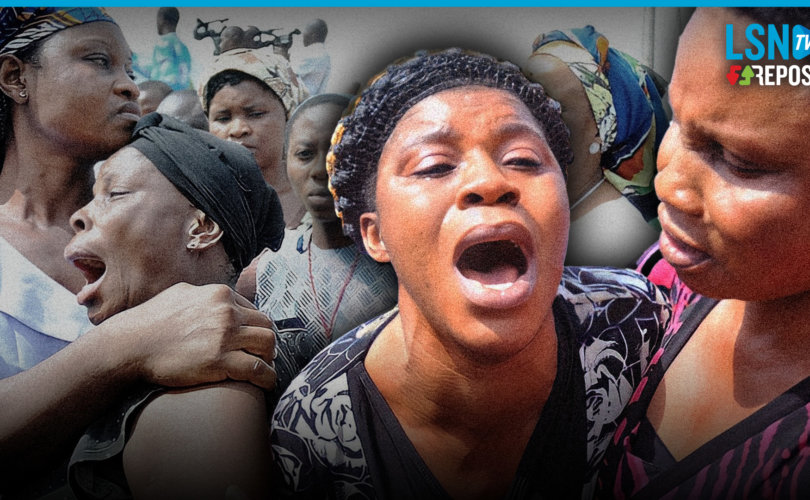 KADUNA, Nigeria (LifeSiteNews) — Footage has emerged of Nigerian Christians and Muslims being flogged with sticks and canes by Islamic terrorists in the latest ransom video to surface of the kidnapped victims.

The group were kidnapped on March 28 when a train travelling between the capital Abuja and Kaduna was attacked by Fulani terrorists who blew up the tracks, killed several passengers and abducted 61 victims.

Local newspapers reported one Islamic terrorist goading the Nigerian government, saying, “They can’t do anything. Are you not relying on guns? Your aircraft and your guns are like spider’s web to Allah. We are for Allah, we are doing it for Allah. We are not afraid of anybody.”

“You should know that this is a little that you’ve seen. Know that, if our demands are not met, this place will become an abattoir,” the Fulani Islamist warned.

Three men, including Ayodeji Oyewumi who spoke in the video, and two pregnant women have been released since the footage emerged, but over 40 remain in captivity in a Kaduna forest near Abuja.

One woman screams “God will judge you!” at the terrorists, telling viewers that “a man flogged me now!”

Apparently speaking under duress in the video, Mr. Oyewumi tells viewers it is “not the intention of the terrorists to keep us in the forest, but the government of Nigeria have given a deaf ear (to the victims).”

“And that is why we are calling on the big countries like America, England and France, and the international community, nations like Saudi Arabia, to come and save us from this mess.”

“But the government of Nigeria keep quiet and show no sign of sympathy,” he added, before calling on the international community, including the United Nations, the African Union and the Economic Community of West African States (ECOWAS), to “please come into this matter so that it can be resolved, so that we can go back to our families.”

An Arabic-speaking terrorist then says, “I come to you my brethern in peace” before pointing to his victims and claiming “this is the result of what the Nigerian government have caused, because the government has not listened to us.”

“The committee they formed does nothing apart from drinking tea,” the Fulani terrorist continued. “These people you are seeing feel there is no committee that can save them.”

He finished by saying, “What we are trying to do is to fulfill what we stand for,” before the video cuts off.

With public anger growing, Nigerian president Muhammadu Buhari, who is also from the Fulani tribe, claimed his army is making every effort to free the kidnapped victims, but that his government will not pay any ransoms.

The government is also allegedly preventing family members from paying the hostages’ ransoms.

Buhari, who is in his last term, has been heavily criticized by the country’s Christian population for his alleged indifference to the persecution they are facing throughout much of the country.

With a presidential election approaching in February 2023, one Nigerian source told LifeSiteNews that the country is close to civil war, as Catholic candidate Peter Obi leads his Muslim rival Atiku Abubakar in the polls.

“Like at the last election, many poor Christians will be offered bribes to vote for the Muslim candidate,” the source predicted.

A similar video emerged last month from victims of the train attack, with one captive pleading for the government to restore the terrorists’ phone networks so that ransom negotiations could begin with their families.

Meanwhile, the Diocese of Kafanchan announced on July 19 that one of their priests was killed by bandits in northern Kaduna.

Fr. John Mark Cheitnum was abducted alongside another diocesan priest, Father Denatus Cleopas, on the evening of July 15 as they attended a function at the rectory of the Christ the King Catholic Church in the town of Lere.

A diocesan spokesman said that Cheitnum had been “brutally killed by his abductors on the same day of his abduction” but that his body “was later discovered already decomposing on Tuesday.”

While Cleopas escaped with his life, Aid to the Church in Need stated that at least 18 other priests have been abducted in Nigeria since the beginning of the year, with five of those kidnapped in the first week of July, three of whom were slaughtered by their captors.

The risk associated with being a Catholic priest in Nigeria has escalated in recent years as Muslim terror groups, including the notorious Boko Haram, continue to commit atrocities against the Nigerian clergy.

On July 1, more than 700 priests gathered to protest the growing danger to their lives by Islamic terrorists and to mourn the loss of Father Vitus Borogo and Father Christopher Odia, who had both been murdered the week before.

The clerics peacefully protested the murders, holding placards that read “We Are Priests, Not Terrorists!!!” and “Anyone Who Killed Lost His/Her Right To Life!!!”

At least three churches in Nigeria suffered murderous terrorist attacks in June resulting in over 75 deaths and numerous kidnappings. On June 5 at St. Francis Xavier Catholic Church in Owo in the state of Ondo, armed attackers slaughtered 40 worshippers and left 87 hospitalized.

A statement from the president said that “only fiends from the nether region could have conceived and carried out such a dastardly act, adding that eternal sorrow awaits them both on earth here, and ultimately in the hereafter.”

The brutal attack prompted Bishop Lucius Ugorji, president of the Catholic Bishops’ Conference of Nigeria, to condemn the “gruesome” murders, adding that “Nigeria is bleeding. Our land is soaked in blood, from north to south, east to west.”

The government has suggested that the terrorist group Islamic State West Africa Province (ISWAP) was responsible for the June 5 attack, though many Christians believe Fulani terrorists are responsible.

A Catholic Mass and Baptist service were also attacked later in June, with eight people killed and 38 captured.