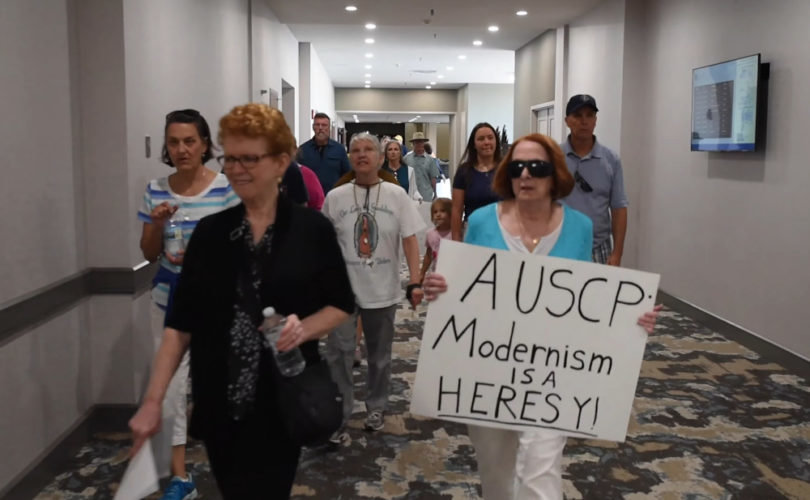 BLOOMINGTON, Minnesota, June 23, 2021 (LifeSiteNews) — As the 10th Annual Assembly of the dissident Association of United States Catholic Priests (AUSCP) continues inside a Minnesota hotel, faithful Catholics stand watch outside, praying the Rosary in reparation for the scandalous clergy group.

“At first glance, this aging group of men assembled outside Minneapolis may appear to be a docile bunch, but the truth is, these are radical men, with radical left-wing agendas who openly endorse heresy,” noted Hale. “And while spouting platitudes about non-violence, [they] are hostile and aggressive.”

Yesterday, Hale was attacked by 3 gray-haired members of the AUSCP who threatened to call the police on Hale simply for questioning their strange beliefs.

“The problem is the AUSCP is a heretical organization pushing women’s ordination, pushing the blessing of same-sex unions, and they even signed a letter of support for legislation that would require Catholic adoption agencies to adopt out children to homosexual and transgender parents,” explained Michael Hichborn, founder of the Lepanto Institute, who was one of the many on site to protest the AUSCP.

“The AUSCP is getting episcopal support from all kinds of bishops; Cardinal Cupich, Cardinal Wilton Gregory, Archbishop John Wester is their official liaison from the [United States Conference of Catholic Bishops], and several other bishops are very, very supportive and active with them,” continued Hichborn.

Rita Zimmerman was part of a group from La Crosse, Wisconsin, that brought a large statue of the Blessed Mother to the prayerful protest. “The Rosary … that’s our power.”

Fr. Richard Voigt said he came “to make reparation for all the sins that are being committed by false priests.” Because of the promises of Our Lady of Fatima in 1917, “we have to make reparation and do penance.”

“What’s going on in the Church is not okay,” said Cathy Harrington of Minneapolis. Because of what some in the hierarchy are promoting, “we as laity need to be heard.”

“We need to be strong for our faith. We need to defend our faith, because it’s being attacked from all corners,” declared Michael Manders, also of Minneaplolis.

“Woe to you, scribes and Pharisees, you hypocrites, you race of vipers, white-washed sepulchers, how will you escape the fire of hell,” said Raymond de Souza, Catholic author and apologist, quoting Christ’s words from the Gospel of Matthew.

“That’s our Lord Jesus Christ, meek and humble of heart, who died for us and wants our salvation,” continued de Souza. “But he will not accept — would never tolerate — this nonsense inside the house of His Father.”

“[The] AUSCP has gone to great lengths to hide their true motives by projecting the impression that they are ‘merely’ progressive while remaining loyal,” explained Lepanto Institute founder Hichborn in 2018. “The AUSCP has directly undermined the authority and dictates of bishops. But worse than this, the AUSCP is actively involved in a well-funded and long-standing international effort to radically change the face of the entire Catholic Church.”