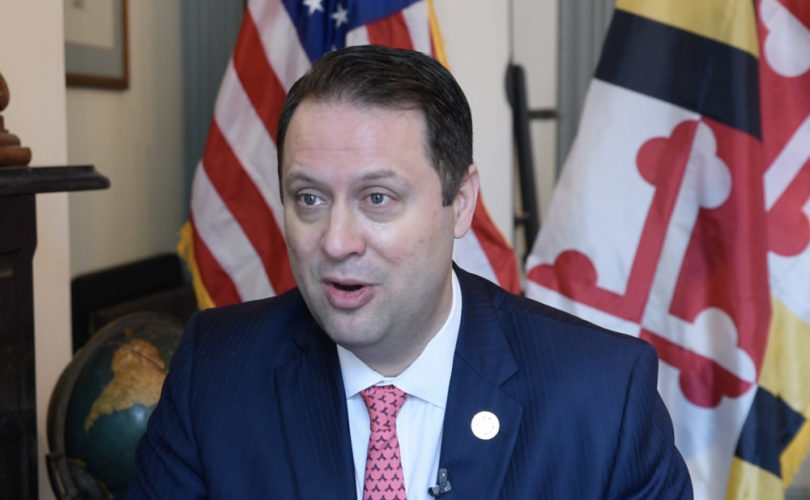 FREDERICK, Maryland, April 29, 2021 (LifeSiteNews) — A conservative Maryland legislator is pushing back on his state attorney general’s effort to force college students to take the experimental COVID-19 injections as a prerequisite to attending school in the fall. The issue of “informed, written, voluntary, and full knowledge consent is something that we Americans hold dear,” and yet this is exactly what forces within the Maryland government risk discarding, Dan Cox explained to LifeSite’s Jim Hale.

Maryland Del. Dan Cox (R), a young attorney with nine children and a rising star in Annapolis, is ringing the alarm about the state government overstepping its bounds and unconstitutionally seizing control of the bodies of its young people against their will.

In an extraordinary 4-page letter sent to members of the Maryland House and Senate, as well as to the University of Maryland Board of Regents, Cox expressed his opposition to mandatory vaccination of students and employees in exchange for education and jobs.

Cox spelled out how the attorney general attempting to mandate vaccinations for students goes against U.S. case history and that “undisclosed or forced human science experiments” go against “the eternal and universal principles of human rights upheld in our Constitution and in nearly every declaration of human rights in civilization.

“If we start with forcing college students to take an experimental vaccine in order to obtain their college degree, it will not end,” Cox predicted in his conversation with LifeSiteNews, noting that the Biden Administration is already informing contractors that they should start forcing their employees to take the vaccine in order for their companies to be able to continue to do business with the government.

Cox pointed out that the United States has fought World Wars over this same sort of encroachment on personal freedom and violent disregard for human life and dignity.

“We have to hold the line here” in Maryland, said Cox, because the government should not have the power to force people, against their will, to do what they believe is wrong: “No state, no person, should be able to force you to do that.”

Del. Cox shared with LifeSiteNews an email he had received from a longtime nurse who has watched severe vaccine injuries and deaths spike from zero to unheard of numbers:

Within the past 3 ½ months, as a result of COVID-19 vaccinations … I have witnessed many patients who have ended up in local ERs, admitted to hospitals and even 4 who have died following vaccination. Vaccination related injuries I have personally observed include: Radical changes in blood values (example: complete loss of white blood cells), internal hemorrhage, heart attacks, respiratory failure, organ injuries (example: kidney and gallbladder), changes in level of consciousness, new onset diabetes, fainting, seizures, dizziness, numbness in extremities, shingles, loss of memory and severe headaches. …

As a nurse, I believe one of the most unethical issues in the COVID vaccination scenario is the lack of meaningful informed consent. Healthcare providers are not talking to patients about the injury risks, manufacturer history, the risks of pathogenic priming, and disease associated risk factors.

“This is not about the health and safety of college students or their family members,” said Cox. “This is about an experimental drug being used to create a necessity for purchasing.”

“We’re at a point now where we see massive international corporations trying to manipulate American law — our freedom — to force individuals into an experimental regimen that is contrary to our history, contrary to Western civilization,” said Cox.

“We need to stand up against it,” he declared. “We don’t have to submit to this. We are made in the image of God. We’re not the same as animals, so we should not be used as animals in experiments.”

Cox explained that statists, particularly members of the political far-left, seek to interpose state rule “into our daily affairs, into our families, into our churches, and yes, into our bodies.”

He cited Parham v. J.R., a landmark U.S. Supreme Court case that dealt with the importance of upholding parental medical decision-making authority: “The statist notion that governmental power should supersede parental authority in all cases because some parents abuse and neglect children is repugnant to the American tradition.”

“There is a direct state attack on religion in America,” said Cox. “The reason is because the religious and the families who believe in God are the core block that are willing to question [government] overreach.”

“They do it with grace, and they do it with truth, and that scares statists who want to simply control people because of the volume of money that they’re dealing with. We’re talking about billions, even trillions, of dollars worth of deals worldwide,” he said.

“But at the core of this lies the question: ‘Do you actually respect the individual in the image of God, or do you believe that the state is God?”

Enough is enough: No “new normal”

In his letter, Del. Cox asks:

So, where does this leave the State police power? Nowhere. There is not a single strict scrutiny basis that exists or could be used by the state to advance what the Attorney General is rumored to have erroneously found as “reasonable” to force-vaccinate anyone in Maryland, more less the students of universities and colleges.

“Religious freedom is sacred,” Cox told LifeSite, noting that “Maryland was founded as a religious freedom colony, and that’s why we have the memory of that in the cross on our state flag.”