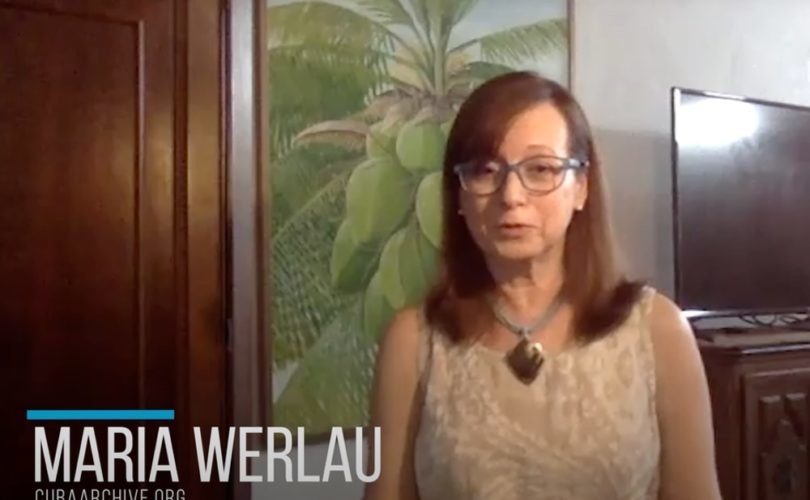 During a wide-ranging interview with LifeSiteNews correspondent Jim Hale, Maria Werlau, Executive Director of Cuba Archive, a.k.a. Free Society Project, explained that the mainstream media have incorrectly portrayed the protests as focusing on denouncing U.S. economic sanctions against the island nation when in reality “most people were chanting for freedom from the dictatorship.”

“I didn’t hear anybody in the streets of Cuba – and there’s tons of video – saying ‘Down with the embargo,’” noted Werlau. “Not one.”

On the contrary, “people were flying U.S. flags.”

Werlau explained that as word spread through social media about a freedom protest in one small city on Sunday, July 11, others throughout the island were emboldened to pour into the streets to peacefully demonstrate.

Citizens who have spent their entire lives under tyrannical communist rule “overcame their historic, ingrained fear,” said Werlau. “And the most amazing thing is they went to the streets chanting ‘Freedom!’ and ‘Down with communism, down with the dictatorship!’”

“This was shocking for the government,” said Werlau. The impromptu cascade of protests “took them by surprise.”

Government forces quickly moved to clamp down on the marchers, and at the moment it remains unknown how many have been detained.

Despite the communist dictatorship cutting off internet, telephone communications, and electricity in many places on the island in order to stifle the nascent freedom movement, Cuban citizens have found ways to get electronic messages and video out to the free world.

Werlau spoke of one video showing police entering the home of a family in order to arrest the father “just because he attended a protest.” The police shot the unarmed father of three as the man’s horrified wife filmed the unprovoked assault.

“I’ve studied the mechanisms of repression in Cuba. Cuba has a higher surveillance rate than the Stasi had in the former East Germany, higher than the KGB in the former Soviet Union,” noted Werlau.

“I think this is going to create a momentum that will be hard to put down,” continued Werlau. She quoted a Cuban priest who announced, “They cannot repress all the people, all the time, everywhere.”

“I think we will see the Cuban situation as ‘before’ and ‘after’ July 11,” she predicted.

Since its founding in 2001, CubaArchive.org has conducted investigations and research with the goal of advancing human rights in Cuba. The U.S.-based non-profit organization documents disappearances, deaths, and killings by the State.

“The facts speak for themselves,” said Werlau. “We have attributed to the Castro regime 3,500 firing squad executions, almost 2,000 extrajudicial killings, and a lot of prisoners dead from minor medical conditions.”

Though she allows that these statistics most likely represent only a small fraction of the real number of victims of the Castro dictatorship, Werlau said that they are enough to convey to the world the horrors of communist rule.

Alluding to the death of George Floyd last year, Werlau pointed out that in the U.S. people pour into the streets by the hundreds of thousands to protest police abuse of just one person, yet in Cuba people have been repressed and victimized for six decades, and people outside don’t seem to care.

Despite their crimes against humanity, Werlau said that the island’s dictators are “celebrated by the world.”

President Obama’s visit to Cuba in 2016 opened the dam, according to Werlau, “and everybody went to Cuba to kiss the dictators.”

“We’ve had Jimmy Carter play ball with Castro; the Obamas did the wave in a baseball stadium in Cuba,” she recounted. “Those are very, very hurtful things, because there’s been so much suffering in Cuba. It’s not just the loss of life. Every Cuban has a story: Families separated, lives reduced to misery, because they are peons of the state.”

“It's a totalitarian state that owns all the economy,” she continued. “The laws are ‘Stalinist.’ That word fits today after the collapse of that failed system, [yet] it remains alive in Cuba.”

“In the end, my real wish for Cuba is a lot of love in order to overcome the rhetoric of hatred, division, class war – all sorts of aggressions to the human soul,” said Werlau. “The only way that Cubans are going to rise and put that behind is with love.”

“That’s how a peaceful transition can happen,” she added.