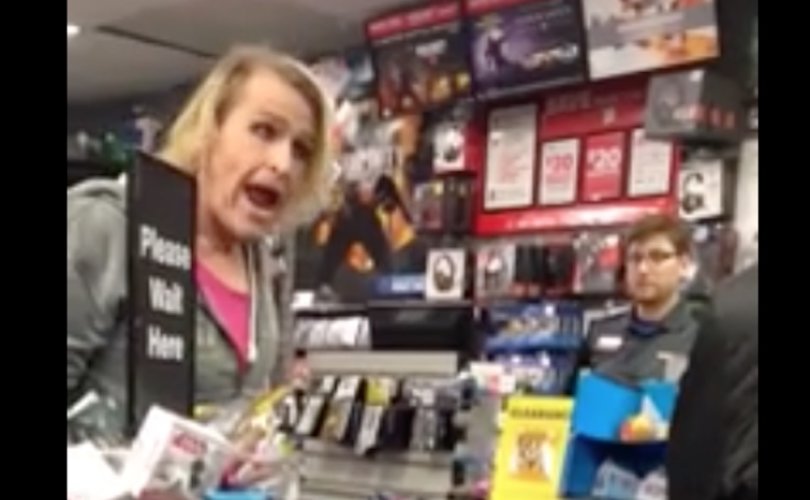 ALBUQUERQUE, New Mexico, January 2, 2019 (LifeSiteNews) – Cell phone footage of a confrontation at a New Mexico GameStop location has gone viral after revealing a customer shouting obscenities and threats at a salesperson for referring to him as “sir” instead of “ma’am.”

The video begins with a customer facing the video game store’s checkout counter with his back to the camera, demanding “my f***ing money back” instead of store credit for a purchase. Presumably going off of his masculine build and voice, a female customer offscreen interjects, “Excuse me, sir, there’s a young man in here, you need to watch your mouth.”

The man turns to her, revealing his equally-masculine face while angrily chiding her that “it’s ma’am! It is ma’am!” She responds by threatening to call the police and asking him to settle down, to which he tells her to “settle down and mind your business.”

The employee then says something unintelligible on camera but containing the word “sir,” to which the customer objects. The employee responds to explain that he was referring to multiple people, apparently including other people in line.

“No, you said sir! Once again it’s ma’am!” the customer objects. “Right beforehand you f***ing said sir!” The employee next says something else to someone containing the word “sir,” but as the camera has panned away from the counter at this point it’s unclear who he was addressing.

“Motherf***er, take it outside, if you wanna call me sir again, I will show you a f***ing sir!” the customer shouts, repeating “motherf***er!” and kicking over a stack of boxes as he walks toward the exit.

The employee apologizes, but instead of leaving the man turns around and demands the store’s corporate number. “Because I’m going to call them and talk about how I’ve been misgendered several times in this store,” he adds.

Next the salesperson and customer trade multiple apologies and demands for the corporate number, which the former agrees to give him while asking him to “calm down and stop cussing.”

“Well I’m gonna ask you for the fifth time to stop calling me a man, because quite clearly I am not,” the male customer adds. He paces and growls in front of the counter, before turning around to head back for the exit.

“You’re just gonna keep bumping your gums and disrespecting trans people in this store. Which I plan on telling the entire LGBTQ community. You’re going to lose money over this,” the man declares before exiting.

None of the individuals seen in the video have been identified, nor has the exact location. It is unknown whether the employee faces disciplinary action of any kind or if his superiors are standing by him.

The left-wing Daily Dot, which claims the story’s online reaction has been “largely transphobic,” reports that GameStop has so far refused to comment on the story, but several employees in the area confirmed they had been forbidden from commenting on the record, and one confirmed the incident took place at a location on Coors Boulevard in Albuquerque.

The conservative Townhall was similarly unsuccessful in getting any on-the-record comments, with answers from five different GameStop locations varying “from not knowing about the incident to hanging up on Townhall and being frustrated with the inquiry.”

“It's interesting that his first outburst is at a woman standing off camera who calls him ‘sir,’ as if a woman, who can clearly see for herself what she is looking at, should have to cater to a man's particular fantasy and properly ‘gender’ him according to his wishes and not according to her own eyeballs,” PJ Media’s Megan Fox observed. “This is the kind of insanity the left wants to foist on biological women in the locker room. Can you imagine encountering him when you're half-dressed and scared? Yikes.”

Biological sex is rooted in an individual’s chromosomes and reflected by hundreds of genetic characteristics. The American Psychiatric Association still classifies gender dysphoria as a mental disorder, as did the World Health Organization until last summer. Gender confusion has been linked to a variety of long-term ills, including higher suicide rates.

While this viral confrontation made for an unpleasant shopping experience for several patrons, gender-confused men demanding to be treated as “women” can and has caused far more serious problems in other settings. There has been growing concern in both the United States and United Kingdom over placing men who claim to be women in female prison populations, for example.

A record number of male inmates in England and Wales claim to be female, a subject that’s garnered controversy in no small part due to cases like that of Stephen Wood, a convicted sex offender who assaulted four female inmates after being temporarily housed in a women’s facility because he “identified” as a woman called “Karen White.” In addition, the UK, Canada, and Scotland have seen cases of male prisoners claiming “transgender” status to secure lighter treatment during their incarceration.