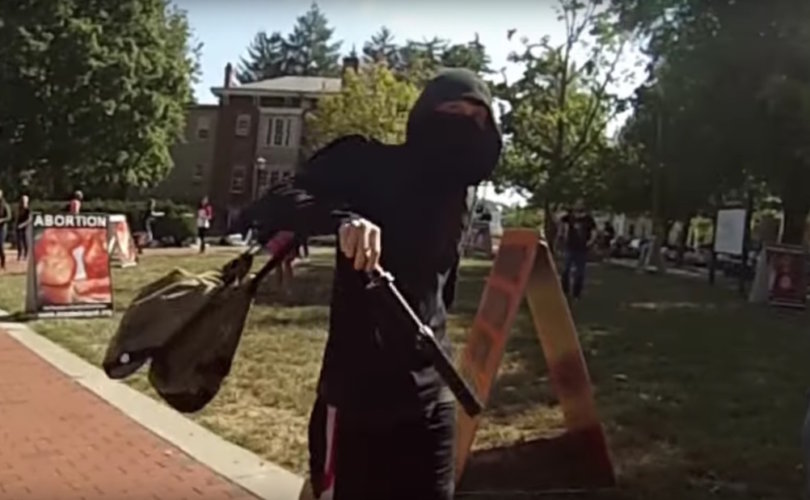 ATHENS, September 19, 2016 (LifeSiteNews) – A masked man vandalized a pro-life display, beating a photo of an aborted baby with a blunt object, during the first outreach of a newly formed student group at Ohio University.

A new video posted online shows a masked young man in a hoodie burst into the midst of a campus display during a joint outreach co-sponsored by Bobcats for Life and Created Equal last Friday.

“As I was standing by one of their signs talking with a passerby, a masked and hooded madman started beating down the signs with what we believe is a nightstick,” Jacob Hoback, the president of Bobcats for Life, told LifeSiteNews.

After knocking over a standing image of an abortion victim, the unidentified assailant began swinging at a second sign bearing a pro-life slogan.

“He ran away before anyone could find him,” Hoback said.

Mark Harrington, national director of Created Equal based in Columbus, said violence is the heart of the pro-abortion message.

“Preborn defenders have been experiencing an increase in vandalism and violence at campuses across the country,” Harrington said. “Unfortunately, this attack could signal a new wave of violence towards pro-life advocates.”

“Hooded and masked thugs behaving violently towards a discriminated minority brings back memories of the KKK,” he said.

The Bobcats for Life chapter held its inaugural meeting as a campus organization the night before, an event exposing the life and views of Planned Parenthood founder Margaret Sanger.

Friday’s campus event inspired a small counter-protest, including one woman dressed as a giant purple uterus.

None expressed any visible dissent to the man’s actions.

“Will this type of pro-choice violence continue as we do outreach trying to save children?” Hoback asked. “I am not worried about myself, but I am worried about other group members’ safety.”

The day after the attack, the group collected 228 baby and toddler items, and more than $100 cash donations to support local women’s pro-life charities. It went off without a hitch.

Anyone who has information about the masked assailant is asked to contact Ohio University police at (740) 593-1911, or [email protected].