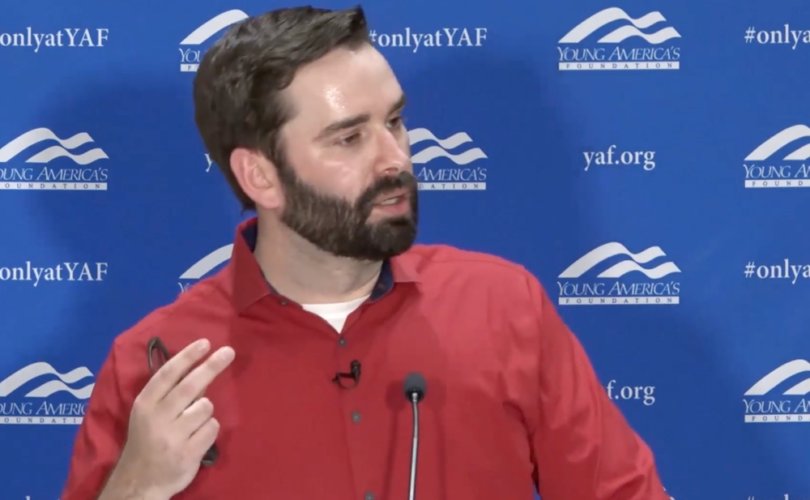 July 24, 2019 (LifeSiteNews) – When a man claims to be a woman it ultimately negates the meaning of womanhood, conservative commentator Matt Walsh said.

The left is denying the very existence of the female sex, he said, as it endeavors today to redefine gender.

Walsh spoke in April at Baylor University in Waco, Texas, amid controversy over his message on “the battle over life, marriage, and gender.”

“The left tells us that gender is a social construct,” Walsh said. “They reject the idea that women must necessarily have any particular feeling or thought or taste or preference.”

This throws the idea of what a woman is into question, he said.

“So if gender is an artificial construct, and our physical features have no bearing on our identity as man or woman, then what the hell is a woman anyway?” asked Walsh.

“A woman in that case would not be defined by her feelings, her thoughts, her ideas, her preferences, her body, her reproductive organs, her DNA, her chromosomes,” he continued. “Well, what is she defined by, what is she? Can anyone answer that?”

This logic leads to invalidating what a woman is, said Walsh.

“See, when a man says that he’s a woman, he’s now made it so that phrase means nothing,” he stated. “It doesn’t mean anything to be a woman.”

“He might as well say he’s a who’s-a-what’s it or a thing-a-ma-doodle,” Walsh added. “It’s just a word, it means nothing anymore.”

Some students at Baylor had attempted to get the appearance by the Daily Wire contributor, speaker, and author shut down, alleging he is “homophobic” and guilty of hate speech.

The Baylor chapter of Young Americans for Freedom invited Walsh, and despite the pushback, including a number of petitions and students tearing down flyers for the speech that had been authorized by Baylor’s student activities department, Baylor officials allowed the Walsh appearance.

“While Baylor is a university that supports and encourages free speech, we have an additional – and very important – responsibility as a Christian university, and that is to appreciate differing opinions and backgrounds in a respectful, compassionate manner that extends grace as Christ did,” Linda Livingstone, Baylor University president, said in an April 4 statement.

“We may not always agree, but we are still the Baylor Family,” Livingstone said. “And we all need to do better.”

Walsh’s remarks on the left denying womanhood were part of a portion of his talk refuting the argument for transgenderism.