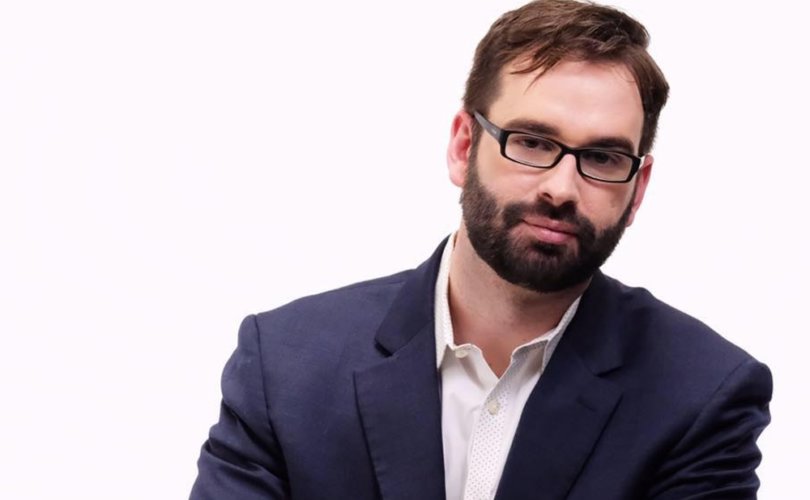 LOS ANGELES (LifeSiteNews) — Daily Wire podcaster, author, and Catholic homeschooling father Matt Walsh appeared on an episode of “Dr. Phil” this week to defend the moral and conservative perspective on transgenderism, stating that sex is a biological reality and arguing that individuals can’t require others to partake in the “theatrical production” of their “gender identity.”

In the episode which aired Wednesday, Walsh began in characteristic blunt style by calling a previous segment highlighting the show’s other guests — two LGBTQ activists who claim to be non-binary and are “married” to one another — “total nonsense.”

“Most of what we just heard in the previous segment was total nonsense, which is why when you were pushing for definitions and that sort of thing they were not able to provide it, because it’s just nonsensical,” Walsh said.

“As human beings we have a sex. Male or female. That is a biological scientific fact,” he continued, adding that “gender” is merely “a linguistic term.”

“Well, it’s got nothing to do with the reality,” Walsh answered. “You can feel however you want. I mean, I could sit here and say that I feel like a tomato plant but that doesn’t mean that I actually am those things.”

Walsh went on to explain that with regard to self-perception, individuals do not have the right to self-select the terms they want to use to define themselves and then require others to use those words.

.@mattwalshblog on gender pronouns: “You don’t get your own pronouns. That’s grammar. That’s language.” pic.twitter.com/iwmgzayWpR

“So you think it’s a delusion,” put in Dr. Phil, to which Walsh responded in the affirmative, adding it could also be a manifestation of mental illness.

Walsh also tackled the notion of transgenderism with regard to children, an issue which has increasingly gained national political attention as schools continue to introduce young children to the idea that sexuality is malleable.

The Catholic homeschooling father of four, who recently published a best-selling yet heavily censored children’s book which uses the allegory of a little boy pretending to be a walrus to blast the transgender movement, said “there’s also a basic confusion that a lot of kids have.”

“When you hear someone, a parent, say, ‘Oh, my four-year-old son came to me and said that I’m a girl now and I’m going to raise him as a girl’ — No. I have four kids,” Walsh explained, adding, “When a four-year-old boy comes to you and says, ‘Oh, I’m a girl,’ here’s a good follow-up question: ‘What is a girl?’”

The conservative commentator argued that what children usually mean when they make such claims is that they merely want “to do some of the things that girls do, like play with the dollhouse, or he likes the color pink.”

“That’s fine,” he said. “Play with the dollhouse. But you’re still a boy.”

Walsh said this problem of definition plagues “left-wing gender ideology,” since “no one who espouses it can even tell you what these words mean.”

To demonstrate, Walsh then asked the “non-binary” guests on the panel the same question he suggested parents pose to four-year-olds: “What is a woman? Can you tell me what a woman is?”

“No, I can’t,” admitted Ethan, one of the guests, “because it’s not for me to say. Womanhood looks different for everybody.”

Walsh then turned to the other guest, Addison, an LGBTQ activist and community organizer, challenging, “You stood up here and said, ‘Trans women are women.’ What is a woman?”

“Womanhood is … something that I cannot define,” Addison responded.

WATCH: @mattwalshblog asks transgender activist to define what a woman is on @DrPhil: pic.twitter.com/6DuzM6GaQ7

Walsh then engaged in a back-and-forth with Addison, challenging the transgender activist to answer, “What did you mean when you said, ‘Trans women are women’?”

“I do not define what a woman is because I do not identify as a woman,” Addison said. “Womanhood is something that is an umbrella term.”

Walsh continued to push Addison to provide some sort of definition of womanhood, with Addison refusing to give a concrete explanation and instead suggesting that womanhood is essentially a self-defined idea.

According to the activist, “each person” is “going to have a different relationship with their own gender identity and define it differently. So, trans women are women.”

“You won’t even tell me what the word means though, so that’s the problem,” Walsh said.

Addison then asserted that Walsh wanted to “reduce” biological sex to mere anatomical and chemical features.

“No,” Walsh fired back, “what you want to do is appropriate womanhood, and turn it into, basically, a costume that could be worn.”

Ethan and Addison have since shared on social media that they have experienced heightened anxiety, “depression spirals,” and nightmares as a result of Walsh challenging their views.

Contrary to my fellow panelists, I felt great after the taping and feel even better now. That’s because I’m 100 percent confident in my view on the topic and everything they said was blatant nonsense which did not for even a second cause me to second guess my own perspective. https://t.co/D1JQZ5Cbwr