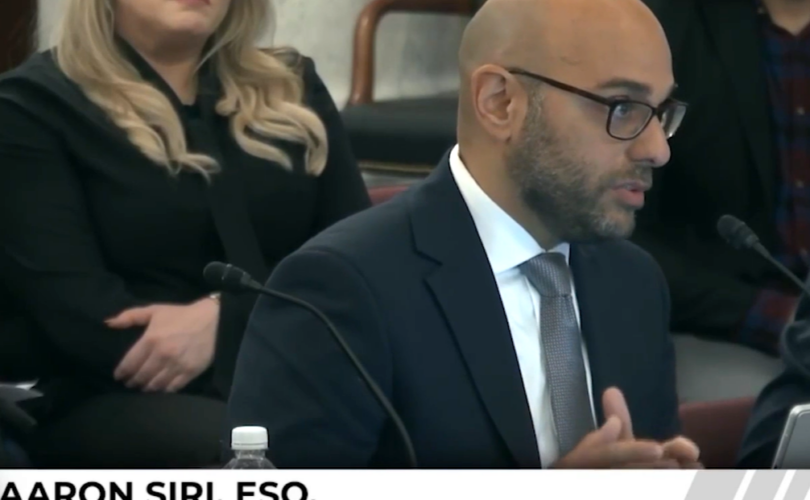 (LifeSiteNews) – One in 13 recipients of COVID-19 vaccines sought medical care afterward, according to data from the U.S. Centers for Disease Control & Prevention’s (CDC’s) V-Safe reporting system detailed this week at a roundtable hosted by Republican U.S. Sen. Ron Johnson of Wisconsin.

Among the speakers at the event was Aaron Siri, a civil rights attorney whose areas of focus include medical freedom. He used his time to detail what he found pursuing V-Safe information on behalf of the Informed Consent Action Network (ICAN).

He began by explaining V-Safe’s superiority to the federal government’s Vaccine Adverse Event Reporting System (VAERS) in that it has its participants undergo check-ins through which it is able to capture not just numbers of adverse events, but also a rate compared with overall shot recipients; and to clinical trials, because its 10-million participant pool is a significantly larger sample size.

However, Siri noted that V-Safe only collects symptom information for a week after injection, and its reporting form does not include boxes to check to report known issues such as myocarditis or pericarditis (though it does have a field for manually typing additional details), meaning it missed an “incredible opportunity to gather that information in a systematic way” – despite the fact that when the CDC launched V-Safe, it recognized such conditions as of “special interest” to COVID vaccine evaluation.

Even so, the most significant revelation from the program pertained to participants who reported seeking medical attention, including hospitalization, after getting injected.

“About 800,000 people reported needing medical care in the database of 10 million. That’s about 7.7 percent of people in V-Safe reported needing medical care,” Siri testified. “These are not people who signed up for V-Safe to report medical issues; most V-Safe users signed up before they had any medical issues, when they first got the shots, before they had any medical symptoms at all, at the behest of the CDC.”

“That is one in 13 people, yet the CDC did not pull the shot,” he continued. “Twenty-five percent of those people needed emergency care or were hospitalized, and another 48 percent sought urgent care. Also, another 25 percent on top of the 7.7 percent reported being unable to work or go to school.”

“Was the CDC transparent about this information? No,” Siri added. “It took us a year and a half of legal battles to get it, two lawsuits in federal court, only when they had no other choice did they finally reveal it.” What’s more, during that time period, the CDC “published study after study after study in which the only thing CDC revealed to the public was effectively what the medical care rate was in the first week after the shot,” despite that rate steadily increasing in subsequent weeks.

Many Americans harbor moral and practical reservations about the COVID-19 vaccines, given the use of aborted fetal cells in their development, the superiority of natural immunity, COVID’s low risk to most otherwise-healthy individuals, the vaccines’ failure to prevent infection, their accelerated development under former President Donald Trump’s Operation Warp Speed initiative giving them only a fraction of the evaluation and development time vaccines normally take, the lack of transparency from their manufacturers, and mounting evidence of serious adverse effects.

VAERS reports 35,616 myocarditis and pericarditis cases as of November 25. An April study out of Israel indicates that COVID infection alone cannot account for such cases, despite claims to the contrary. Reports submitted to VAERS about possible side effects are unconfirmed, as anyone can submit a report, but CDC researchers recognize a “high verification rate of reports of myocarditis to VAERS after mRNA-based COVID-19 vaccination,” leading to the conclusion that “under-reporting is more likely” than over-reporting.

But VAERS is not the only data source indicating cause for concern. Data from the Pentagon’s Defense Medical Epidemiology Database (DMED) has been similarly alarming, showing that 2021 saw drastic spikes in a variety of diagnoses for serious medical issues over the previous five-year average, including hypertension (2,181%), neurological disorders (1,048%), multiple sclerosis (680%), Guillain-Barre syndrome (551%), breast cancer, (487%), female infertility (472%), pulmonary embolism (468%), migraines (452%), ovarian dysfunction (437%), testicular cancer (369%), and tachycardia (302%).

Ron Johnson, who narrowly won re-election last month, is one of both the U.S. Senate’s and the Republican Party’s most aggressive watchdogs on the issue of COVID-19 vaccine mandates and medical dangers.