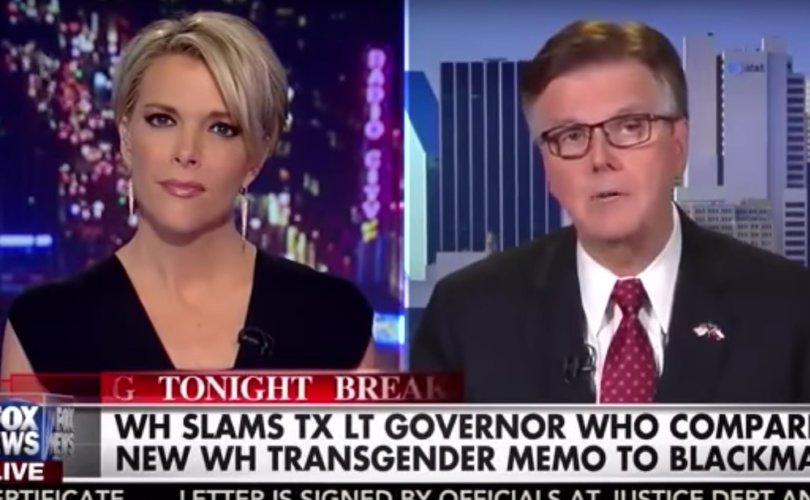 WASHINGTON, D.C., May 16, 2016 (LifeSiteNews) – Although it has a reputation as the lone conservative television network, Texas Lt. Gov. Dan Patrick found himself in a testy segment with Megyn Kelly last Friday. Observers say Kelly was “uncharacteristically rude and disrespectful” to him, asking if he “had a problem” with men using the women's restroom before cutting him off in mid-sentence.

The lieutenant governor made national headlines when he boldly rejected Barack Obama's federal transgender guidance requiring all public schools in the nation to allow members of one biological sex to use the locker rooms, showers, and restrooms as members of the opposite sex or lose federal funding. Texas would give up the $10 billion in federal funds rather than trade the safety of its young people for “30 pieces of silver,” he said.

On “The Kelly File” on Friday night, Lt. Gov. Patrick said the proposed policy would do nothing to “enhance education in our country. It won't improve reading skills or math scores. It won't help kids graduate. This will do nothing but be more disruptive to our schools.”

Kelly asked him to engage in “a back-and-forth” with her, rather than a one-sided filibuster.

“This is what the other side says,” she said. “'This is the reality of life in 2016 in America, that we are finally getting to the point where we recognize that there are trans women, trans men, trans girls, trans boys, and that they have been stifled and tortured in a way.'”

The host attempted to draw Patrick out on why he opposed the policy.

“It goes against common sense, common decency, privacy,” he said in time, adding that it creates “a great loophole for all the sexual predators and sex offenders.”

Kelly countered that sexual molesters who prefer members of the same sex would not be affected by the policy.

He noted his role in defeating a similar bill in heavily Democratic Houston, saying the ordinance, which voters rejected in a landslide, “would have allowed men in ladies' rooms.”

Lt. Gov. Patrick explained that the Obama administration guidelines “would allow any man, at any time, dressed in any way, to go into a bathroom” with an unprotected young girl.

“Do you have a problem with that?” Kelly asked. “Is this a problem with men potentially donning women's clothing so they can sneak into [women's facilities]?”

There have been numerous instances of men saying they are transgender in order to gain access to women's facilities, and sometimes assault women, in the United States and Canada.

Patrick noted that under the Obama administration's guidance, “gender noncomforming” people need not look like members of the opposite sex.

As the Texas Republican said President Obama was wrong to intervene in local school matters, Kelly continually said, “I got it” before cutting him off in the middle of his discussion to hear from two panelists.

“Kelly was uncharacteristically rude and disrespectful to the Texas Republican, eventually cutting away from him in mid-sentence,” wrote Tom Tillison at BizPac Review.

Kelly, who took over her time slot from Sean Hannity, has been accused of pro-LGBT bias in the past.

In 2011, Megyn Kelly criticized Fox News expert Dr. Keith Ablow over a column he wrote about journalists' coverage of gender dysphoria, in which he accused the media of “mainstreaming the journey of a very disordered person.”

“You seem to be adding to the hate,” Kelly told Dr. Ablow in an interview on Fox News.

She also attended a 2010 fundraiser for the National Lesbian and Gay Journalists Association, a group that strategizes with journalists about how best to advance the LGBT agenda in print, radio, and television without setting off alarm bells.

Peter LaBarbera of Americans for Truth wrote a 92-page report documenting what he perceived to be biased statements from Megyn Kelly regarding LGBT issues.