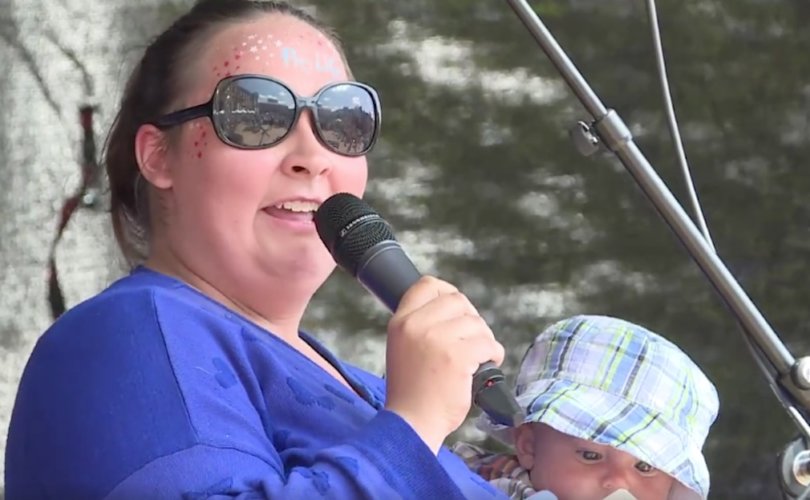 BIRMINGHAM, United Kingdom, May 25, 2016 (LifeSiteNews) – Faced with social workers telling her to either abort her baby or have her first son apprehended, a young British woman cancelled her abortion anyway after a chance encounter with last year’s March for Life, she tearfully recounted at this year’s event.

“Who was here at last year’s march?” Sophie Johnstone asked several thousand Marchers from the podium on May 14. “Please show me.” And looking down at her six-month-old son, she said through tears, “Riley’s here because of last year’s march.”

“It was quite an amazing thing that really touched a nerve,” March for Life spokesman Ben Thatcher told LifeSiteNews. “This shows the power of public witness; that we can have a life-changing presence.”

This year’s was the third national March for Life, held in Birmingham because of its central location and because it was where Britain’s leading abortion provider, the British Pregnancy Advisory Service, got started.

In Sophie’s short speech she told how she was walking home from the BPAS clinic where she had booked her abortion “for the following Tuesday” when she “saw a lot of people marching and I saw that blue banner over there (indicating a banner with the message: ‘It’s not a choice, it’s a life’” and a picture of a baby.

She mingled, she listened to speeches, spoke to some people and left. “I still had it in my head that I was still due to have an abortion,” she told the crowd a year later. But “the first thing I did when I got home, I called BPAS and I cancelled my abortion.”

Sophie has told March for Life organizers more. According to Thatcher, she met not only joyous and peaceful pro-life marchers, but angry and obscene pro-abortion demonstrators. “She saw her options laid out in front of her: one of love, and one of hate,” he said.

“It absolutely was that,” Sophie told LifeSiteNews. But it was also, she admits, because she has a stubborn streak.” Only 20 years old and battling depression, already raising her baby boy Tyler, and with a boyfriend who was, at that point, very self-centred and uninterested in fatherhood, she had been told by child protection services she was unfit to care for a second child.

“The social worker told me I could keep Tyler if I had an abortion, or have the baby and they would take Tyler,” she told LifeSiteNews.

After Sophie had Riley, the social worker kept her word and applied for an apprehension order from the courts. “The judge said she was wrong,” Sophie told LifeSiteNews. “He said there were plenty of moms with depression.”

Now she is getting help for her depression, and is planning to become an emotional and family support counsellor. A target of childhood abuse, she is also organizing an event for other victims.

On Tuesday Sophie and Riley’s father got engaged. “I’m very pleased. I didn’t think it would happen,” she told LifeSiteNews. Riley’s father stayed away for three months after his son's birth but gradually has grown attached to her.

Asked what she would tell another woman with an unwanted pregnancy, Sophie said, “What that sign said: ‘It’s not a choice, it’s a life.’ It is a baby. There are options, such as adoption, such as coping. There are always places to help.”

Already she has put her new convictions to work counselling a friend who got unexpectedly pregnant in March. “She was suffering personal depression,” said Sophie, and planned an abortion. “I encouraged her not to,” and so far, so good.