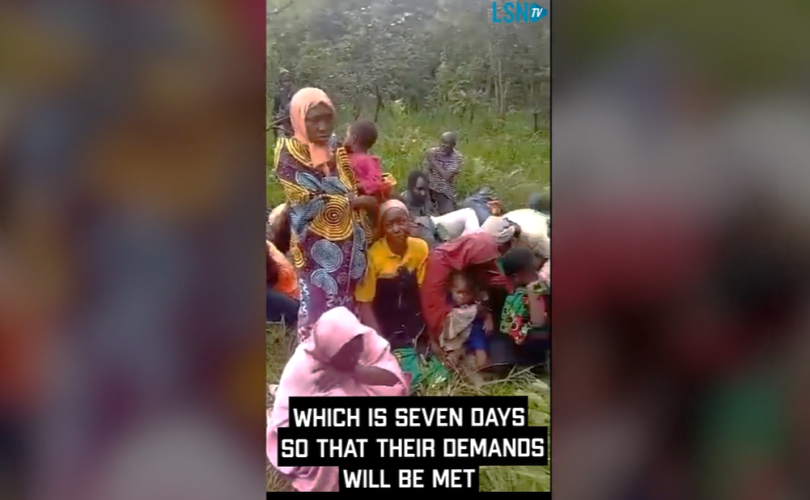 KADUNA, Nigeria (LifeSiteNews) — New footage has emerged from the remaining kidnapped victims of an Islamist train attack near the Nigerian capital of Abuja.

With terrorists standing armed in the background, several Christian and Muslim captives from the March 28 attack plead for help in the ransom video.

“We are the passengers from Abuja to Kaduna on 28 March 2022 who were kidnapped since that time,” one of the men explains. “We are the ones who know what is happening to us. There are women, men, old people and children who are sick, and some of us are getting old already and are sick. Please, we are calling on our brothers and sisters to come to our aid, particularly the government to please listen to the demands of the terrorists.”

One woman named Gladys explains how she worked for the Defense Industrial Cooperation of Nigeria; another reports working for the Independent National Electoral Commission, and a third younger woman tells the interviewer she studied agriculture at a nearby Kaduna university.

“I am talking on behalf of the students — the government should please hear our cry and come to our aid,” the student begs.

Seven victims were subsequently released Wednesday after 135 days in captivity, but it is not known if a ransom was paid to secure their freedom.

Nigerian President Muhammadu Buhari, who is from the same Fulani tribe as the Islamic terrorists, has faced intense pressure to secure the release of the remaining 35 captives. He met with some of the freed victims on Thursday in Abuja.

His government will not pay ransoms, however, and is allegedly preventing family members from paying for their loved ones’ release.

The video follows disturbing footage last month of captives being flogged with sticks and canes by the terrorists.

The group was kidnapped on March 28 when a train traveling from Abuja to Kaduna was attacked by the Fulani terrorists, who blew up the tracks, killed several passengers and abducted 61 victims.

Local newspapers reported one Islamic terrorist goading the Nigerian government in last month’s footage, saying, “They can’t do anything. Are you not relying on guns? Your aircraft and your guns are like spider’s web to Allah. We are for Allah, we are doing it for Allah. We are not afraid of anybody.”

“You should know that this is a little that you’ve seen. Know that, if our demands are not met, this place will become an abattoir,” the Fulani Islamist warned.

Like this week, three men and two pregnant women were released shortly after the July video surfaced.

President Buhari, who is in his last term, has been heavily criticized by the country’s Christian population for his alleged indifference to the persecution they are suffering throughout much of the country.

With a presidential election approaching in February 2023, one Nigerian source told LifeSiteNews that the country is close to civil war, as Catholic candidate Peter Obi sees his popularity grow.

“Like at the last election, many poor Christians will be offered bribes to vote for the Muslim candidate,” the source predicted.