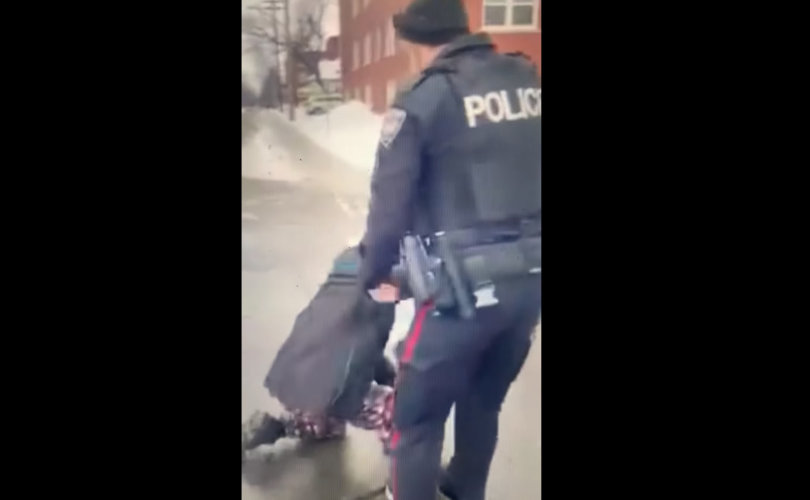 OTTAWA, Ontario (LifeSiteNews) — An Ottawa police officer was caught on video restraining and arresting an elderly man after he was pulled over for merely honking his horn in support of the Freedom Convoy protest.

In a widely-circulated video clip, a short-statured elderly man can be seen being physically restrained and arrested by a much larger Ottawa police officer, as onlookers film the encounter and accuse the two officers present of being complicit in “communism.” According to statements made by the police in the footage, the encounter started after the man was pulled over for honking his horn.

As the video starts, the old man can be heard shouting expletives as the officer directs him to the rear of his vehicle. The man mentions that the interaction started because he “tooted the horn” and the police officer agrees by affirming “that is why you’re pulled over.”

The person filming the video decries the occurrence as the enforcement of “communism,” while saying that honking the horn is not an “offense,” at which point the officer says he is wrong and that it is “an offense to beep your horn.”

The elderly man proceeds to open the trunk of his minivan to retrieve his wallet, and appears to start rifling through the wallet looking for identification, while the man filming tells the officer to “stop harassing old men.”

The situation escalates after the elderly man appears to decide against providing his ID to the officer and proceeds to walk back towards the driver’s side of his vehicle. In short order, the officer grabs the elderly gentleman, twists his arm behind his back, and causes the senior to stumble to the ground.

Shortly after, another officer appears on scene as the initial officer continues to press the old man against his van and place handcuffs on him.

The video continues with both police officers escorting the elderly man down the street in handcuffs towards a police cruiser, as the man filming and others follow behind shouting “Shame on you” and a variety of other statements and expletives.

The interaction ends with the police officer threatening to arrest those objecting to the arrest, at which point a woman convinces the person making the video to disengage from the situation and walk away.

The arrest seems to be linked to the crack down by the Ottawa police and the City of Ottawa, who have been attempting to squash the peaceful protest since it started two weeks ago.

While media and government continue to insist that many of the protestors are “racists” with some going as far as accusing those engaged in the protest of attempting an “insurrection,” footage on the ground showing children playing in bouncy castles has painted a radically different picture.

Meanwhile, a person wearing a mask alone in their car was arrested last weekend in Winnipeg after intentionally running over four pro-freedom protestors at a rally in support of the Ottawa convoy, further adding skepticism to the mainstream narrative.

Despite Trudeau’s statements that the protestors trying to have all COVID mandates ended are a “small fringe minority,” a recent poll has found that over half of Canadians support the government axing all public health restrictions.