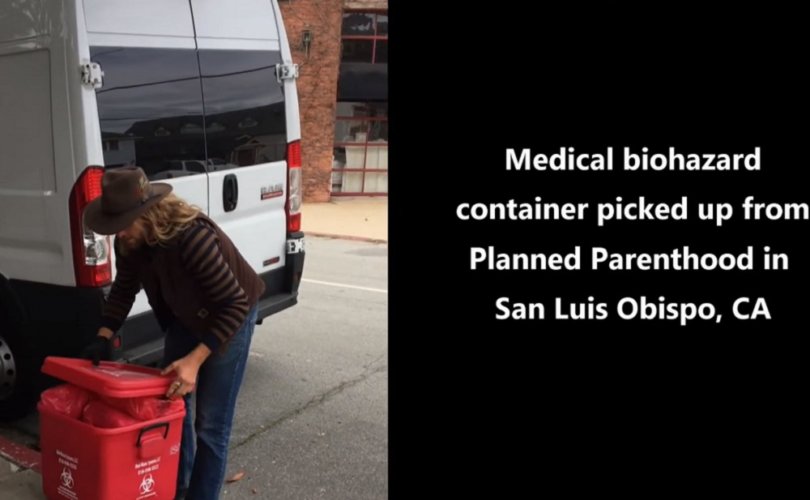 SAN LUIS OBISPO, California, March 18, 2020 (Operation Rescue) — Abortion facilities struggle across the nation to find vendors who will pick up and transport the remains of aborted babies for proper disposal.

However, in San Luis Obispo, California, Planned Parenthood appears to have scraped the bottom of the barrel when it comes to biohazard human tissue disposal, and has raised red flags with local pro-life activists.

A new video taken on March 10, 2020, by pro-lifer Teresa Marsano shows a man hoofing it to an unmarked van with a red biohazard tub he picked up from Planned Parenthood.

The plastic red tote looked heavy. It was so full of bulging biohazard bags that the lid teetered precariously on top of the pile and could not be properly closed.

When the man stopped to load the overfilled tote into the back of an awaiting van, he was forced to adjust other red totes that had shifted and tipped over inside.

So, what would happen if the over-loaded tote with the unsecured lid shifted during transport as well?

Marsano said that there was a woman in the passenger seat of the van kicked back with feet on the dash. The couple seemed completely unprofessional, which made her question if they actually knew what they were doing or whether they had been properly trained to handle biohazard material that likely contained human tissue.

There were no markings on the vehicle. The man who picked up the tote from Planned Parenthood indicated that the van was new and that biohazard stickers had been ordered. There was nothing to indicate the company that was responsible.

“We have seen abortion facility biohazard containers picked up under suspicious circumstances before. This appears to be the ‘new normal’ for Planned Parenthood and other abortion clinics, as waste control companies attempt to distance themselves from doing business with abortion facilities,” said Troy Newman, President of Operation Rescue.

Marsano plans to file complaints with the appropriate agencies.