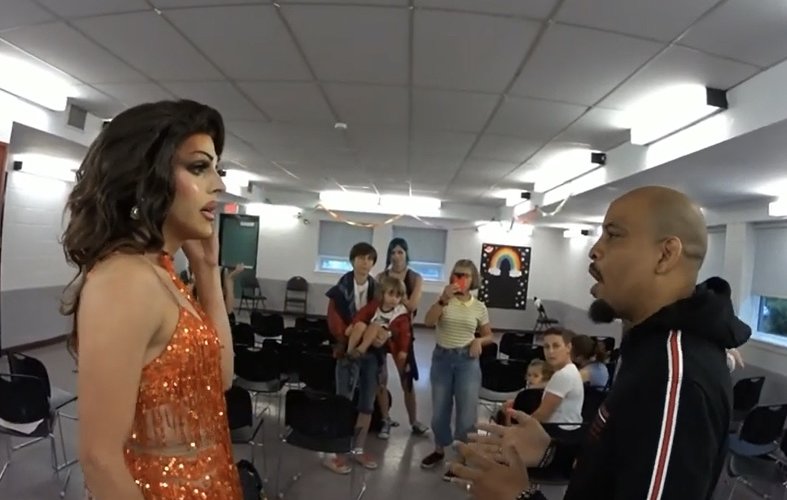 After this event at Westcliffe Community Centre in Ottawa on Saturday afternoon, Evangelical street preacher Dorre Love responded to an invitation for questions.

“I have a question,” Love said. “What are you going to do when you stand before God and He judges every one of you here for your sins?”

A video published on Facebook shows the surprised, unhappy faces of a few parents and Russian-Canadian drag performer “Adrianna Exposée,” 20, as well as a small number of children. Moments before, parents and children had been dancing with the scantily-clad Adrianna or watching from their seats.

“What are you going to do?” a woman snapped back to Love.

“The Bible says this,” Love continued, “but if anyone causes one of my little ones who believe in me to stumble, it would be better for them to have a large millstone be hung around their neck and they be drowned in the depths of the sea.”

The parents booed him. Two of the adult women present asked him and his supporters to leave. One threatened to call the police.

“The Bible says that men are men and women are women,” he said as two mothers picked up their children and fled.

One hand on hip, Adrianna Exposée confronted the preacher. Love told the performer that the Lord had sent him to tell him to turn “from (his) wicked ways and repent,” for he was going to stand before God and be judged.

Exposee suggested that Love had no place talking about “wicked ways” as he had interrupted a children’s event.

“Look how you’re dressed,” Love said to the performer. “You’re dressed like a whore in front of children. Are you teaching children to be whores?”

As the parents reacted angrily, Love told them that they were abusing their children by bringing them to the event.

“Everyone here needs to repent, turn from your wicked ways and accept Jesus Christ as your Savior,” Love said.

Exposée and the parents continued to remonstrate with Love, as one of his fellow protesters explained that they loved the audience and didn’t want them to go to hell.

“Let he who is without sin cast the first stone,” snapped a parent. Another chanted, “Love is love” at Love.

He said that if they did not believe in Jesus Christ, they would be thrown in a lake of fire.

Love and his supporters were followed outside by various parents, who continued to photograph or film them.

The entire altercation lasted about 13 minutes.

Although one of the participants claimed that the Drag Queen Story Time was a private event, it was advertised publicly as a “magic storytime experience” for children aged 3 to 10. There was no entrance fee.

According to the Canadian Broadcasting Corporation, police arrived and asked the protestors to leave the area. Meanwhile, the drag queen told the CBC that his group had rented out the space and found the interruption “inappropropriate.”

“I found it very inappropriate,” Exposee said. “We did rent out the space for ourselves to educate kids on what we believe, which is inclusion, diversity and love.”

“I’m open to hearing all opinions, always,” he continued. “I am a very open-minded person, but to come in here, in that way, in that manner — it was hateful.”

LifeSiteNews attempted to reach out to Love, but as yet has not received a response.