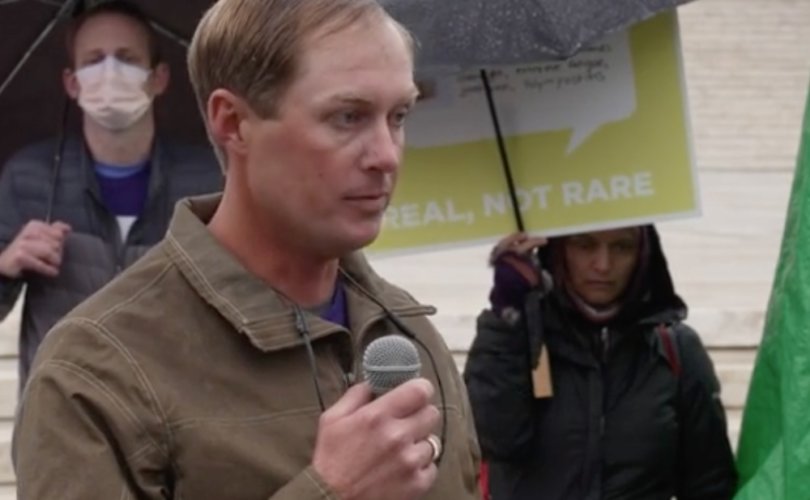 Pilot Cody Flint described his COVID injuries at a rally in Washington, D.C.Screenshot/LifeSiteNews

WASHINGTON, D.C (LifeSiteNews) — An agricultural pilot from Mississippi has developed life altering adverse effects after taking the COVID vaccine, ruining his dreams for his family’s future.

“I had built an incredible future for my family, and it is gone—like that,”  he said Cody Flint.

Flint was one of the dozens of vaccine victims who testified on the steps of the Supreme Court yesterday at the “Freedom of Choice” Rally in the national capital.

The 33-year-old pilot gave a 10-minute-long testimony in the rain and made a moving plea for parental consent.

Flint got his first dose of the Pfizer COVID vaccine on February 1, 2021, and within thirty minutes developed a severe headache which later became “a burning sensation” in his neck and a “feeling of being drunk.”

The pilot initially thought that the reaction was normal and would go away.

Only two days after getting vaccinated, Flint had to perform an emergency landing (which he no longer recalls) after experiencing severe tunnel vision whilst flying.

His doctor diagnosed him with vertigo and a severe panic attack.

“I’ve never had a history of either of these,” said Flint, who had always been very healthy before getting his COVID shot.

“I’ve never even had the flu.”

Flint recalled that his doctor offered no advice when he told him that he had been vaccinated two days before the incident.

“I told him I had just been vaccinated, and it went in one ear and ran out the other.”

The doctor prescribed Flint medicine and assured him that he would be “completely better” in two days.

After running a pallet of tests on Flint, including CT scans, MRI scans, and a lumber puncture, the specialists diagnosed him with Perilymphatic Fistula, which is a rupture of the inner ear.

“Both of [my inner ears] ruptured at the exact same time,” said Flint.

“That only occurs in car accidents or major head traumas, I obviously did not have that…”

After running a lumbar puncture, the specialists concluded that Flint was suffering from adverse reaction to the Pfizer vaccine.

— Article continues below Petition —
BOYCOTT United over religious and medical COVID vaccine exemptions
Show Petition Text
21694 have signed the petition.
Let's get to 22500!
Thank you for signing this petition!
Add your signature:
Show Petition Text

As treatments were ineffective, Flint had to undergo surgery, after which he had to lie flat on his back for 6 weeks.

He became emotional when he recalled that his young children didn’t understand what was happening to him.

“They didn’t understand why that was happening.”

Another surgery on his other ear left him in a similar state for another 6 weeks.

“When I got this shot, I was in the prime of my life,” Flint said.

“I’d been working at the same flying service for 14 years,” he continued.

The crop-dusting pilot now suffers from frequent dizziness that makes it impossible for him to resume the life and career he had before his Pfizer shot.

“My career is over right as it was getting where I wanted it to be,” Flint said.

“I had built an incredible future for my family, and it is gone—like that,” he said.

Flint submitted an application to the Countermeasures Injury Compensation Program (CICP) and emailed both of his senators to ask them to contact the organization on his behalf.

“They have done that, and I cannot thank them enough for doing that, but they are getting the same answers I’m getting: ‘Your file is under review’,” he said.

The pilot echoed the sentiments of many other sufferers of vaccine injuries who say they are not being supported by health authorities and are left on their own to deal with their, sometimes extremely severe, adverse reactions. He denounced the shielding of vaccine manufacturers from liability from the moment they put their vaccines on the market.

“You can’t turn to them,” he said and then called out the U.S government for breaking its promise to help victims of vaccine injuries.

“[The government] accepted the responsibility to help us when they shielded these vaccine manufacturers. They are not helping us… They have no intention of helping us whatsoever,” Flint said.

Flint made it clear that he is pro-vaccine and not an anti-vaxxer but stressed the need for informed consent and spoke against the vaccine mandate.

“I am pro-vaccine: I went and got the vaccine as early as I possibly could, but you have to be able to weight the risk versus reward with this; you should not be mandated,” he said.

The 33-year-old father of two concluded his testimony by taking a strong stance against forced vaccination on children and, responding to news that some school boards and governments have begun mandating the jab for “eligible” children, making a powerful plea for parental consent.

“And now they’re mandating it to children! My children will never get this vaccine,” he said.

“It is absolutely absurd that children are being mandated to take this.”

Flint pointed out that there is currently not enough perspective on the vaccines to justify a mandate.

“What do we have, a year of long-term studies on this? One year?” he asked rhetorically.

“That’s crazy! I just cannot imagine that educated people are making these decisions,” he said and shared his suspicion that something “deeper” is happening.

“Keep the children in mind, please,” he pleaded. “That’s the most important thing at this point.”

Flint’s case is not an isolated incident. Other pilots have turned up for work with various adverse reactions shortly after getting the jab, as a senior army doctor reported at a recent panel on vaccine injuries held by Senator Johnson from Wisconsin.

These cases are often censored by the mainstream media.

Many airline pilots are also reluctant to take the vaccine, and have had to call-in sick or resign to avoid getting it, leading to thousands of flights being cancelled. Some airlines have blamed  the weather for the cancellations to conceal the pilot walkout.