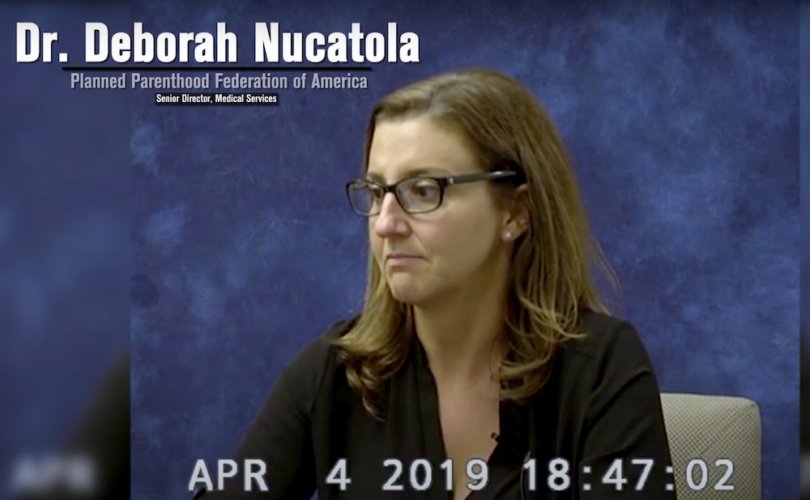 August 24, 2020 (LifeSiteNews) – The pro-life investigators of the Center for Medical Progress (CMP) released a new video today with even more footage from the sworn testimony of abortion industry officials, this time admitting that babies are sometimes delivered “intact” despite documenting the opposite intention on paper.

Most of the latest video concerns whether Planned Parenthood illegally altered abortion procedures in order to ensure that the resulting organs were in the best usable condition possible. In the 2015 videos, Nguyen can be heard explaining that while “we can never intend to complete the procedure intact…it happens,” which is fine so long as the original “intent” is documented.

“Laws are up to interpretation,” and “there are people who interpret it as intent,” Nucatola reasoned when she thought she was talking to like-minded colleagues. “So if I say on Day 1 I do not intend to do this, what ultimately happens doesn’t matter. Because I didn’t intend to do this on Day 1 so I’m complying with the law.”

In her April 2019 testimony, Nucatola claimed to have merely been “explaining how some lawyers interpret the law.” But she was also forced to admit that “if I was aware that it was a donation case, yes” she would alter what part of a baby she crushed with forceps, so as not to crush usable parts.

Gatter, meanwhile, had been caught on tape in 2015 admitting they sometimes alter procedures to “increase the odds that it will come out as an intact specimen,” which is “kind of violating the protocol that says to the patient, ‘we’re not doing anything different in our care of you.’” In her April 2019 testimony, she defended herself by drawing a distinction between the words “procedure,” “method,” and “technique.”

“Sometimes there was a lively discussion about whether it was permitted or not permitted to change the technique, and we were still debating that in Los Angeles when I left,” she said. “But by the time I met Mr. Daleiden and his associates I had evolved in my thinking to changing the technique to get better tissue was allowed.”

None of these defenses pass legal muster, CMP argues. For one thing, Planned Parenthood’s fetal tissue consent form explicitly says that patients “understand there will be no changes to how or when my abortion is done in order to get my blood or the tissue,” and the “federal law at 42 U.S.C. 289g-1 prohibits any changes to the ‘procedures used to terminate the pregnancy,’ and not simply ‘the procedure’ as a singular category.

The video also plays audio of a Fifth Circuit Court of Appeals judge rejecting the “intent” defense. “It’s not a matter of documenting it, it’s a matter of complying with the actuality of it,” the judge said.

“Planned Parenthood reflexively proclaims innocence to the public and to a compliant establishment press, but when Planned Parenthood abortion leadership is placed under oath, they testify to crimes against women and infants,” CMP founder David Daleiden said. “Criminality in the national taxpayer-funded abortion industry will continue to spread unless federal authorities hold them accountable once and for all.”

This latest video follows previous video from the testimony, in which the abortion industry officials admit they are aware of babies having been born alive, and suggest that they are murdered soon after.

CMP’s original bombshell expose of Planned Parenthood’s sale of aborted babies’ body parts occurred late into former President Barack Obama’s second term, so naturally the abortion giant didn’t have to worry about a federal investigation. Late in 2017, the Trump administration requested documents from the U.S. Senate Judiciary Committee’s review of the case, which led many pro-lifers to hope Planned Parenthood would finally face justice. But no charges were ever brought.

In June 2019, 67 members of Congress wrote to Attorney General William Barr and FBI Director Christopher Wray seeking an update on the investigation, but did not receive an answer. Earlier this month, 28 Republican lawmakers wrote another letter to Barr and Wray seeking an update, which has not yet received a reply either.