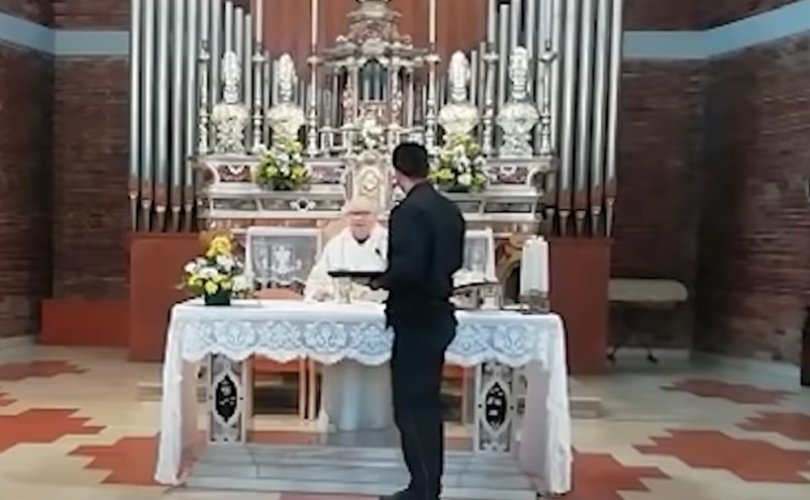 SONCINO, Italy, April 21, 2020 (LifeSiteNews) – Police interrupted a Mass celebrated with only 12 faithful present last Sunday in the northern Italian village of Soncino, close to Milan. A video shows a police officer talking to the priest, Don Lino Viola, right after the homily.

Moments later he returned, trying to get Viola to speak to the town’s mayor, who was on hold on the police officer’s the phone. However, the priest refused to bend to the will of the local authorities.

Cremona Oggi, a local online news outlet, spoke of “few faithful” present at the Mass, “only about fifteen, but still too many for the strict rules that have imposed the prohibition of religious celebrations and any other form of assembly.” Public Masses in Italy had been canceled due to the coronavirus pandemic back in March.

Mayor Gabriele Gallina said “it would have been enough” for Viola “to get the faithful out and continue the celebration.” However, the priest refused to do that.

The mayor explained that he had already talked to Viola on Sunday afternoon. “Nothing was broken, there is a good relationship between us, but it would have been enough to let the faithful go out, and perhaps everything would have gone smoothly.”

Don Lino Viola later clarified that there a grand total of 13 people were present in the church, including the priest. He pointed out that “six extra people” walked in while he was changing in the sacristy to get ready for Mass.

“They were a family who at that Mass commemorated some people who had died, plus a lady who had lost a relative to coronavirus two days earlier. It wasn’t human to send them out,” he emphasized.

The priest explained that the faithful were four meters apart from each other, even though most so-called social distancing guidelines only recommend about two meters, at most. Everybody was wearing masks.

While a fine of €280 was imposed on each of the faithful present for Mass, Viola told people not to pay. The priest, who was fined €680, said that “if anything, the parish will take care of it. I’m convinced that I haven’t created an assembly.”

He promised to talk to local authorities, specifically the Prefect of the Province of Cremona, “and I want to talk to a lawyer to understand if there hasn’t possibly been an abuse of power.”

La Nuova Bussola Quotidiana pointed out that police entering the church building and interrupting the celebration of Mass might actually constitute a violation of international law between Italy and the Vatican.

The agreement states that “the public authority may not enter for the exercise of its duties in buildings open to worship without having given prior notice to the ecclesiastical authority,” unless there is an emergency.

Bishop Antonio Napolioni of Cremona did not support his priest. A statement issued by the diocese on Monday called out Viola for “failure to comply with current emergency regulations prohibiting the celebration of Mass in the presence of the faithful.”

“With regard to the matter, the Diocese of Cremona, while aware of the intimate suffering and profound discomfort of so many priests and faithful due to the forced and prolonged deprivation of the Eucharist, cannot but emphasize with regret that the behavior of the parish priest is in contradiction with civil norms and canonical indications that for several weeks now have been affecting the liturgical and sacramental life of the Church in Italy and of our Church of Cremona,” the statement continued.

Instead of thanking Don Lino Viola for standing strong and defending the faithful present at the Mass, the diocese felt “the duty to thank all the priests of Cremona who, in this difficult period, have been able to express a deep sense of communion and ecclesial belonging also through the rigorous and precise respect of the current norms, aware of the responsibility that the Church has towards civil society and the health of our fellow citizens.”

Avvenire, an Italian daily newspaper owned by the Italian Bishops’ Conference, only reported on Bishop Napolioni’s statement. Prior to that, there was no article discussing the fact that a police officer had interrupted Mass.

The interruption of the Mass in Soncino was not the only case of government harassing priests amid the COVID-19 pandemic.

In mid-March, a priest in Marina di Cerveteri outside of Rome did not “have the chance to begin the concluding rite inside an empty church (but with faithful watching live on streaming) when two local police officers in antiviral masks swoop in behind the altar,” reported the New Daily Compass.

The police argued that “the parish priest had left the doors of his church open and outside in the churchyard, faithful had gathered in prayer. However, the few faithful present in the churchyard had kept a safe distance, far greater than the commonly known one-meter recommendation decreed by the Italian government.”

Archbishop Carlo Maria Viganò, the former Apostolic Nuncio to the United States, suggested that this case “may simply have been an excess of zeal by two local policemen, especially if they have to work under all the extra stress that has arisen since to coronavirus outbreak.”

“It must also be clear, though, especially in a country like Italy which signed a Concordat with the Church in 1929, that the ecclesiastical authorities have sole rights over places of worship,” Viganò explained. “The Holy See and the local Ordinary really ought to have protested over such a violation of the Lateran Treaty, which was confirmed again in 1984 and which is still in force.”

According to Viganò, “the authority of Bishops, given directly to them by God, melts away like snow and shows how cowardly they all are. This might lead to even worse abuses in the future if it is not corrected now. Let me take this opportunity to ask for a forthright condemnation of this unacceptable meddling by government forces in affairs which are the direct responsibility of the Church Authorities.”