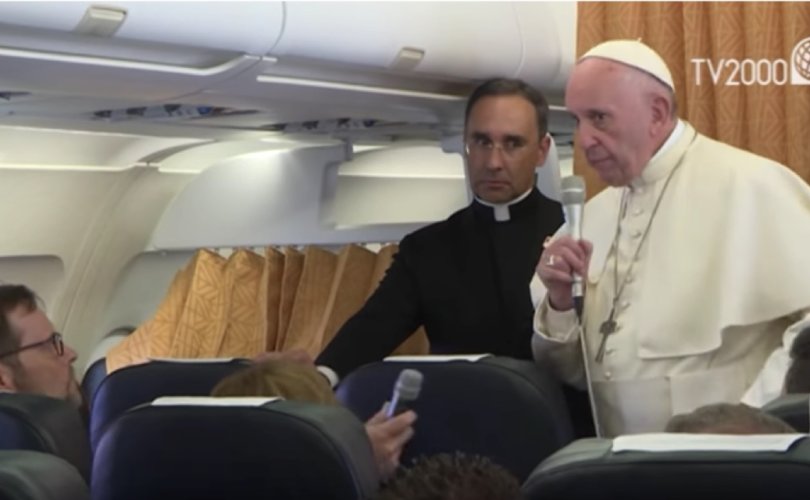 ROME, June 22, 2018 (LifeSiteNews) — During his inflight press conference on his return from Geneva yesterday, Pope Francis told reporters that it is up to individual bishops, and not bishops’ conferences, to determine whether a Protestant spouse who is married to a Catholic may receive the Holy Eucharist.

His comments come less than one month after the head of the Vatican’s doctrinal office, Archbishop Luis Ladaria, S.J., sent a letter to the German bishops with Pope Francis’ approval, rejecting their pastoral guidelines to allow Protestants in mixed marriages with Catholics to receive the Holy Eucharist in some cases, without needing to convert to Catholicism.

[Here is a video of the exchange. The question came from a German journalist:]

In the May 25 letter, the prefect of the Congregation for the Doctrine of the Faith informed Cardinal Reinhard Marx, president of the German bishops’ conference, that the text proposed by the German bishops’ “raises a number of significant issues,” saying the matter “touches on the faith of the Church,” effects ecumenical relations and the interpretation of Church law.

In his inflight comments on intercommunion yesterday, Pope Francis appeared to contradict the letter, saying the sticking point in the German bishops’ intercommunion proposal was “not so much the content” but only that it falls to the individual bishop of a particular diocese to decide the matter, and not the bishops’ conference.

On this point Pope Francis also seemed not to recollect properly Canon 844 §4 which speaks of both bishops’ conferences and individual bishops. Canon 844 §4 states that if:

… the danger of death is present or if, in the judgment of the diocesan bishop or conference of bishops, some other grave necessity urges it, Catholic ministers administer these same sacraments licitly also to other Christians not having full communion with the Catholic Church, who cannot approach a minister of their own community and who seek such on their own accord, provided that they manifest Catholic faith in respect to these sacraments and are properly disposed.

Edward Peters, a professor of canon law at Sacred Heart Major Seminary in Detroit, has pointed to weaknesses in Canon 844 in comments to the National Cathoilc Register in March, the main one being a broad interpretation of “grave necessity.”

Canon 844, he said, has “several terminological problems” that make it an “urgent candidate for reform.”

During his inflight press conference remarks, Pope Francis also referenced an exchange he had back in November 2015, during a visit to the Lutheran community in Rome, with a German Lutheran woman married to an Italian Roman Catholic. The woman said she and her husband “greatly regret being divided in faith and not being able to participate together in the Lord’s Supper” and asked what might be done to “finally achieve communion on this point?”

Recalling the exchange, the Pope said he responded to the woman “in the spirit of the Code of Canon Law, the spirit that they [the bishops] are now seeking.” Here is a video (with English subtitles) of their exchange:

At the time, Cardinal Robert Sarah, prefect of the Congregation for Divine Worship and the Discipline of the Sacraments, responded to the Pope’s exchange with the Lutheran woman, saying: “Intercommunion is not permitted between Catholics and non-Catholics. You must confess the Catholic Faith. A non-Catholic cannot receive Communion. That is very, very clear.” Cardinal Sarah added that he thought opening the doors to intercommunion would “promote profanation.”

While the Pope’s inflight comments have no magisterial weight, they open up a Pandora’s box of confusion and questions, including how a Protestant spouse can receive the Holy Eucharist without first receiving absolution for their sins in sacramental Confession.

Confession was in fact not mentioned in the German bishops’ intercommunion proposal. But as Cardinal Gerhard Müller, prefect emeritus of the CDF, told the National Catholic Register last month: “They don’t speak about it because they’re not interested in it.

Müller told the Register he believed some proponents of intercommunion “don’t understand what the true sense of the Eucharist is, as a sacrament of the altar.” For them, he said, “it’s only a sign of belonging together, an external sign” and said that “some of our theologians say we’re all redeemed by the common will of God, salvation for everyone, and the sacraments don’t have instrumental significance. They’re only a superficial form of expressing some feelings of friendship and in the end there’s no need for them.”

Here below is the text of Pope Francis’ comments on intercommunion during the inflight press conference.

Thank you, Holy Father. You often speak about concrete steps to be taken in ecumenism. Today, for example, you referred to it again, saying: “Let’s look at what’s possible to do concretely, rather than becoming discouraged over what isn’t.” The German bishops recently decided to take a step [regarding so-called “inter-Communion”], and so we are wondering why Archbishop Ladaria [Prefect of the Congregation for the Doctrine of the Faith] wrote a letter that seems a bit like an emergency brake. After the meeting on May 3, it was said that the German bishops should find a solution, possibly unanimously. What are the next steps? Will an intervention by the Vatican be necessary to clarify the matter, or will the German bishops have to find an agreement?

Good. This is not a novelty, because what the German bishops were talking about is foreseen in the Code of canon law: Communion in special cases. And they were looking at the issue of mixed marriages: if it is possible or not possible. However, the Code says that the bishop of the particular Church — this word is important, particular, if it is a diocese — has to handle this: it’s in his hands. This is in the Code. The German bishops, since they had seen that the case was not clear, and also that some priests were doing things not in accord with the bishop, wanted to study this matter, and they carried out this study which — I don’t wish to exaggerate — was more than a year long study, I don’t know exactly but more than a year, well done, well done.

And the study is restricted: what the bishops wanted was to say clearly what is in the Code. And having read it, I say: this is a restrictive document. It was not an “opening to everyone.” No. It was well thought out, with an ecclesial spirit. And they wanted to do it for the local Church: not the particular one. They didn’t want that. The thing slipped there, that is, saying that it is for the German Episcopal Conference. And there’s a problem there, because the Code doesn’t provide for that. It provides for the diocesan bishop, but not for the episcopal conference.

Why? Because something approved in an episcopal conference immediately becomes universal. This was the difficulty in the discussion: not so much the content, but this. They sent the document; then there were two or three meetings of dialogue and clarification, and Archbishop Ladaria sent that letter, but with my permission, he did not do it on his own. I said to him: “Yes, it’s better to take a step forward and say that the document is not yet mature — that is what the letter said — and that the matter needed to be studied more.” Then there was another meeting, and in the end they will study the thing. I believe that this will be a guiding document, so that each of the diocesan bishops can handle what is already permitted under Canon Law. There was no putting the brakes on it, no, no. It was a matter of handling the thing so that it might go down the right path.

When I visited the Lutheran Church in Rome, this sort of question was asked and I responded according to the spirit of the Code of Canon Law, the spirit that they [the bishops] are now seeking. Perhaps the right information wasn’t given at the right time, there is some confusion, but that is the thing. In the particular Church, the Code allows it. In the local Church, it cannot, because it would be universal. That is what this is all about.

The local Church is the [Bishops’] Conference?

… it is the Conference. But the Conference can study it and provide guidelines for helping the bishops to handle the particular cases. Thank you.